The public renders a harsh judgment on the state of political discourse in this country. And for many Americans, their own conversations about politics have become stressful experiences that they prefer to avoid. 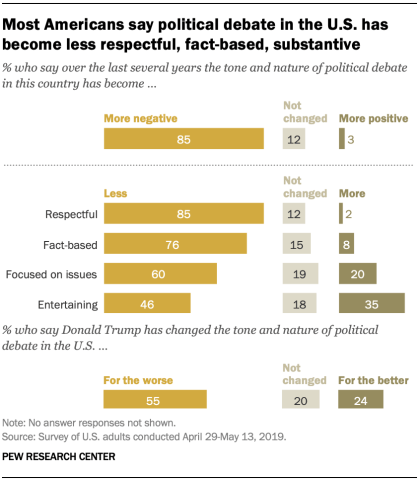 Large majorities say the tone and nature of political debate in the United States has become more negative in recent years – as well as less respectful, less fact-based and less substantive.

Meanwhile, people’s everyday conversations about politics and other sensitive topics are often tense and difficult. Half say talking about politics with people they disagree with politically is “stressful and frustrating.”

When speaking with people they do not know well, more say they would be very comfortable talking about the weather and sports – and even religion – than politics. And it is people who are most comfortable with interpersonal conflict, including arguing with other people, who also are most likely to talk about politics frequently and to be politically engaged.

Donald Trump is a major factor in people’s views about the state of the nation’s political discourse. A 55% majority says Trump has changed the tone and nature of political debate in this country for the worse; fewer than half as many (24%) say he has changed it for the better, while 20% say he has had little impact.

Perhaps more striking are the public’s feelings about the things Trump says: sizable majorities say Trump’s comments often or sometimes make them feel concerned (76%), confused (70%), embarrassed (69%) and exhausted (67%). By contrast, fewer have positive reactions to Trump’s rhetoric, though 54% say they at least sometimes feel entertained by what he says.

Pew Research Center’s wide-ranging survey of attitudes about political speech and discourse in the U.S. was conducted April 29-May 13 among 10,170 adults. Among the other major findings: 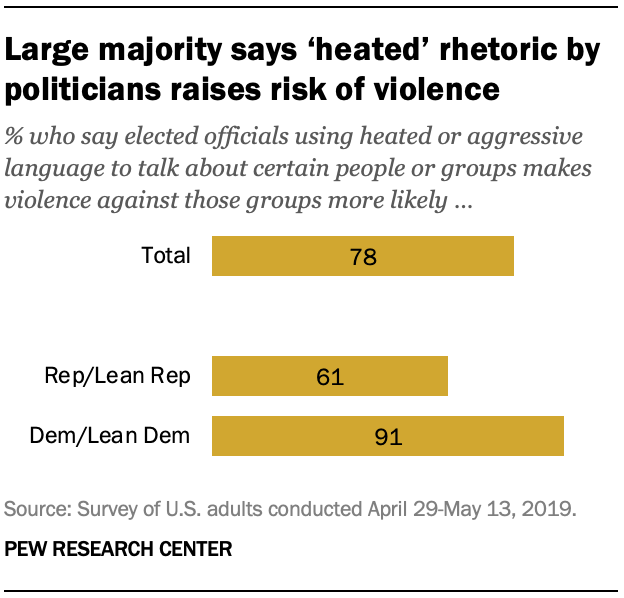 Broad agreement on the dangers of “heated or aggressive” rhetoric by political leaders. A substantial majority (78%) says “heated or aggressive” language directed by elected officials against certain people or groups makes violence against them more likely. This view is more widely shared among Democrats and Democratic-leaning independents than Republican and Republican leaners. 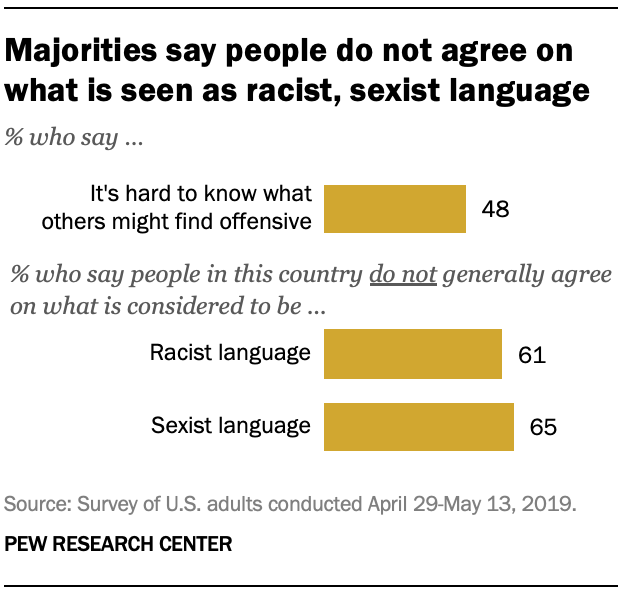 Uncertainty about what constitutes “offensive” speech. As in the past, a majority of Americans (60%) say “too many people are easily offended over the language that others use.” Yet there is uncertainty about what constitutes offensive speech: About half (51%) say it is easy to know what others might find offensive, while nearly as many (48%) say it is hard to know. In addition, majorities say that people in this country do not generally agree about the types of language considered to be sexist (65%) and racist (61%).

Talking about Trump with people who feel differently about him. The survey asks people to imagine attending a social gathering with people who have different viewpoints from theirs about the president. Nearly six-in-ten (57%) of those who approve of Trump’s job performance say they would share their views about Trump when talking with a group of people who do not like him. But fewer (43%) of those who disapprove of Trump say they would share their views when speaking with a group of Trump supporters. 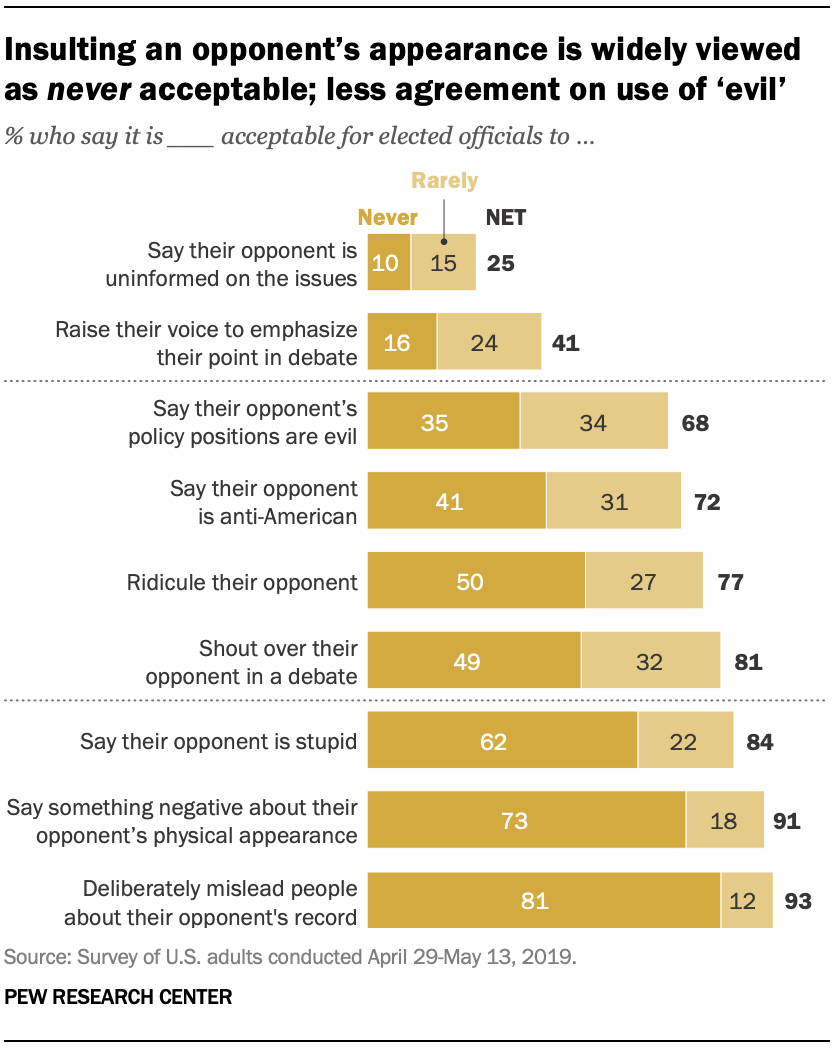 While Americans decry the tone of today’s political debates, they differ over the kinds of speech that are acceptable – and off-limits – for elected officials to use when criticizing their rivals.

Some language and tactics are viewed as clearly over the line: A sizable majority (81%) says it is never acceptable for a politician to deliberately mislead people about their opponent’s record. There is much less agreement about the acceptability of elected officials using insults like “evil” or “anti-American.”

Partisanship has a major impact on these opinions. For the most part, Democrats are more likely than Republicans to say many of the insults and taunts are never acceptable. For example, 53% of Democrats say it is never acceptable for an elected official to say their opponent is anti-American; only about half as many Republicans (25%) say the same.

As with views of whether elected officials should “respect” their opponents, partisans hold the opposing side to a higher standard than their own side in views of acceptable discourse for political debates.

Large shares have negative reactions to what Trump says

Majorities of Americans say they often or sometimes feel a range of negative sentiments – including concern, confusion, embarrassment and exhaustion – about the things that Trump says.

Positive feelings about Trump’s comments are less widespread. Fewer than half say they often or sometimes feel informed, hopeful, excited and happy about what the president says. A 54% majority says they at least sometimes feel entertained by what Trump says, the highest percentage expressing a positive sentiment.

Democrats overwhelmingly have negative reactions to Trump’s statements, while the reactions of Republicans are more varied. Among Democrats and Democratic-leaning independents, at least 80% say they often or sometimes experience each of the seven negative emotions included in the survey.

A 59% majority of Republicans and Republican leaners say they often or sometimes feel concerned by what Trump says. About half also say they are at least sometimes embarrassed (53%) and confused (47%) by Trump’s statements.

By contrast, large majorities of Republicans say they often or sometimes feel hopeful (79%), entertained (78%), informed and happy (76%) and other positive sentiments in response to the things Trump says.

No more than about 10% of Democrats express any positive feelings toward what Trump says, with two exceptions: 17% say they are often or sometimes informed, while 35% are at least sometimes entertained. 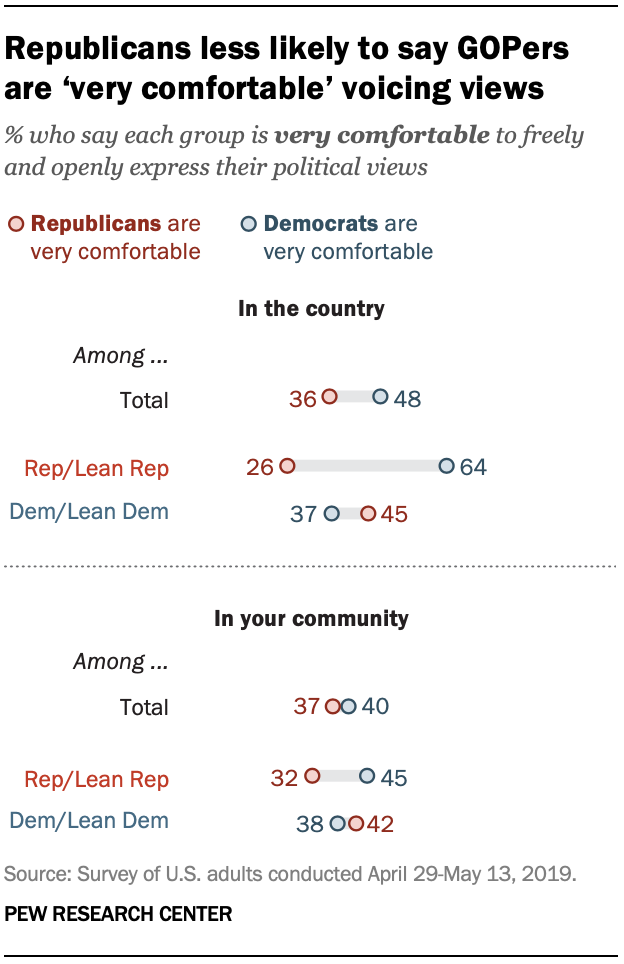 Republicans say that members of their party across the country are less comfortable than Democrats to “freely and openly” express their political views. In addition, Republicans are far more critical than Democrats about the climate for free expression in the nation’s educational institutions – not just colleges, but also community colleges and K-12 public schools.

There are smaller partisan differences when it comes to opinions about how comfortable Republicans and Democrats are expressing their views in their local communities. Yet these opinions vary depending on the partisan composition of the local community. Republicans and Democrats living in counties that Trump won by wide margins in 2016 are more likely than those in evenly divided counties (or those that Hillary Clinton won decisively) to say Republicans are very comfortable expressing their views. 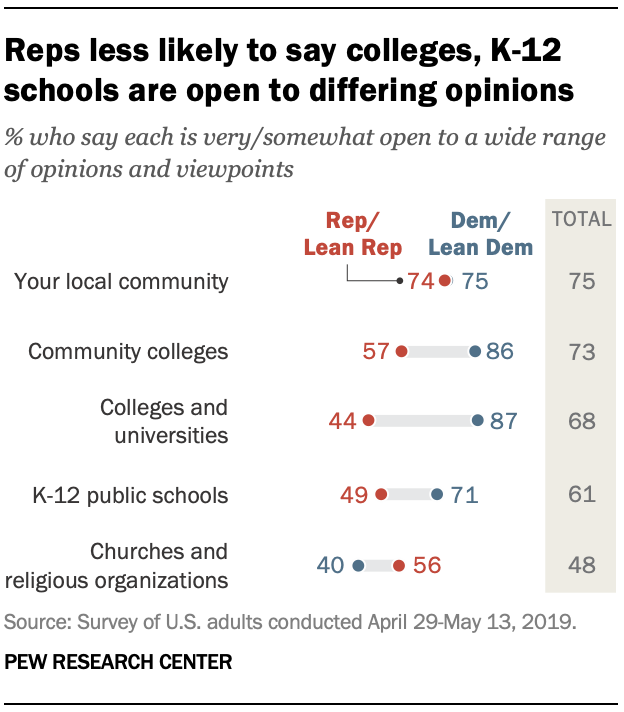 Republicans’ concerns about the climate for free speech on college campuses are not new. The new survey finds that fewer than half of Republicans (44%) say colleges and universities are open to a wide range of opinions and viewpoints; Democrats are nearly twice as likely (87%) to say the same.

Republicans also are less likely than Democrats to say community colleges and K-12 public schools are open to differing viewpoints. By contrast, a larger share of Republicans (56%) than Democrats (40%) say that churches and religious organizations are very or somewhat open to a wide range of opinions and viewpoints.

Next: 1. The climate for discourse around the country, on campus and on social media
← Prev Page
You are reading page1Page2Page3Page4Page5Page6Page7Page8Page9
Next Page →

Public Highly Critical of State of Political Discourse in the U.S.
What’s OK – and off-limits – for political debatesLarge shares have negative reactions to what Trump saysRepublicans see a less ‘comfortable’ environment for GOP views
1. The climate for discourse around the country, on campus and on social media 2. The bounds of political debate and criticism 3. Trump’s impact on the tone of political debate, important characteristics for elected officials 4. The public’s level of comfort talking politics and Trump 5. The personal side of speech and expression 6. The challenge of knowing what’s offensive Methodology Appendix: Measures and scales