In the final month before the election, the presidential campaigns are expected to dramatically intensify their voter outreach efforts. Even so, almost half of registered voters (47%) had already received some form of contact from one of the campaigns or groups supporting them as of last month. 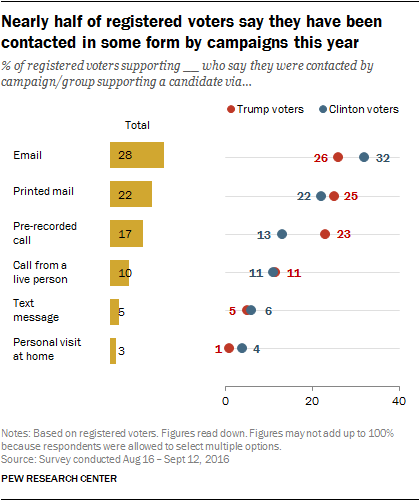 Some forms of outreach are more common than others – with some key differences in the ways Donald Trump and Hillary Clinton supporters have been reached by the campaigns.

An early look at voters’ experience with outreach finds that, as of a few months into the campaign, 28% of voters have received an email from at least one of the campaigns, another 22% have received printed mail in support of a candidate, 17% said they got a pre-recorded phone call or “robocall” and 10% said they received a call from a live person.

This is according to a Pew Research Center survey, conducted August 16- September 12, 2016 among 4,538 adults, including 3,941 registered voters, using the Pew Research Center’s American Trends Panel. The Center will continue to track voters’ experiences with the campaigns’ outreach efforts in the next month. 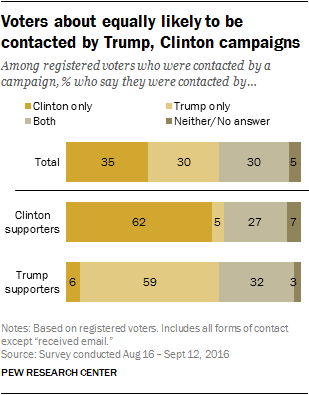 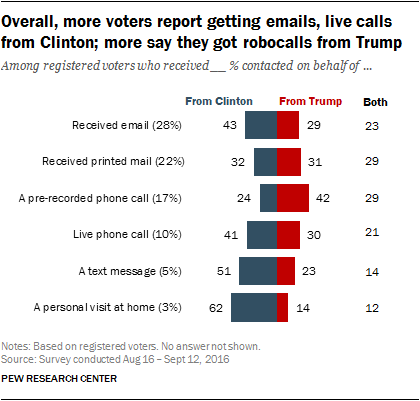 One area where supporters of Trump’s candidacy have been more likely to reach out to voters is through the use of pre-recorded phone calls or robocalls. Fully 42% of people who received pre-recorded phone calls say they solely received these calls on behalf of Trump, 24% have solely received them in support of Clinton. About three-in-ten (29%) voters who have received robocalls say they have heard from both Clinton and Trump supporters.

There are significant demographic differences in voter contact. Older voters, in general, are more likely to say they’ve been reached by the 2016 campaigns. Over half of those 65 and older (56%) have reported receiving at least one form of contact by the campaigns, a stark comparison to the 37% of voters 18-29 who say the same. This pattern repeats itself across many forms of contact, with nearly four-in-ten voters over the age of 65 (38%) and just 8% of voters under 30 receiving a piece of printed mail about the campaign. Similarly, older voters are nearly three times more likely to report receiving a pre-recorded phone call and two times more likely to report receiving a live call. There is little difference across age groups, however, in the percent of voters who report receiving an email. 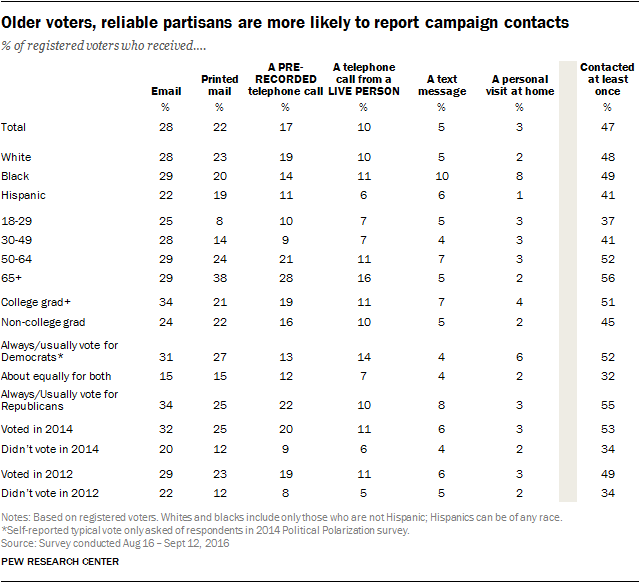 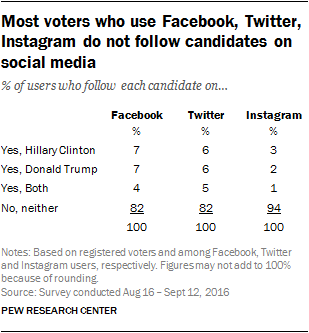 Voters who have voted in previous elections are more likely to say they have been contacted. On the whole, about half of those who voted in the 2012 general election (49%) said they received contact from the campaigns, compared to about a third (34%) of those who didn’t vote in 2012.