Over the past quarter-century, the demographic profile of the U.S. has been changing: The country has become more racially and ethnically diverse, less likely to be affiliated with a religion, better educated and older. National demographic trends coupled with different patterns of party affiliation among demographic groups have fundamentally changed the makeup of the Republican and Democratic parties.

The country’s growing racial and ethnic diversity has changed the composition of both the Republican and Democratic parties, but the impact has been much more pronounced among Democrats and Democratic leaners.

In 1992, 76% of Democratic and Democratic-leaning voters were white, while 17% were black and just 6% were Hispanic. In surveys conducted thus far in 2016, the profile of Democratic voters has grown much more diverse: 57% are white, 21% are black, 12% are Hispanic, 3% are Asian and 5% describe themselves as mixed race or describe their race as “other.”

The population is growing older due to longer life expectancy, the graying of the large Baby Boom generation, and a decline in birth rates since the Baby Boom. In 1992, the median age of all registered voters was 46; today the median age has risen to 50.

In 1992, the Republican Party was made up of somewhat younger voters than the Democratic Party. However, as the country has aged over the past 24 years, there has been a dramatic shift in the composition of the two coalitions, which has resulted in Republican and Republican-leaning voters now being a significantly older cohort than Democratic and Democratic-leaning voters.

Over the past quarter-century, registered voters in the U.S. have become better educated. In 1992, half of voters had no college experience; today that share has fallen to 33%. At the same time, the share of voters with some college experience has risen from 26% to 33% and the share with at least a four-year college degree has grown from 23% to 33%.

In 1992, a 63%-majority of all registered voters were whites without a college degree. Due to growing diversity and rising levels of education, the share of all voters who are non-college whites has fallen dramatically over the last 24 years, to 45% in 2016 surveys. 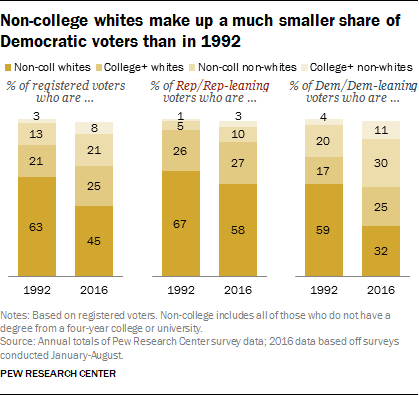 While the share of all voters who are non-college whites has fallen 18 points, the share who are whites with a college degree has edged up from 21% in 1992 to 25% today.

Among Republicans, the decline has been more modest: 58% of all GOP voters today are non-college whites, which is a somewhat smaller majority than in 1992 (67%). As a result of these differential rates of change, the gap between the share of non-college whites in the Republican Party and Democratic Party has increased significantly from eight points in 1992 to 26 points today.

The country’s religious landscape also has been shifting over the past few decades. One of the most fundamental changes has been the increase in the share of voters who do not affiliate with a religion (from 8% in 1996 to 21% in 2016).

The increase in the share of voters who do not identify with a religious group is occurring faster within the Democratic than Republican Party, moving the religious profiles of the two coalitions further apart from one another.

Shifts in the composition of the Republican Party have been more modest and GOP voters are now even more likely than Democratic voters to affiliate with a religion than they were 20 years ago. About a third (35%) of Republican voters are white evangelical Protestants, 18% are white Catholics, 17% are white mainline Protestants and 12% are religiously unaffiliated. The share of GOP voters that is unaffiliated has risen six points since 1996. There has been little change in the share of all GOP voters who are white evangelical Protestants or white Catholics over the past two decades, but the share who are white mainline Protestants has declined 12 points.