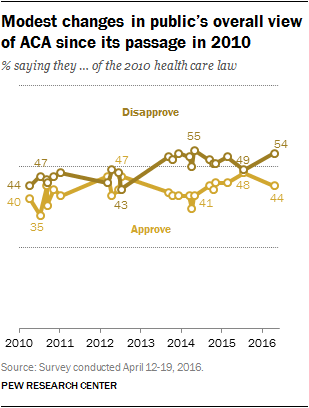 The public’s views of the Affordable Care Act, which were evenly divided following the Supreme Court’s ruling last summer upholding a key section of the law, are again more negative than positive. Currently, 44% approve of the 2010 health care law, compared with 54% who disapprove of the law.

Since that point, positive views of the law’s impact on the country have increased 16 percentage points (from 23% to 39%), while there has been a modest decrease in negative views (49% then, 44% today).

Most of the rise in positive views of the law’s effect on the country has come among Democrats and independents. The share of Democrats who view the law’s impact on the nation positively has risen 24 percentage points (from 42% in December 2013 to 66% today), while the share of independents who say it has had a positive impact has risen from 17% in December 2013 to 36% today. Only one-in-ten Republicans (10%) say the law has had a positive effect on the country, little changed since 2013. 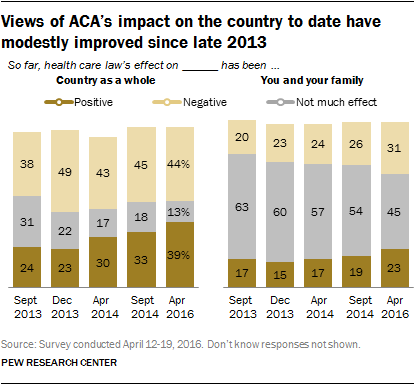 The latest national survey by the Pew Research Center, conducted April 12-19 among 2,008 adults, finds that opinions about the law’s personal impact – and its expected effects going forward – have shown modest changes over time. 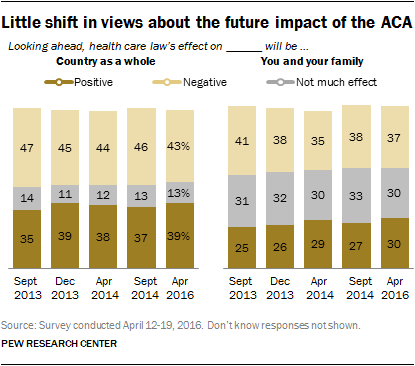 More adults (31%) say the health care law has had a mostly negative effect on themselves and their families than say it has had a mostly positive one (23%), while 45% say it not has had much of an effect. The share saying the law has not has much an effect has declined over the past three years, but the balance of opinion about the law’s personal impact has remained more negative than positive.

By roughly the same margin (37% to 30%), more say that, looking ahead, the health care law will have a mostly negative than a mostly positive personal impact, while 30% say it will not have much of an effect. This is little changed over the last few years.

Partisan views of the ACA

Aside from the partisan divisions over the law, there continue to be wide racial and age differences in opinions about the ACA. Whites disapprove of the law by nearly two-to-one (64% vs. 33%). Conversely, blacks overwhelming support the law (83%), as do a majority of Hispanics (57%).

As in the past, young people view the ACA more positively than do older adults. Among those younger than 30, about as many approve (50%) as disapprove (47%) of the health care law. Among older age groups, more disapprove than approve.

Republicans and Democrats have largely opposing views about the impact of the health care law on the country so far.

The percentage of Democrats who see the law’s impact on the nation as mostly positive has increased 10 points (from 56% to 66%) since September 2014, and is up 25 points from a year before that (in September 2013, just 41% of Democrats said the law had had a positive impact).

Views among Republicans have shifted only modestly since December 2013. In the wake of the troubled rollout of Healthcare.gov as part of the Affordable Care Act, negative views of the law’s impact among Republicans increased from 59% to 74%, and they have remained at similar levels since.

Among independents, about half (48%) say that the law has had a mostly negative effect on the country as a whole, little changed over the last few years. However, the share saying the impact is mostly positive has grown: 36% now say this, up from 28% in September 2014.

As with overall opinions about the ACA, views of its impact – on the country and personally – are divided along racial lines. 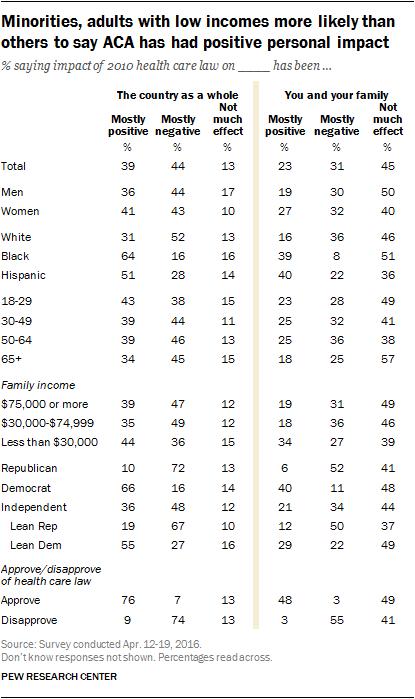 And while about four-in-ten blacks (39%) and Hispanics (40%) say the law’s personal impact has been mostly positive, just 16% of whites say the same.