A year ahead of the presidential election, the American public is deeply cynical about government, politics and the nation’s elected leaders in a way that has become quite familiar.

Currently, just 19% say they can trust the government always or most of the time, among the lowest levels in the past half-century. Only 20% would describe government programs as being well-run. And elected officials are held in such low regard that 55% of the public says “ordinary Americans” would do a better job of solving national problems.

Yet at the same time, most Americans have a lengthy to-do list for this object of their frustration: Majorities want the federal government to have a major role in addressing issues ranging from terrorism and disaster response to education and the environment.

And most Americans like the way the federal government handles many of these same issues, though they are broadly critical of its handling of others – especially poverty and immigration.

A new national survey by Pew Research Center, based on more than 6,000 interviews conducted between August 27 and October 4, 2015, finds that public attitudes about government and politics defy easy categorization. The study builds upon previous reports about the government’s role and performance in 2010 and 1998. This report was made possible by The Pew Charitable Trusts, which received support for the survey from The William and Flora Hewlett Foundation.

The partisan divide over the size and scope of government remains as wide as ever: Support for smaller government endures as a Republican touchstone. Fully 80% of Republicans and Republican-leaning independents say they prefer a smaller government with fewer services, compared with just 31% of Democrats and Democratic leaners.

Yet both Republicans and Democrats favor significant government involvement on an array of specific issues. Among the public overall, majorities say the federal government should have a major role in dealing with 12 of 13 issues included in the survey, all except advancing space exploration.

There is bipartisan agreement that the federal government should play a major role in dealing with terrorism, natural disasters, food and medicine safety, and roads and infrastructure. And while the presidential campaign has exposed sharp partisan divisions over immigration policy, large majorities of both Republicans (85%) and Democrats (80%) say the government should have a major role in managing the immigration system.
But the partisan differences over government’s appropriate role are revealing – with the widest gaps on several issues relating to the social safety net.

Only about a third of Republicans and Republican leaners see a major role for the federal government in helping people get out of poverty (36%) and ensuring access to health care (34%), by far the lowest percentages for any of the 13 issues tested. Fully 72% of Democrats and Democratic leaners say the government should have a major role in helping people out of poverty, and 83% say it should play a major role in ensuring access to health care.

Moreover, while majorities of Republicans favor a major government role in ensuring a basic income for people 65 and older (59%), protecting the environment (58%) and ensuring access to high-quality education (55%), much larger shares of Democrats – 80% or more in each case – favor a large government role.

Throughout most of this report, Republicans and Democrats include independents and other non-partisans who lean toward the parties. In virtually all situations, these Republican and Democratic leaners have far more in common with their partisan counterparts than they do with each other if combined into a single “independent” group. See appendix A for more detail.

Views of what government does well – and what it doesn’t

At a general level, the public finds the government frustrating and badly managed. Just 20% say the federal government runs its programs well, and 59% say it is in need of “very major reform,” up 22 percentage points since 1997.

Roughly half in each party say the federal government does well in maintaining roads, bridges and other infrastructure (52% of Democrats, 50% Republicans) and ensuring access to high-quality education (54% of Republicans, 52% of Democrats).

However, there are substantial partisan differences in views of government performance on a pair of issues that are likely to be important in the 2016 campaign. Republicans are half as likely as Democrats to say the government does a good job in strengthening the economy (34% vs. 68%). And the gap is as large in perceptions of government performance in ensuring access to health care (40% of Republicans vs. 74% of Democrats).

Are Republicans now ‘angrier’ at government?

For years, the public’s general feelings about government have tended more toward frustration than anger.

Currently, 22% say they are “angry” at the federal government; 57% are “frustrated,” and 18% say they are “basically content.” These sentiments have changed little over the past year, but two years ago – during the partial government shutdown – a record 30% expressed anger at government. 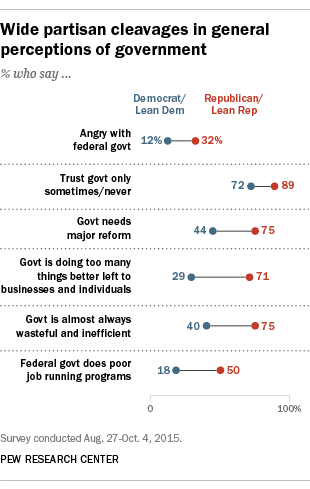 Among both Democrats and Republicans, large majorities say they can seldom, if ever, trust the federal government (89% of Republicans, 72% of Democrats). While trust in government among Republicans has varied widely depending on whether a Republican or Democrat is in the White House, Democrats’ views have shown far less change.

Republicans also are far more likely than Democrats to say that the government is wasteful and inefficient (75% vs. 40% of Democrats) and to give the government a “poor” rating for how it operates its programs (50% vs. 18%).

In politics, most say ‘their side’ is losing

While overall views of the federal government are very negative, there also are several indications of widespread dissatisfaction with the current state of politics. In politics today, far more people say “their side” – however they perceive it – is losing more often than it is winning. 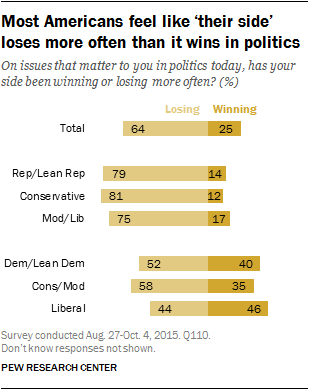 Overall, nearly two-thirds of Americans (64%) say that on the issues that matter to them, their side loses more often than it wins. Just 25% say their side comes out ahead more often.

This sense of “losing” is more widely shared among Republicans than Democrats – large majorities of both conservative Republicans (81%) and moderate and liberal Republicans (75%) say their political side loses more often than it wins.

And, as both parties’ nominating contests continue, 64% of all Americans – including 68% of Democrats and 62% of Republicans – say that the high cost of a presidential campaign “discourages many good candidates from running.” Just 31% overall say that the high cost of presidential campaigns does not discourage good candidates from running. 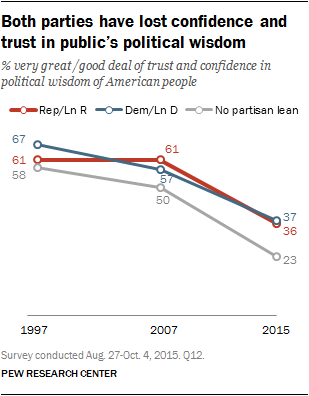 The loss of confidence cuts across the political spectrum: 36% of Republicans have at least a great deal of confidence in the public’s political wisdom; 61% did so in 2007. The decline has been about as large among Democrats (57% then, 37% now). 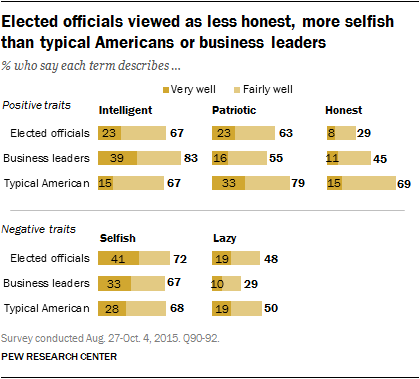 And elected officials receive very low marks for honesty. Just 29% say the term “honest” describes elected officials. That compares with 45% who say business leaders are honest and 69% who say the same about typical Americans.

A large majority of the public (72%) also views elected officials as “selfish” – but that criticism is not unique to politicians. Comparable percentages also say the term applies to typical Americans (68%) and business leaders (67%).

Perhaps the most withering critique of elected officials is the belief – shared by a majority of the public – that “ordinary Americans” could do a better job than they could of solving the nation’s problems. 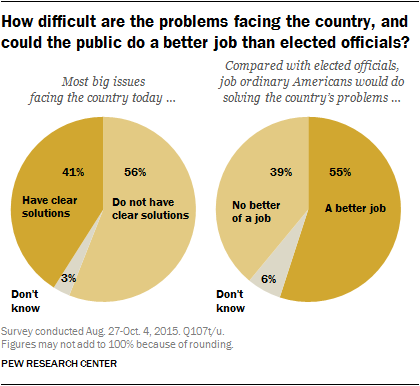 Most Americans (56%) acknowledge that the problems facing the country do not have clear solutions. Even so, most (55%) also say ordinary Americans could do a better job of solving national problems than elected officials.

There are few meaningful partisan differences in views of elected officials. Nearly identical shares of Republicans and Democrats view elected officials as intelligent, honest and selfish. However, Republicans are somewhat more likely than Democrats to say that ordinary people are more capable of solving the nation’s problems (62% vs. 49%). 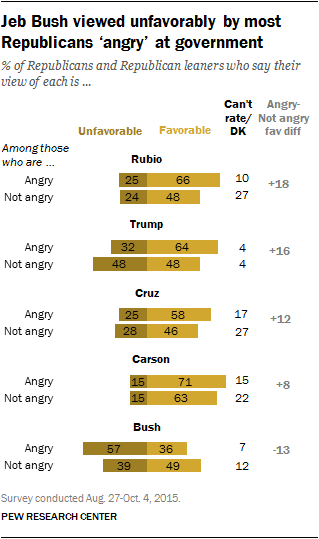 In contrast, Jeb Bush’s favorable rating is 18 percentage points lower among “angry” than “non-angry” Republicans (57% vs 39%). 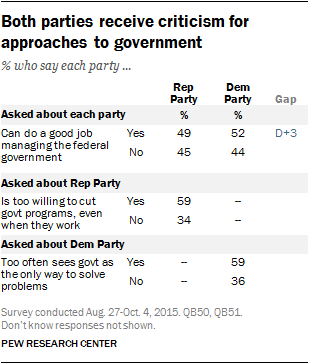 Opinions of the political parties and governance. Similar shares of the public say the Democratic Party (52%) and the Republican Party (49%) could do a good job managing the federal government. Yet both also are criticized for their approaches to governance: 59% say the GOP is too willing to cut government programs, even when they work; an identical percentage (59%) says the Democratic Party too often sees government as the only way to solve problems.

Views of other national institutions. The federal government is not the only national institution viewed negatively by the public. A majority (56%) say large corporations have a negative impact on the country, while an identical percentage says the same about the entertainment industry. And nearly two-thirds (65%) say the national news media has a negative effect on the country.

Opinions about taxes and government. While the public expresses a range of negative assessments of the government, there continues to be limited public outcry over personal tax burdens. Slightly more than half (54%) say they think they pay about the right amount in taxes, considering what they get from the federal government. At the same time, 52% say that most Americans demand more from the government than they are willing to pay for in taxes.