Millennials will soon become the nation’s largest living generation. They already have surpassed Generation X to make up the largest share of the U.S. workforce. 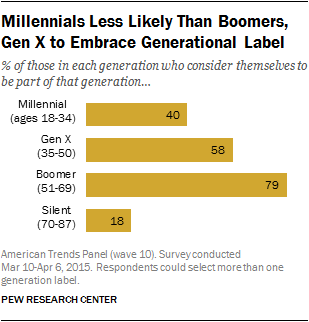 The oldest cohort of Americans is by far the least likely to embrace a generational label. Just 18% of those ages 70 to 87 (the age range of the Silent Generation) actually see themselves as part of the “Silent Generation.” Far more Silents consider themselves part of adjoining generations, either Boomers (34%) or the Greatest Generation (also 34%).

The national survey by the Pew Research Center was conducted March 10-April 6 with 3,147 adults who are part of the American Trends Panel, a nationally representative sample of randomly selected U.S. adults surveyed online and by mail. Respondents were given five commonly used terms for generations, including the “Greatest Generation,” and asked whether they considered themselves part of these generations.

The survey also asked if a number of descriptions applied to the people of their generation. Silents are far more likely than people in younger age cohorts to view their own generation in a positive light. Large majorities of Silents say the people of their generation are hard-working (83%), responsible (78%), patriotic (73%), self-reliant (65%), moral (64%), willing to sacrifice (61%) and compassionate (60%).

Boomers also tend to have favorable impressions of their generation, though in most cases they are not as positive as Silents. By contrast, Gen Xers and Millennials are far more skeptical in assessing the strengths of their generations. And Millennials, in particular, stand out in their willingness to ascribe negative stereotypes to their own generation: 59% say the term “self-absorbed” describes their generation, compared with 30% among Gen Xers, 20% of Boomers and just 7% of Silents.

To be sure, some of these differences may be related more to age and life stage than to the unique characteristics of today’s generations. Responsibilities tend to increase with age. As a result, it is possible that, in any era, older people would be more likely than younger people to view their generation as “responsible.” In addition, differences between old and young in such realms as patriotism, religiosity and political activism have been evident for many years. (See this explainer report for more on our approach to studying generations.)

On several measures – including hard work, responsibility, willingness to sacrifice, and self-reliance – the share in each generation expressing positive views declines step-wise across age cohorts, from the oldest to the youngest.

The survey includes 18 descriptions – a mix of positive, negative and neutral terms. On some terms, such as environmentally-conscious, entrepreneurial and rigid, there are no significant differences across cohorts in the shares saying each applies.

There is only one description – “idealistic” – on which a generation other than the Silents views itself most positively: Somewhat more Millennials (39%) than Gen Xers (28%), Boomers (31%) or Silents (26%) describe their generation as idealistic.

Generational names are largely the creations of social scientists and market researchers. The age boundaries of these widely used labels are somewhat variable and subjective, so perhaps it is not surprising that many Americans do not identify with “their” generation. 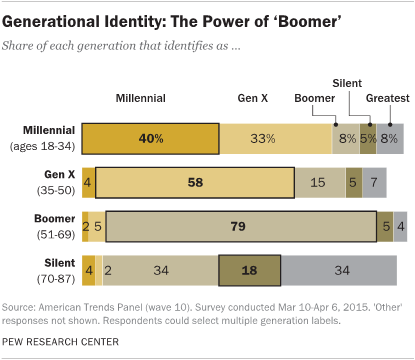 Yet the Boomer label resonates strongly with the members of this generation; the name arose from the fertility spike that began shortly after World War II and continued through the early 1960s. Fully 79% of those born between 1946 and 1964, the widely used age range of this generation, identify as Boomers. That is by far the strongest identification with a generational name of any cohort.

Just 18% of those in the Silent Generation (born 1928 to 1945) consider themselves part of this generation. In part, this reflects the low visibility of the term “Silent Generation,” though it has been in use for more than half a century. In coining the name in 1951, Time magazine described the Silents as “working fairly hard and saying almost nothing.” 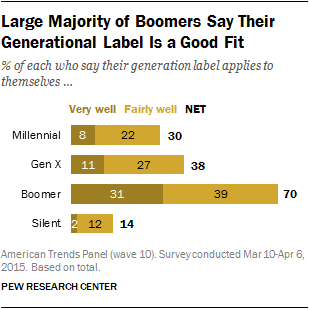 Aside from being asked about their generational identity, respondents also were asked how well each generational term applies. In this case, the differences between Boomers and the other three generations are even starker. Seven-in-ten Boomers (70%) say the term “Baby-Boom generation” applies to them very well (31%) or fairly well (39%). Among other generations, no more than about four-in-ten (38% of Gen X) say their generational label is a good fit.

As with many positive generational descriptions, there also are wide differences over whether negative terms apply. Millennials are far more likely than older generations to say the terms “self-absorbed,” “wasteful,” and “greedy” apply to people in their age cohort.

And while Silents are more likely than other generations to say that several positive terms describe their generation, they also are less likely to say some negative terms apply. Only about one-in-ten Silents see the people of their generation as self-absorbed (7%), wasteful (10%) and greedy (8%) – by far the lowest shares of any cohort.

There are smaller differences among generations over whether the term “cynical” describes people in their age cohort: 31% of Millennials say it applies, compared with 24% of Gen X, 16% of Boomers and just 7% of Silents. Relatively few across all generations – only about one-in-ten – say the term “rigid” applies.

Millennials are more likely to characterize their generation as “idealistic,” but the differences are not large. About four-in-ten Millennials (39%) say the term idealistic applies to people in their cohort, compared with 28% of Gen Xers, 31% of Boomers and 26% of Silents.

On three other descriptions – “environmentally conscious,” “entrepreneurial,” and “tolerant” – there are no significant differences across generations.

To be sure, young adults are more likely than older people to say there is strong evidence of climate change and to prioritize the development of alternative energy over expanding the production of fossil fuels. Yet Millennials (40%) and Gen Xers (37%) are no more likely than Boomers (41%) or Silents (40%) to describe the people in their generation as environmentally conscious.

And while Millennials are more accepting of homosexuality, interracial marriage and hold more positive views of immigrants, about the same share of Millennials (33%) as those in older age cohorts consider the people in their generation tolerant.