The public makes sharp distinctions about which groups have benefited – and which have not – from the economic policies the government has put in place since the start of the recession. Majorities say that large banks, large corporations and the wealthy have been helped a great deal or a fair amount by government policies.

By contrast, 72% say that, in general, the government’s policies since the recession have done little or nothing to help middle class people, and nearly as many say they have provided little or no help for small businesses (68%) and the poor (65%). 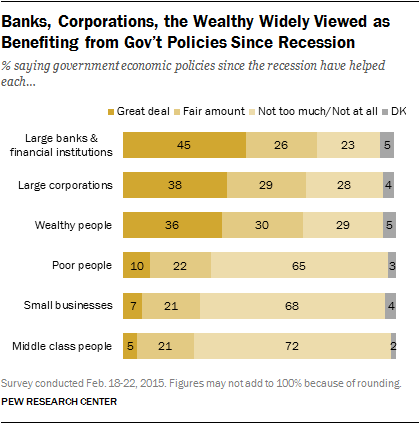 These opinions have changed little in recent years, and differ only modestly across demographic and income categories. There are significant partisan differences in these views, though majorities of Democrats, Republicans and independents say that government policies following the start of the recession have done little or nothing for the poor and the middle class.

The latest national survey by the Pew Research Center, conducted Feb. 18-22 among 1,504 adults, finds that opinions about whether various aspects of the economy – jobs, household incomes and the stock market – have recovered from the recession are much more positive than they were two years ago. 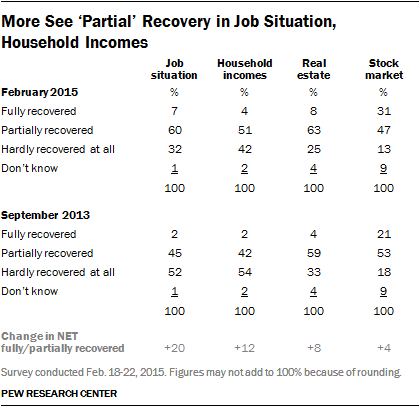 There has been less change since 2013 in views about recovery in the stock market and real estate. In 2013, majorities said both sectors had either fully or partially recovered, and that remains the case today. But there has been a 10-point increase since then in the share saying the stock market has “fully” recovered from the recession (31% now, 21% then). 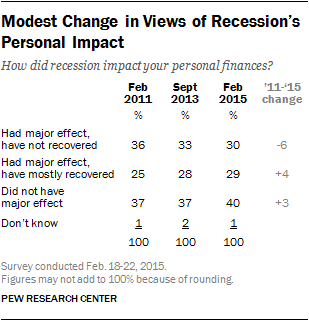 The share saying their finances have not recovered from the recession has declined slightly, from 36% in 2011 and 33% in 2013 to 30% currently. Those with lower family incomes are especially likely to say they are still recovering from the recession, six years after it ended. 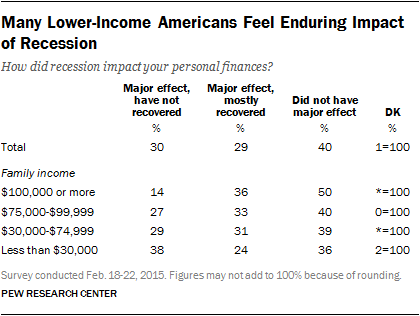 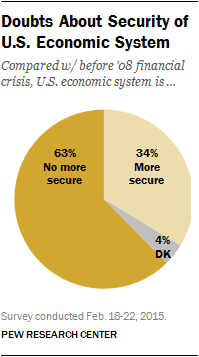 Economic System Still Seen at Risk. Most Americans continue to think the U.S. economic system is still vulnerable to the type of crisis that devastated the economy in the fall of 2008. Currently, 63% say the economic system is no more secure today than it was before the 2008 financial crisis, while only about a third of Americans (34%) say it is more secure. These attitudes are virtually unchanged from two years ago.

Views of National Economy Weaken a Bit. About a quarter (26%) view economic conditions as excellent or good, about the same as in January (27%). But “poor” ratings of the economy, which fell nine points from October to January, have increased seven points since last month.

Most Say Economic System Favors Powerful Interests. Currently, 62% say the economic system in this country unfairly favors powerful interests, while only about half as many (33%) think the system is fair to most Americans. This opinion is little changed since last year. The view that the economic system is tilted toward the powerful is shared by those in all income categories.

Impact of Government Policies Since the Recession 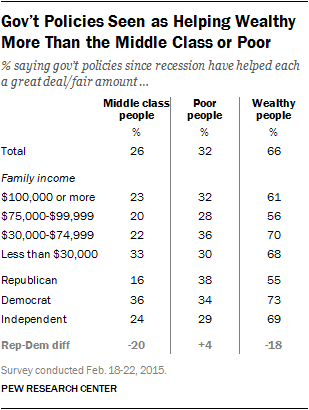 Majorities across virtually all demographic and partisan groups say wealthy people have been helped a great deal or a fair amount by government policies since the recession began. Substantially smaller shares say middle class people and poor people have benefitted at least a fair amount.

Still, there are partisan differences in these opinions: Republicans (55%) are less likely than Democrats (73%) to say the wealthy have benefitted at least a fair amount from government policies since the start of the recession. Republicans also are less likely to say that the middle class has been helped: Just 16% say the middle class have been helped at least a fair amount, compared with 36% of Democrats. Comparable shares of Republicans (38%) and Democrats (34%) say poor people have been helped a great deal or fair amount by government policies.

Majorities of those in all income groups say that government policies implemented since the start of the recession have helped the wealthy. At the same time, relatively small percentages across income levels say government policies have done at least a fair amount for either the poor or middle class. 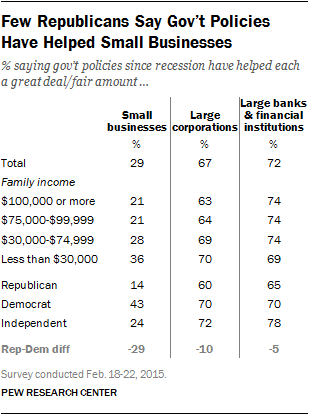 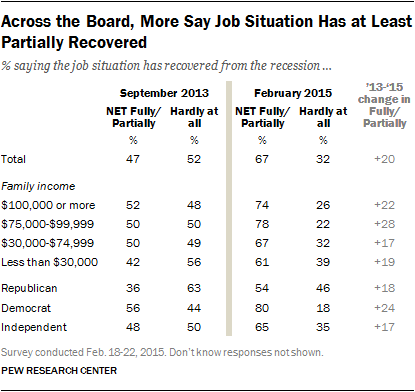 Since September 2013, there has been an across-the-board rise in the view that the job situation has at least partially recovered from the recession. However, most say that jobs have partially (60%), rather than fully (7%), recovered.

Republicans, Democrats and independents, and those across income levels, are all much more likely to see a stronger recovery in the job situation than in September 2013. Still, far more Democrats (80%) than Republicans (54%) see a recovery in jobs. 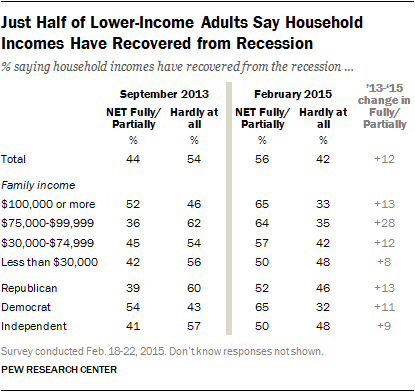 A similar pattern is evident in whether household incomes have recovered since the start of the recession. And there continues to be a sizable gap in these perceptions both by family income and partisanship.

Nearly two-thirds of Democrats (65%) say household incomes have seen some recovery from the recession, compared with only about half of Republicans (52%) and independents (50%).

Current Views of the Nation’s Economy

Overall, 26% describe economic conditions in the country as excellent or good, while slightly more (31%) say they are poor; a 43% plurality say conditions are only fair. Positive views of the economy are about the same as in January (27%). But somewhat more describe the economy as poor than did so last month (31% now, 24% then) while the share saying it is only fair has ticked down (from 48% to 43%).

Nonetheless, views of the economy remain much more positive than they were in January 2014, when just 16% rated the economy as excellent or good.

On Core Economic Beliefs, Differences Between – and Within – Parties 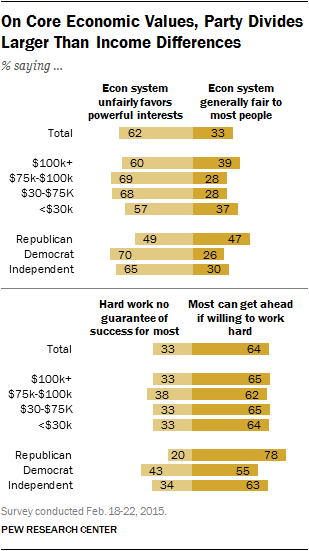 Most Americans (62%) think “the economic system in this country unfairly favors powerful interests.” Only about half as many (33%) say the system is “generally fair to most Americans.”

Seven-in-ten Democrats (70%) and 65% of independents regard the economic system as unfair. Republicans are divided: 49% say the system unfairly favors powerful interests, while 47% say it is fair to most Americans. Majorities across income categories view the system as unfair.

Most Americans say it is still possible to get ahead, despite the perceived unfairness of the economic system. Nearly two-thirds (64%) say “most people who want to get ahead can make it if they’re willing to work hard.” A third (33%) says that “hard work and determination are no guarantee of success for most people.”

As with opinions about the fairness of the economic system, views about whether hard work can lead to success differ more along partisan than income lines. Overall, 55% of Democrats say most people can get ahead through hard work compared with larger majorities of independents (63%) and Republicans (78%). Across income levels, similarly large majorities say most people who want to get ahead can make it if they’re willing to work hard. 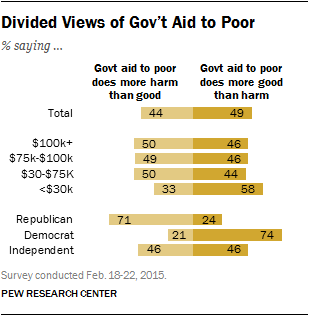 A majority of those with family incomes of less than $30,000 a year (58%) say government aid to the poor does more good than harm. People in higher income groups are more divided.

Views on these three questions are largely unchanged from last June. As the Pew Research Center’s Political Typology report noted, there are deep divisions between, as well as within, the broader party coalitions on several of these measures.

Within both parties, there are notable divisions by income level in core economic beliefs. Among Democrats, those with family incomes of $75,000 or more are more likely than those with low incomes (less than $30,000) to say the economic system is unfair, that hard work is no guarantee of success and that government aid to the poor does more good than harm. 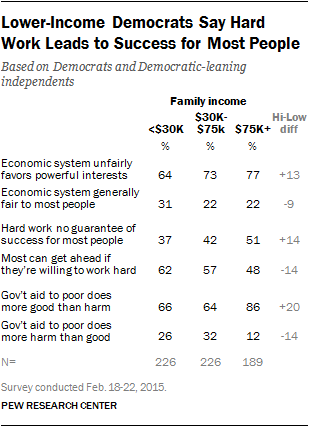 Ideology is a factor in these opinions. For example, 57% of liberal Democrats say hard work is no guarantee of success for most people. By contrast, among conservative and moderate Democrats, 64% say most people who work hard can get ahead. Democrats with higher incomes are more likely to describe their political views as liberal than are those with middle or lower incomes. 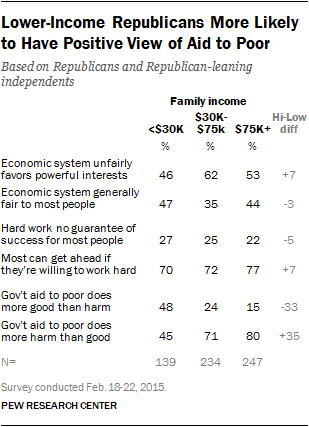 Majorities of Republicans across income groups say most people can get ahead with hard work. Republicans with incomes of $30,000-$74,999 are somewhat more likely than those with higher or lower incomes to say that the economic system is unfair. 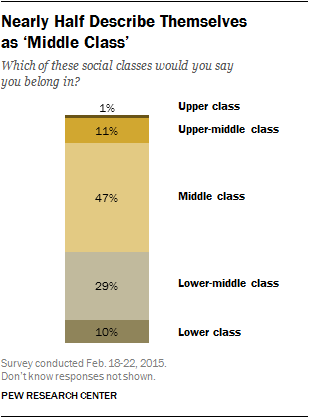 Amid debate over which policies would do the most to improve the lives of the middle class, large percentages of Americans identify with the term – either completely or with some qualification.

Just 1% say they belong in the upper class. Somewhat more (10%) place themselves at the bottom of the scale and say they are lower class.

Views on this question have changed little over the past year. In January 2014, 44% described themselves as middle class, 28% as lower-middle class and 13% as upper-middle class. 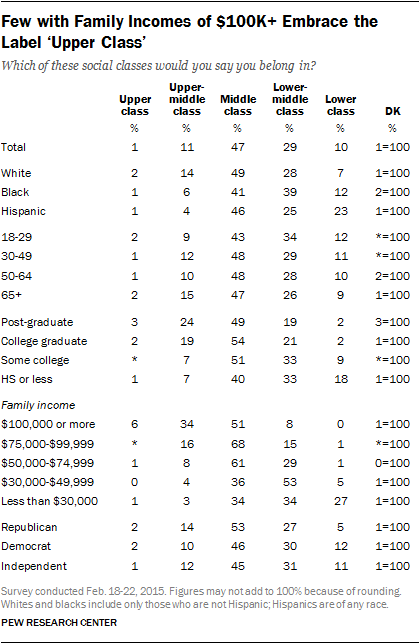 Those with family incomes of $100,000 a year or more are among the most likely to place themselves at the top of the social class ladder: 40% say they are either upper-middle or upper class. However, 51% say they belong in the middle class and 8% say they are lower-middle class.

There also are racial and ethnic differences in how people describe their social class; about half of blacks (51%) and Hispanics (48%) say they are either lower-middle class or lower class, compared with 35% of whites.

Five Years after Market Crash, U.S. Economy Seen as ‘No More Secure’
Gov’t Economic Policies Seen as Boon for Banks and Big Business, Not Middle Class or Poor
Majorities Say Government Does Too Little for Older People, the Poor and the Middle Class
Public and Occupy Wall Street Movement Agree on Key Issues
Public Not Desperate About Economy or Personal Finances