Amid accelerating economic growth and falling unemployment, public views of the U.S. economy have improved. Overall, 27% describe economic conditions as either excellent (4%) or good (23%), while 48% say they are only fair, and 24% call them poor. The percent rating economic conditions as poor has declined nine points since October (from 33%). This marks the first time in Obama’s presidency that about as many have described the economy as excellent or good (27%) as poor (24%).

Going forward, expectations for the economy have also improved somewhat. More say they expect the economy will be better in a year (31%) than worse (17%); 51% expect conditions to be about the same as they are now. In October, 27% expected the economy to improve over the next year compared with 21% who thought it would get worse. 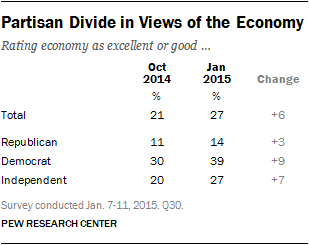 And while Democrats (+9 points) and independents (+7 points) have become more likely to rate the economy as excellent or good since October, there has been no significant shift in views among Republicans (+3 points). 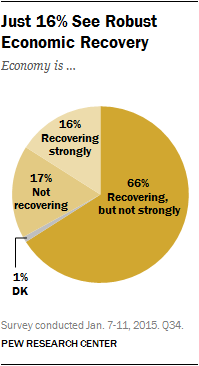 Views of Jobs Improving, but Most Still Say ‘Difficult to Find’ 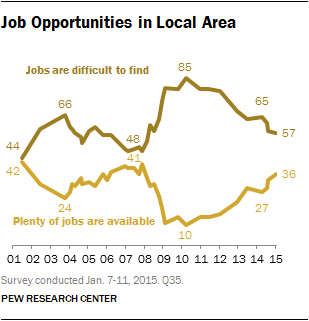 When it comes to job opportunities, 57% say that jobs are difficult to find in their community, while 36% say that there are plenty of jobs available. Views of job availability have edged higher over the past several years as the unemployment rate has declined. The percentage saying that there are plenty of jobs available in their community has not been higher since November 2007, before the start of the Great Recession. 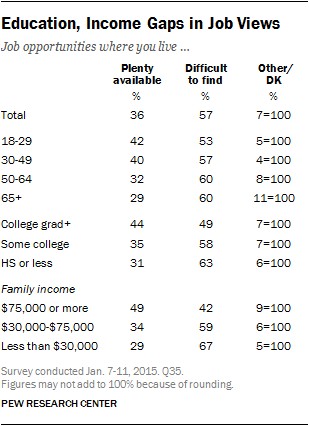 Views of job availability differ significantly across demographic groups. People under 50 (41%) are more likely to say that jobs are available in their area than are those 50 and older (31%).

The partisan divide in views of job availability is relatively modest: 40% of Democrats say that there are plenty of job opportunities, compared with slightly fewer Republicans (32%). Among independents, 35% say jobs are available in their community.

Most Still Say ‘Falling Behind’ Cost of Living

While the sense of falling behind is widely held, there are differences in this view across demographic groups. Among those with family incomes of less than $30,000, more than twice as many (65%) say their incomes are failing to keep pace with living costs. Yet even among those at the top of the income scale, relatively few say their income is increasing faster than the cost of living. Just 19% of those earning $100,000 a year or more say their income is going up faster than the cost of living; 48% say it’s staying about even, and 31% say it is falling behind.

And adults under age 30 are about as likely to say their income is staying about even (44%) as falling behind (47%) the cost of living. Among older adults, larger percentages say they are falling behind than staying even.

When it comes to political leaders in Washington and the economy, more express confidence in Obama to do the right thing than in Democratic or Republican congressional leaders. 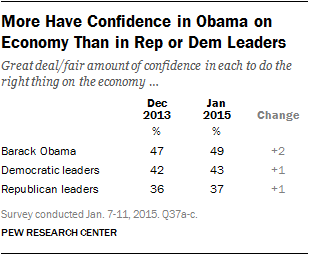 About half of the public (49%) expresses either a great deal or a fair amount of confidence in Obama to do the right thing on the economy, while about as many (50%) say they have not too much or no confidence at all in Obama on this issue.

By comparison, just 37% say they have a great deal or a fair amount of confidence in Republican leaders in Congress; about six-in-ten (61%) say they have not too much or no confidence at all in GOP leaders.

Democratic congressional leaders are viewed slightly better than their Republican counterparts: 43% express confidence in their ability to do the right thing on the economy, while 55% have little or no confidence.

Confidence in Obama and Congressional leaders on the economy is little changed from views in December 2013 prior to the Republican Party winning control of the Senate in the 2014 midterm elections. 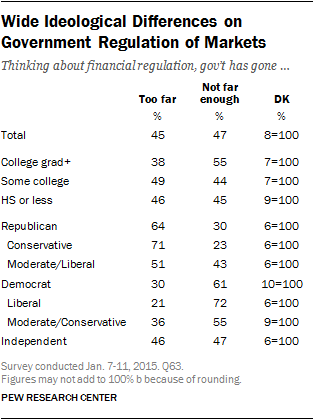 There are stark differences in views on this question across political and ideological lines. Fully 64% of Republicans – and 71% of conservative Republicans – say the government has gone too far regulating financial institutions and markets, making it harder for the economy to grow.

By contrast, 61% of Democrats – and 72% of liberal Democrats – say the government has not gone far enough in regulating financial institutions and markets, leaving the country at risk of another financial crisis.

Independents are evenly split on this question: 47% say government has not gone far enough regulating financial institutions and markets, while 46% say it has gone too far. 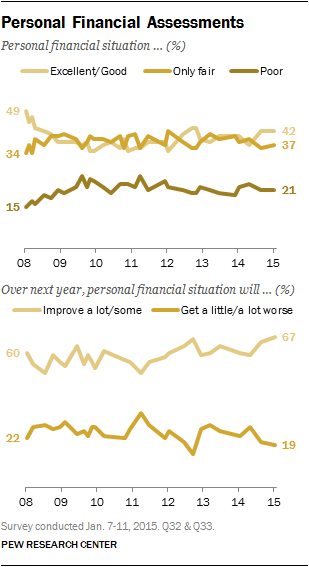 Ratings of people’s personal financial situation tend to be much more stable than assessments of the national economic picture.

In the current survey, 42% say they are in excellent or good shape financially, while 37% say they are in only fair shape, and 21% say they are in poor shape. These ratings are unchanged from last August and are similar to assessments of personal finances over the past several years.

Next: Section 3: The Parties and Congress in 2015
← Prev Page
Page1Page2You are reading page3Page4Page5
Next Page →