With the new Republican-led Congress in session, overall views of both parties have shifted in a more favorable direction over the last month, but the public sees few prospects for partisan cooperation on the horizon and a record-high gulf between what the Republican and Democratic parties stand for. Against this backdrop, Americans are divided in their views of GOP policies and plans and their likelihood of legislative success.

GOP Plans and Policies for Future 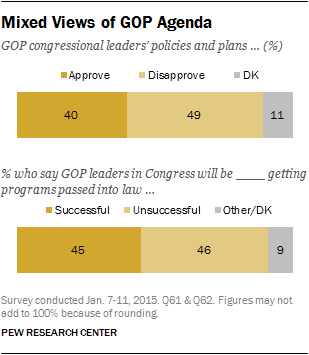 Expectations for Republican legislative achievement in the new Congress are limited. About as many say they think Republican leaders will be unsuccessful (46%) as successful (45%) in getting their programs passed into law. These views also have become slightly more negative since early November; at that time, 49% thought GOP leaders would be successful passing their programs into law, while 40% thought they would be unsuccessful. 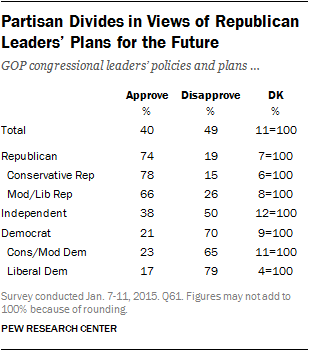 By contrast, seven-in-ten Democrats (70%), including 79% of liberal Democrats, disapprove of Republican congressional leaders’ policies and plans for the future. 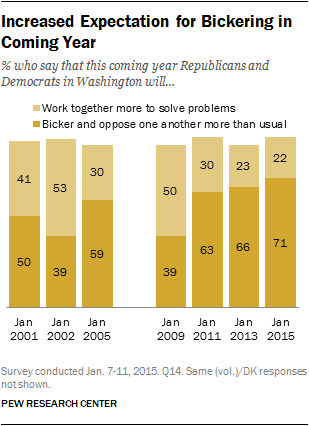 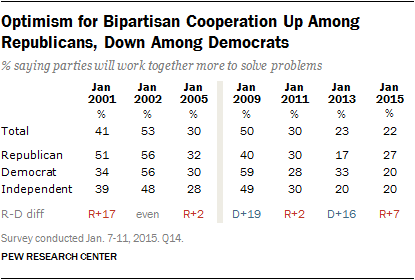 The public has had low expectations for cooperation in Washington at the outset of the last several congressional terms. However, expectations today are even more pessimistic than in January 2013 (when 66% said bickering and opposition would be greater than usual) and January 2011 (when 61% said this). That contrasts with public views on the eve of Obama’s first inauguration when Americans were far more optimistic: In January 2009, just 39% expected more bickering and opposition, while 50% thought the parties would work together more.

Optimism is in short supply across the board, but Republicans, having regained control of both chambers of Congress, are now somewhat more likely (27%) than Democrats or independents (both 20%) to say they expect the parties to work together more than in the past.

By comparison, in January 2013 following Obama’s re-election, Democrats were more optimistic than Republicans (33% vs. 17%).

While the Democratic Party continues to be viewed somewhat more favorably than the Republican Party, both parties have seen an uptick in their favorability since last month. Currently 46% rate the Democratic Party favorably (a rebound from last month when just 41% viewed it favorably, but on par with views throughout 2014) and 41% have a favorable opinion of the GOP (up four points since December). 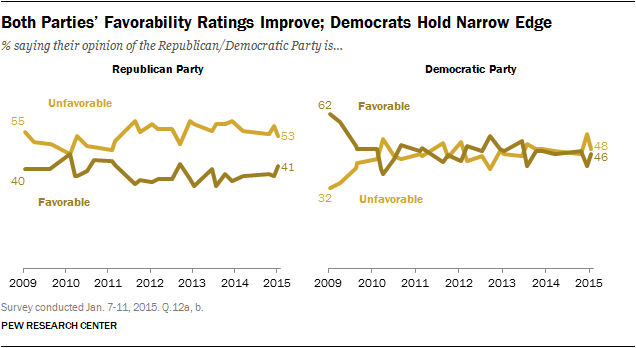 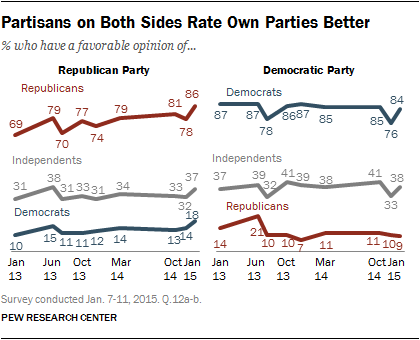 Fully 86% of Republicans rate the GOP favorably, an eight-point improvement from December. The GOP’s rating among Republicans hasn’t been higher since before the 2012 election.

And 84% of Democrats view their party favorably. This is eight points better than last month and similar to their views of the party before the midterm elections. 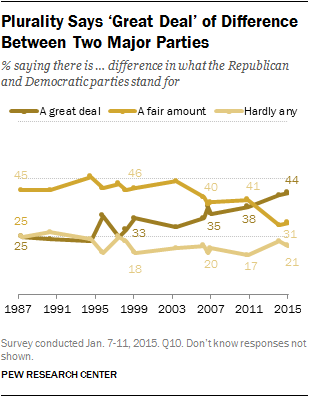 Increasingly, the public thinks there are large differences between the Republican and the Democratic parties. Fully 44% now say there is ‘a great deal’ of difference between the parties. Though these views are little changed since last February, the proportion saying this has increased six points since 2010, and is at its highest point since the Pew Research Center first asked this question in 1987. 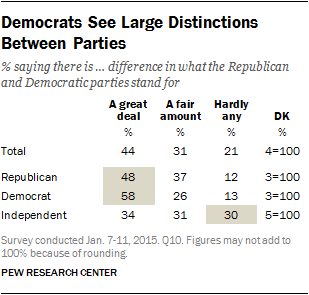 Republicans Critical of Their Party

Fully 72% of Republicans and Republican-leaning independents say the GOP is doing only a fair or poor job ‘standing up for its traditional positions on such things as reducing the size of government, cutting taxes and promoting conservative social values.’ Just 27% say the party is doing an excellent or good job in advocating for these traditional positions.

The proportion of Republicans and GOP leaners giving the party positive ratings is little changed over the past few years.

Democrats remain less likely than Republicans to criticize their party’s performance in standing up for its traditional positions (55% vs. 72%). Still, more Democrats and Democratic-leaning independents say their party is doing an only fair or poor job (55%) than think their party is doing an excellent or good job (44%) of standing up for its traditional positions, such as ‘protecting the interests of minorities, helping the poor and needy and representing working people.’