Throughout this report we utilize a scale composed of 10 indicators measured on the Pew Research Center American Trends Panel to gauge financial status. Three dimensions of financial circumstances were used to create the scale – financial assets, financial troubles and government means-tested programs. 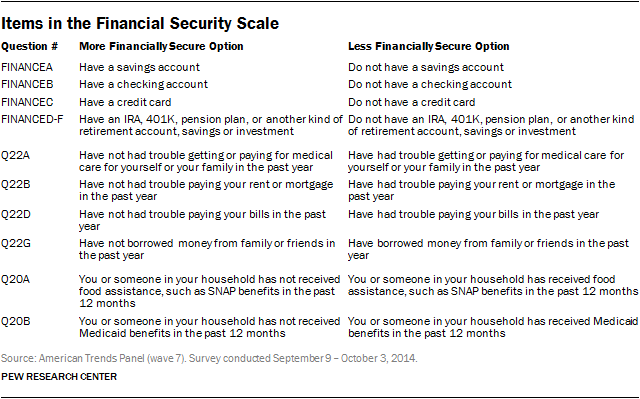 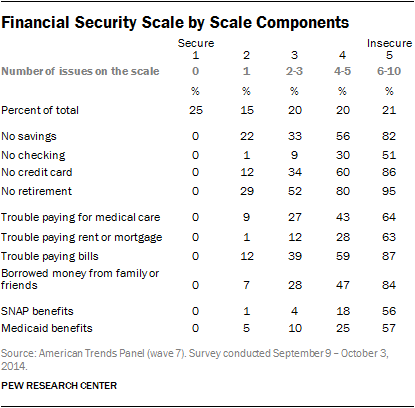 The most secure group (25% of the general public) were those who reported no financial troubles (no difficulty paying for medical care, housing, general bills or having had to borrow money from family or friends), said they had received no government food assistance or Medicaid benefits and reported that they had key financial instruments (checking, savings and a credit card), plus a retirement account of some sort beyond Social Security.

The scale is strongly associated with family income, but was chosen for this analysis because it reflects the actual levels of financial comfort or discomfort, rather than a summary measure of income that may obscure the situations facing particular individuals. For example, 73% of the most financially insecure (5’s on the scale) are making less than $30,000 annually; however, 7% are making more than $50,000. On the opposite end of the spectrum, only 34% of the most financially secure individuals (according to the scale) make more than $100,000 annually, while 23% of the financially secure are making less than $50,000.

Next: Appendix B: About the Survey
← Prev Page
Page1You are reading page2Page3Page4
Next Page →

Political Typology Reveals Deep Fissures on the Right and Left
Political Polarization in Action: Insights into the 2014 Election from the American Trends Panel
Beyond Red vs. Blue: The Political Typology
Retro-Politics
The 2004 Political Landscape