The federal government’s annual survey on drug use in the United States finds that the use of illicit drugs has increased over the past decade, in part because of a rise in marijuana use. The government treats marijuana as an illicit drug; marijuana is now legal for medicinal use in 18 states and for recreational use in two others (Colorado and Washington). 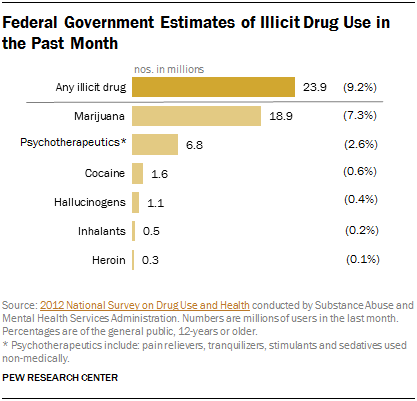 According to the 2012 drug use survey by the Substance Abuse and Mental Health Services Administration, approximately 24 million Americans (9.2% of the general public aged 12 or older) reported using an illicit drug in the past month. This is up from 8.3% 10 years earlier.

The number of Americans who had used marijuana in the last month increased from 14.5 million in 2007 (5.8%) to 18.9 million in 2012 (7.3%). Among the so-called “hard drugs,” heroin use more than doubled from 166,000 to 335,000 individuals per month between 2002 and 2012. Cocaine use declined slightly over this same period. In 2012, 6.8 million Americans used prescription-type medications that have legitimate medical uses, such as pain relievers including Oxycontin and Vicodin, but for non-medical purposes (referred to as psychotherapeutic drugs). These figures are statistically equivalent to usage levels going back to 2002 (2.7%). 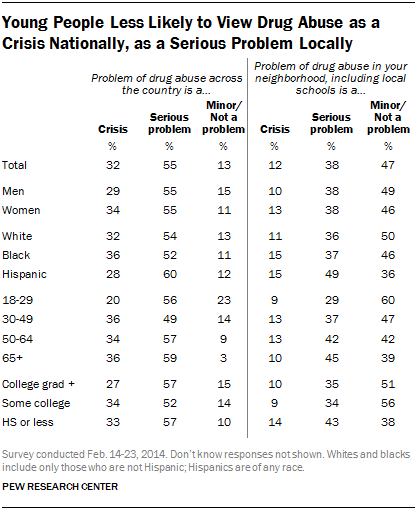 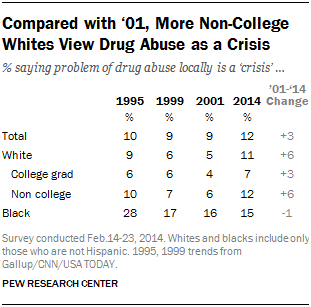 Two decades ago, blacks were far more likely than whites to say that the problem of drug abuse was a crisis in their neighborhoods and schools; in 1995, 28% of blacks and just 9% of whites saw drug abuse as a crisis locally.

The share of blacks saying drug abuse in their communities is a crisis declined later in the 1990s. By 2001, 16% of blacks regarded the problem of local drug abuse as a crisis; that is little different from the current measure (15%).

Compared with 2001, a greater share of whites – particularly less educated whites – say the problem of drug abuse in their communities is a crisis. Currently, 12% of non-college whites say drug abuse is a crisis in their neighborhood, double the percentage that said this 13 years ago.

More than six-in-ten (63%) say that state governments moving away from mandatory prison terms for non-violent drug crimes is a good thing, while just 32% say these policy changes are a bad thing. This is a substantial shift from 2001 when the public was evenly divided (47% good thing vs. 45% bad thing).

Across nearly all demographic groups majorities say that the move away from mandatory prison terms is a good thing, and in most cases these percentages have increased by double digits since 2001. Majorities of both men (64%) and women (62%) view these policy changes as a good thing – up 13 points among men and 20 points among women. In 2001, women were less supportive than men of sentencing revisions. Half of women said it was a bad thing compared with 40% of men. 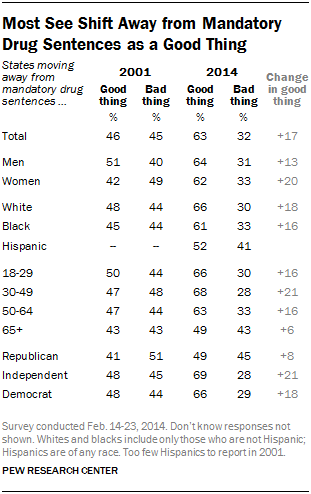 As is the case with opinions on other issues related to illegal drug use, older Americans and Republicans are most likely to have reservations about state governments moving away from mandatory drug sentences.

About half of those 65 and older (49%) say that the move away from mandatory drug sentences is a good thing, up only modestly from 2001 (43%). By contrast, majorities among younger age groups have a positive view of the elimination of mandatory drug sentences, and this view has increased by double digits among those under 65 since 2001. 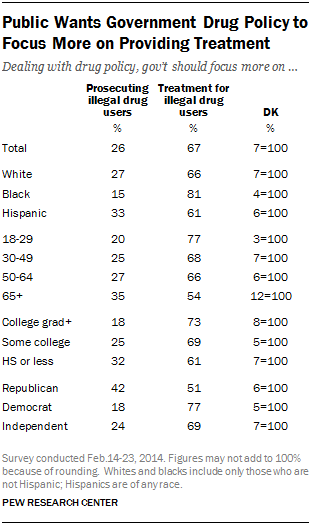 Half or more in virtually every demographic and partisan group says the priority should be treatment, not prosecution. But there are differences across racial and ethnic lines: 81% of blacks say the government should focus more on treatment for drug users, compared with 66% of whites and 61% of Hispanics.

In addition, while large majorities of Democrats (77%) and independents (69%) want the government’s focus more on treatment, a smaller share of Republicans (51%) favor this approach. Those 65 and older are less likely than those in younger age groups to say that the government should focus on providing treatment for drug users rather than prosecuting them.

Those who view drug abuse across the country as a crisis are about as likely as those who do not to favor treatment rather than prosecution for those using illegal drugs like heroin and cocaine. Among those who say drug abuse is a crisis in their neighborhood, 64% favor the treatment option, about the same percentage as those who view the problem less seriously (68%).

Feds may be rethinking the drug war, but states have been leading the way
Millennials in Adulthood
Interdiction and Incarceration Still Top Remedies
In Debate Over Legalizing Marijuana, Disagreement Over Drug’s Dangers
Majority Now Supports Legalizing Marijuana