Nearly a week into the first government shutdown in more than 17 years, most Americans express frustration and concern about the situation. Yet on the core issue dividing Republicans and Democrats in Washington – whether cuts or delays to the 2010 health care law should be part of any budget deal – there is little support for compromise among members of either party. 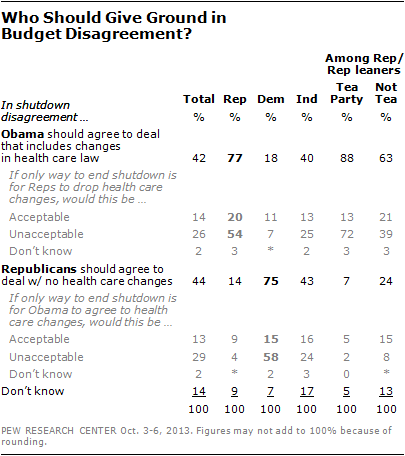 Even when asked if the only way to end the shutdown soon is for their side to give ground on the health care issue, most are unwilling to back down. A majority of Democrats (58%) say it would be unacceptable for Obama to agree to cuts or delays in the Affordable Care Act, even if this is the only way to resolve the shutdown soon. Roughly the same share of Republicans (54%) say it would be unacceptable for GOP leaders to agree to any deal that does not include cuts or delays to Obamacare.

As other recent polls have shown, there is broad public support for a compromise on the government shutdown when explicit tradeoffs and concessions are not mentioned. Fully 61% say lawmakers who share their views about the government shutdown should be willing to make compromises, even if it results in a deal they disagree with; just 29% say lawmakers who share their views should stand by their principles, even if that means the shutdown lasts longer. Yet finding the middle ground on the issue of cuts or delays to the health care law is clearly more difficult. 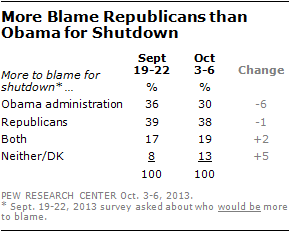 Polling in the early days of the 1995 government shutdown was much more lopsided: For example, a Nov. 1995 Gallup/CNN/USA TODAY survey found more blaming Republicans in Congress than Bill Clinton by a 22-point margin (47% vs. 25%). 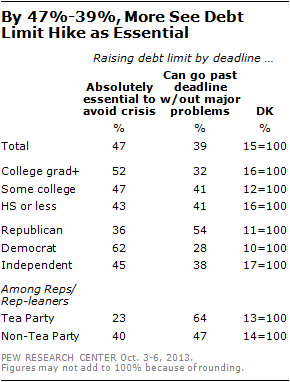 With the nation rapidly approaching its borrowing limit – possibly as soon as Oct. 17, according to Treasury Secretary Jacob Lew – 47% say it is “absolutely essential that the federal debt limit be raised to avoid an economic crisis.” Yet roughly four-in-ten (39%) are skeptical saying “the country can go past the deadline for raising the debt limit without major economic problems.”

Opinion about raising the debt limit was more evenly divided in July 2011, a few weeks before the last major showdown over the issue. At that time, 40% viewed a debt limit increase as absolutely essential in order to avoid a crisis, while nearly as many (39%) said it would not pose major problems.

Views of Impact of Government Shutdown 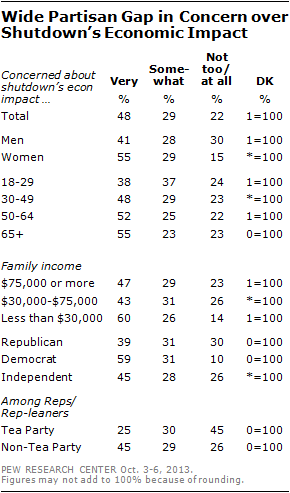 Majorities of Democrats, people with lower family incomes (less than $30,000), women and older Americans (65 and older) say they are very concerned about the economic effects of the shutdown. Far fewer Republicans, people with higher incomes, men and young people (under 30) express a great deal of concern. 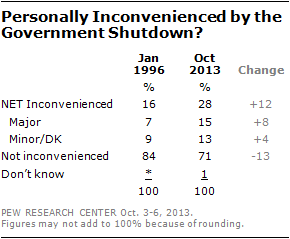 While there are sizable partisan and demographic gaps in concern over the economic effects of the shutdown, there are smaller differences in the percentages saying they have been personally inconvenienced by the federal government shutdown. Overall, 28% say they or a member of their family have been inconvenienced, which is far higher than the percentage saying this during the last shutdown of the federal government, in January 1996 (16%). 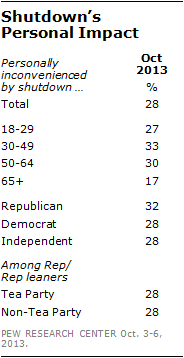 One-in-Ten Have Contacted Officials or Signed a Petition

About one-in-ten Americans (13%) say they have contacted a public official or signed a petition to express their opinion about the shutdown, while 87% say they have not.

Similarly, those who say they or a family member have been personally inconvenienced by the shutdown are more likely than those who have not been inconvenienced to say they have contacted a public official or signed a petition (19% vs. 11%). 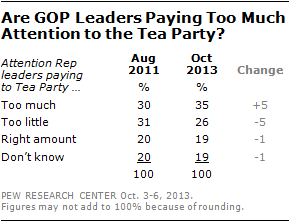 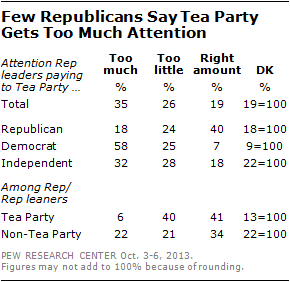 Partisans Dug in on Budget, Health Care Impasse
Survey ReportFour-in-Ten Say Nation Can Go Past Debt Limit DeadlineViews of Impact of Government ShutdownOne-in-Ten Have Contacted Officials or Signed a PetitionFew Republicans Say GOP Leaders Give Tea Party Too Much Attention
About the Survey