If the federal government shuts down because Republicans and the Obama administration fail to agree on a budget, there will be plenty of blame to go around. 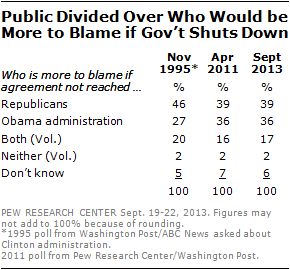 This parallels the divided sentiment on the eve of the budget standoff in the spring of 2011, which was ultimately averted. But opinions are notably different today than they were during the budget battle of 1995. A November 1995 Washington Post/ABC News survey asked a similar question and found that 46% said a shutdown would mainly be the fault of the Republican Congress; just 27% said the bulk of the blame would fall on the Clinton administration.

The Pew Research Center survey, conducted September 19-22, 2013 among 1,003 adults nationwide, finds that the public is divided over whether a budget deal will be reached by the Sept. 30 deadline for shutting down the government: 46% say the two sides will reach a budget agreement, 45% say they will not.

As in past congressional showdowns over fiscal issues, most Americans (57%) want the lawmakers they agree with on this issue to be more willing to compromise, even if it means passing a budget they disagree with. Just a third (33%) wants lawmakers to stand by their principles, even if the federal government shuts down. 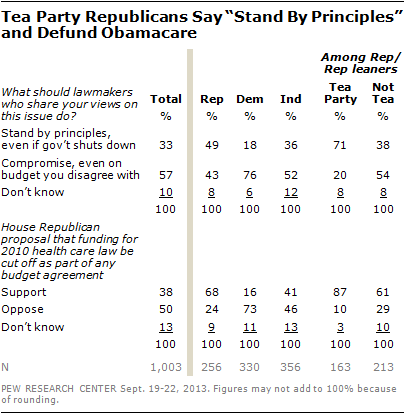 Yet the dominant view among Tea Party Republicans is that lawmakers should stick to their principles, even if that results in a government shutdown.

Fully 71% of Republicans and Republican leaners who agree with the Tea Party say they want lawmakers who share their views to stand on principle, even if that leads to a government shutdown; just 20% want them to compromise, even if that results in a budget they disagree with.

However, there is a substantial divide in the Republican base over how far to go to achieve the goal of defunding the 2010 health care law. By 54% to 38%, non-Tea Party Republicans would like to see a compromise on the budget, even it is one they do not particularly agree with. Most Tea Party Republicans (71%) want lawmakers who share their views to stand by their principles, even it that leads to a government shutdown. 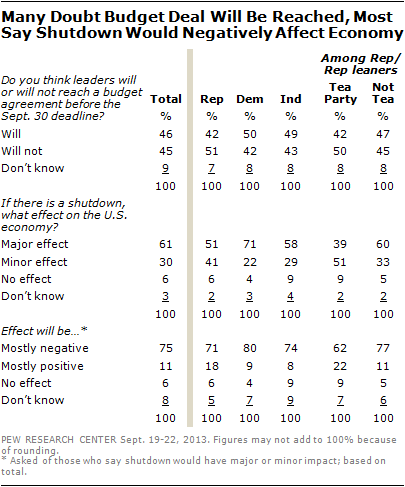 There are no significant partisan differences in views of the likelihood of a last-minute budget deal: 50% of Democrats, 49% of independents and 42% of Republicans say lawmakers will reach a budget agreement by Sept. 30.

Tea Party Republicans, in particular, do not see dire economic consequences from a government shutdown: Only 39% say it would have a major impact on the economy, while 51% say the impact would be minor. Among non-Tea Party Republicans, 60% think a government shutdown would have a major effect on the economy and 33% say it would be minor.

Interest in a Possible Government Shutdown 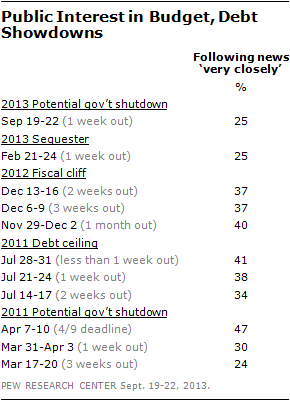 With about a week to go before a possible government shutdown, 25% of the public is following news about budget talks very closely. That is identical to interest in last year’s budget sequester a week before it took effect (25% very closely) and comparable to interest in the potential shutdown in 2011 (30% very closely).

Two years ago, interest in a possible shutdown of the government increased sharply in the days before the April 9 deadline – 47% followed it very closely, up from 30% a week earlier. 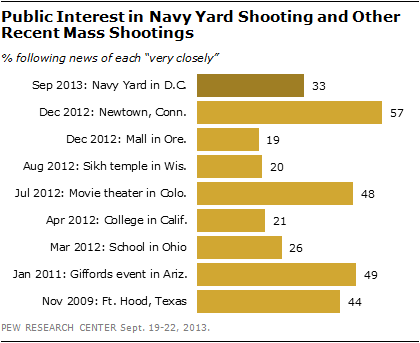 This is substantially less than the share who very closely followed news about shootings last December at Sandy Hook Elementary School in Newtown, Conn. (57%) or last July in an Aurora, Colo. movie theater (48%). About four-in-ten (44%) followed the 2009 shooting at the Fort Hood Army post in Texas very closely.

But more people followed the D.C. shooting than some other recent incidents, including shootings last year at a mall near Portland, Ore. (19% very closely), and at a Sikh temple in Wisconsin (20%).