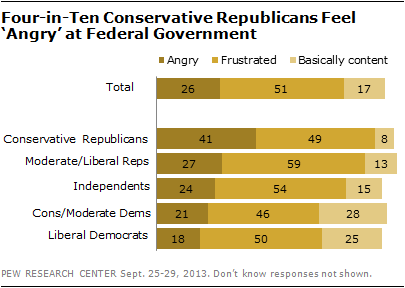 The new national survey by the Pew Research Center, conducted Sept. 25-29 among 1,005 adults, finds that 26% overall say they are angry at the federal government, while 51% feel frustrated. Just 17% say they are basically content with the government.

The share of Americans who say they are angry at the federal government has risen seven points since January and now equals the high reached in August 2011, a few weeks after the widely criticized debt ceiling agreement between the president and Congress.

Since Barack Obama became president in 2009, most of the anger at government has been concentrated among Republicans, especially conservatives and those who support the Tea Party. 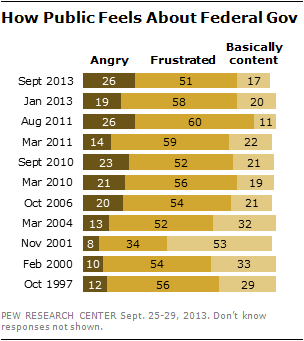 Currently, 50% of Republicans and Republican leaners who agree with the Tea Party say they are angry at the government, compared with just 27% of non-Tea Party Republicans.

But in October 2006, during the Bush administration, liberal Democrats expressed more anger at the government than any other group. At that time, just prior to the 2006 midterm, the percentage of liberal Democrats who said they felt angry at the federal government (44%) mirrors the share of conservative Republicans who say that today (41%).

Attention to the Shutdown Debate 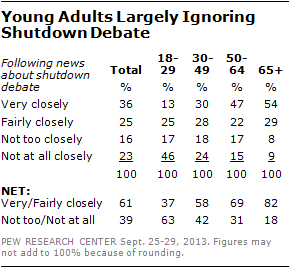 Most Americans (61%) say they are following congressional talks to avoid a government shutdown very or fairly closely, while 39% are following this story not too or not at all closely. 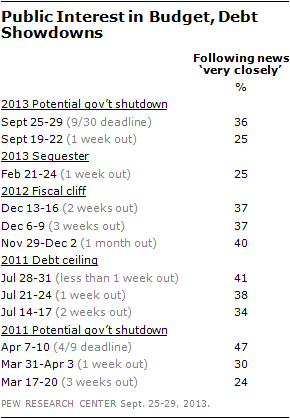 Similar to the debates of 2011 over a potential government shutdown and increase in the debt ceiling, public attention has grown as the deadline for action has gotten closer. Attention to a possible government shutdown this week is up from a week ago, when 25% said they were following the debate very closely.

No Consensus on Cause of Congressional Dysfunction 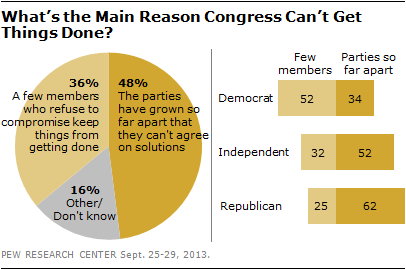 While public frustration with the way Congress operates is widespread, there is little agreement as to the root of the problem. When asked why Congress is unable to get things done, 48% say it is because the political parties have grown so far apart that they can’t agree on solutions, while 36% say it is caused by a few members who refuse to compromise.

Democrats are twice as likely as Republicans (52% vs. 25%) to blame congressional gridlock on a few members holding things up. Republicans are more likely than Democrats (62% vs. 34%) to say this gridlock is the result of the growing distance between the parties more generally. 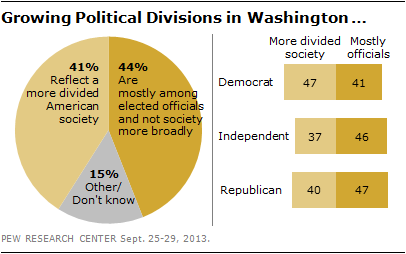 The public is split over whether growing divisions in Washington reflect an increasingly divided society. About four-in-ten (44%) say growing political divisions are mostly among elected officials and not American society more broadly. A comparable percentage (41%) says these divisions among elected officials reflect a more divided American society. Both Democrats and Republicans are split as to whether the partisan division in Washington does or does not reflect a more divided society.