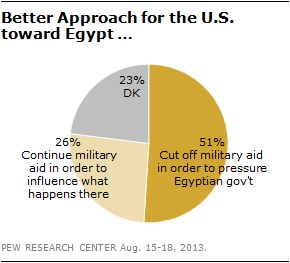 The new national survey by the Pew Research Center, conducted Aug.15-18 among 1,000 adults, finds that half of the public (50%) says that Barack Obama has not been tough enough toward the Egyptian military in responding to the violence against anti-government protesters; just 6% say he has been too tough. However, a sizable minority volunteers that Obama’s response has been about right (12%) or offers no response (32%).

The violence and chaos in Egypt has not attracted much in the way of interest among the U.S. public. Just 22% say they are following news about violence in Egypt very closely, while another 29% are following events there fairly closely. About half of Americans (48%) say they are following news from Egypt not too closely or not at all closely. A Pew Research Center survey last month found that fewer Americans viewed events in Egypt as critical to U.S. interests than did so in February 2011 during the Arab Spring.

For the most part, there are only modest demographic and partisan differences in opinions about the situation in Egypt. However, Republicans (63%) are more likely than Democrats (47%) or independents (46%) to say that Obama has not been tough enough on the Egyptian military in responding to the violence.

Public interest in news about Egypt is higher than it has been in the past few months. But it is far 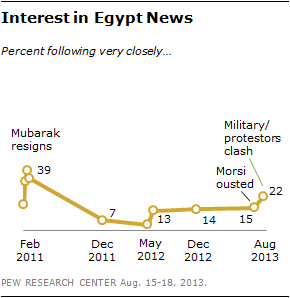 lower than during the Arab Spring two years ago.

In the current survey, 22% say they are following news about political violence in Egypt very closely. In February 2011, when former President Hosni Mubarak resigned after weeks of public protests, 39% were following events in Egpt very closely.

While interest in Egypt’s violent political situation attracted only modest public interest last week, it was the most closely followed news. Interest in Egypt outpaced interest in all other news stories last week; including Attorney General Eric Holder’s announcement on policy 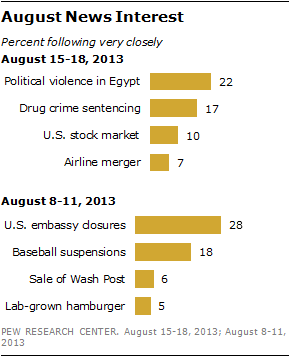 The public paid less attention to news about the U.S. stock market (10% very closely) and the U.S. Justice Department suing to block the merger of American Airlines and US Airways (7% very closely) objecting to restrictions on competition.

Earlier in the month, the U.S. government’s decision to temporarily close several embassies in the Middle East and North Africa due to security concerns topped the public’s news interest, with 28% saying they followed that story very closely in a poll conducted Aug. 8-11, 2013. That same week, Major League Baseball’s decision to suspend players over alleged use of performance enhancing drugs attracted the very closely attention of 18% of the public. Interest in the sale of The Washington Post to Amazon.com CEO Jeff Bezos (6% very closely) and scientists testing the first lab-grown hamburger (5% very closely) attracted the interest of small percentages of the public.