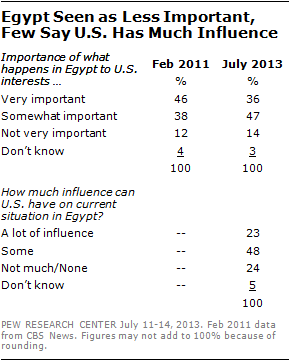 The survey by the Pew Research Center, conducted July 11-14 among 1,002 adults, finds that about a quarter (23%) say the United States can have a lot of influence on the current situation, while nearly as many (24%) say it has little or no influence; 48% say the U.S. can have some influence on events in Egypt.

The recent violent turmoil in Egypt, which followed former president Mohamed Morsi’s ouster by the country’s security forces, has attracted little interest among Americans. Just 15% say they followed Morsi’s removal from power very closely; nearly six-in-ten (59%) followed the news not too closely or not at all closely.

Two years ago, more than twice as many (39%) paid very close attention to the sudden end of Hosni Mubarak’s 30-year rule, following widespread anti-government protests. It was one of the top stories of 2011, a year that featured a number of major overseas news stories.

Interest in current news from Egypt is low across all demographic groups. And there are no significant partisan differences in opinions about the importance of events in Egypt to U.S. interests and the influence of the United States on the current situation there. Currently, 40% of independents, 36% of Democrats and 35% of Republicans say what happens in Egypt is very important to U.S. interests. In a February 2011 poll by CBS News, 53% of Republicans, 47% of Democrats and 44% of independents held this view.

Most Say Issues at Home Concern Them More

Fully 78% say that while the news from Egypt is important, “there are issues in the United States that concern me more.” And a majority (55%) says they feel they lack the background information to really know what is going on there. These opinions are little changed from two years ago, when public interest in Egypt news was substantially higher. 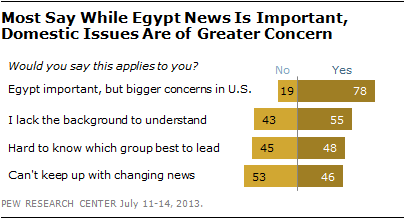 However, the share saying that news from Egypt “is changing so quickly I can’t keep up” has increased 12 points since February 2011 – from 34% to 46%. And about half of Americans (48%) say it is hard to know which group could best lead the country.

These opinions, like views of Egypt’s importance and U.S. influence, span demographic and partisan groups. For instance, comparable percentages of Democrats (52%), independents (49%) and Republicans (46%) say it is hard to know which groups could best lead the country. And nearly equal shares among all three groups say events in Egypt are changing so quickly it is hard to keep up (48% of Democrats, 47% of Republicans, 45% of independents).

Fewer See Events in Egypt as Critical to U.S. Interests
OverviewMost Say Issues at Home Concern Them More
About the Survey