The final days of the trial of George Zimmerman, which concluded July 13 with a verdict of not guilty, attracted relatively modest public interest overall. In a weekend survey, 26% say they were following news about the trial very closely.

However, the story has consistently attracted far more interest among blacks than whites – and that remained the case in the trial’s final days. Blacks are more than twice as likely as whites to say they tracked news about the Zimmerman trial very closely (56% vs. 20%).

Moreover, fully 67% of blacks say they watched at least some live coverage of the Zimmerman trial, compared with 38% of whites. About one-in-five blacks (21%) say they watched “almost all’’ of the trial coverage; just 5% of whites reported watching almost all of it. 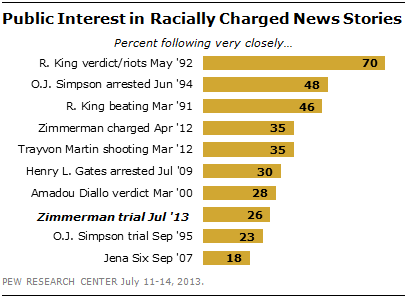 , the day after the Zimmerman verdict, 29% say they were following news about the trial very closely.

The Zimmerman trial and Trayvon Martin shooting have drawn less interest than some other racially charged incidents in recent years, including the riots that followed the Rodney King verdict in 1992 (70% very closely) and O.J. Simpson’s arrest in 1994 (48%).

Blacks have consistently expressed more interest than whites in Trayvon Martin’s shooting and the prosecution and trial of George Zimmerman. Currently 56% of blacks and just 20% of whites say they followed news about the trial very closely. 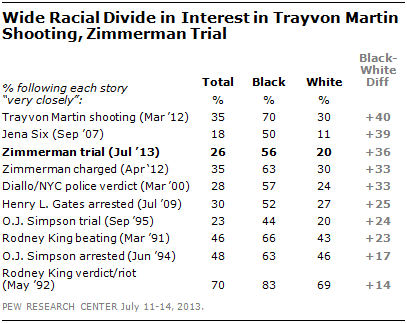 Racial differences in interest about Martin’s shooting and its aftermath are wider than in interest in the police beating of Rodney King in March 1991, as well as the acquittal of the officers and subsequent riots in May 1992. The racial gap in interest in Martin/Zimmerman news also is wider than in O.J. Simpson’s arrest in June 1994 and his trial a year later.

However, the racial gaps in interest were as wide in some other recent racially charged stories – including news in 2007 about the “Jena Six” (the prosecution of Louisiana teens involved in a school fight) and the 2000 acquittal of four New York City police officers in the shooting death of Amadou Diallo. 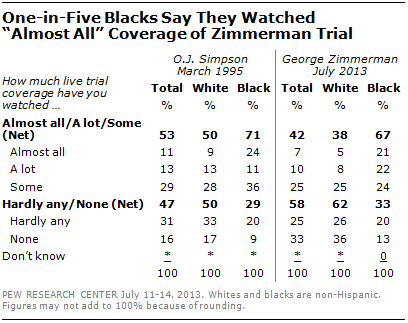 Nearly three times as many whites as blacks say they watched no live coverage of the Zimmerman trial (36% vs. 13%).

About as many blacks reported watching at least some live coverage of the Zimmerman trial as watched the O.J. Simpson trial in 1995. In March of that year, 71% of blacks said they watched at least some trial coverage.

News of the Week 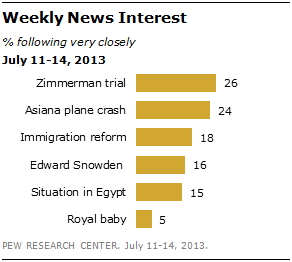 Among other stories, 18% followed news about the debate over immigration policy very closely, while comparable percentages paid very close attention to efforts by Edward Snowden to gain asylum (16%) and the situation in Egypt (15%).

The “royal baby” attracted very little public interest: Just 5% followed news about about the upcoming birth of Prince William and Kate Middleton’s first baby, one of the lowest levels of interest for any news story this year. In recent years, news about the royals has been very limited, with one notable exception – the death of Princess Diana in 1997.

For the entire survey period (July 11-14 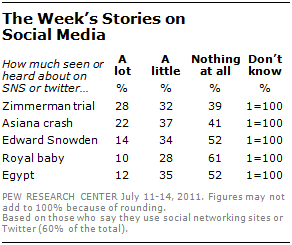 In July 2011, a comparable percentage of those who use social network sites (40%) said they heard a lot about verdict in the Casey Anthony trial from Facebook, Twitter or other social media sites.

Modest Public Interest in Close of Zimmerman Trial
OverviewRacial Gap in News InterestTrial Viewership: Zimmerman vs. O.JNews of the WeekZimmerman Trial and Social Media
About the Survey