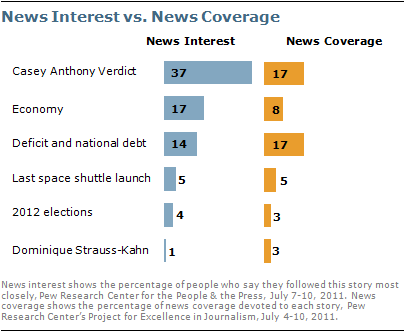 Americans followed news about the verdict in the Casey Anthony murder trial more closely than other top stories by a wide margin last week, but they also kept a watch on news about the nation’s struggling economy and the talks in Washington over raising the federal debt limit.

Nearly four-in-ten (37%) say the Florida jury’s controversial verdict, which found Anthony not guilty of murdering her toddler daughter, was their top story of the week, according to the latest weekly News Interest Index survey conducted July 7-10 among 1,007 adults by the Pew Research Center for the People & the Press. Another 17% say they followed reports about the economy most closely, while 14% cite the deliberations over how to address the federal deficit and the national debt.

News about the economy and the debt limit debate together made up about a quarter of the newshole, according to the Pew Research Center’s Project for Excellence in Journalism (PEJ). The debt debate accounted for 17% of coverage and the economy more generally 8%. The Anthony case made up 17% of coverage and Anthony was easily the week’s top newsmaker. (See Deficit Deliberations and a Surprise Verdict Top the News.)

The murder trial also attracted considerable interest on social networking sites such as Facebook and Twitter. Two-thirds of those who use these sites say they heard a lot (40%) or a little (27%) about the Casey Anthony verdict from social networking, the highest percentage for any of the week’s stories.

Amid continuing signs of a stalled recovery, the U.S. economy was also a popular topic on social networks; 17% of site users say they saw or heard a lot about the economy. Another 39% say they heard a little about this. 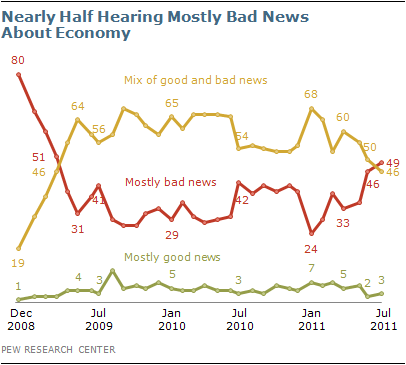 With the federal government releasing a worse than expected unemployment report on July 8, about half of the public (49%) says they are hearing mostly bad news about the economy. That is not much different from early June but up sharply from 35% in mid-May. 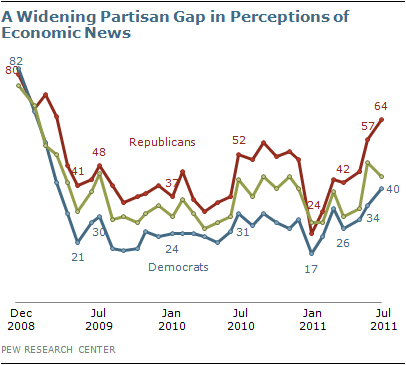 As overall perceptions of economic news have grown more negative, the partisan gap in perceptions has widened. In the new survey, 64% of Republicans say news about the economy is mostly bad, compared with 44% of independents and 40% of Democrats.

In January, when views of economic news were much less gloomy, the partisan differences were much smaller: 24% of Republicans, 17% of Democrats and 28% of independents said news about the economy was mostly bad.

Among Republicans and GOP-leaning independents, those who agree with the Tea Party movement are much more likely to say they are hearing mostly bad news about the economy than are those who disagree with the movement or have no opinion of it (74% vs. 49%). 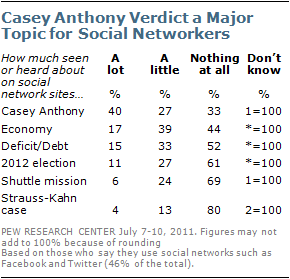 Overall, 46% of the public say they ever use Facebook, Twitter or other social networking sites. And most social networkers say they saw or heard at least a little last week on these sites about the verdict in the Casey Anthony trial (40% a lot, 27% a little). Nearly six-in-ten heard at least a little about economic news (17% a lot, 39% a little) and about half heard this much about the federal deficit and national debt (15% a lot, 33% a little).

Coverage of Anthony Viewed as Fair

On balance, those who have an opinion of how news organizations have covered Casey Anthony and Dominique Strauss-Kahn see the coverage as fair. Most, though, offer no opinion about coverage of the allegations against the former IMF leader.

With few following recent developments in the case against Strauss-Kahn, 57% offered no assessment of whether news organizations have covered him fairly. Still, by nearly three-to-one, more of those who have an opinion say coverage of Strauss-Kahn has been fair (32%) than unfair (11%).

Nearly four-in-ten (36%) say they followed news about the economy very closely last week, comparable to the level of interest in recent weeks; 17% say this was the news they followed most closely. 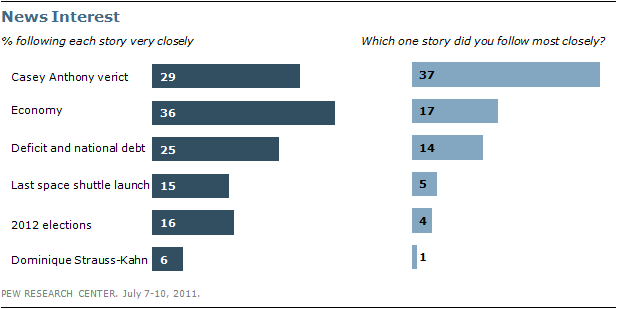 These findings are based on the most recent installment of the weekly News Interest Index, an ongoing project of the Pew Research Center for the People & the Press. The index, building on the Center’s longstanding research into public attentiveness to major news stories, examines news interest as it relates to the news media’s coverage. The weekly survey is conducted in conjunction with The Project for Excellence in Journalism’s News Coverage Index, which monitors the news reported by major newspaper, television, radio and online news outlets on an ongoing basis. In the most recent week, data relating to news coverage were collected July 4-10, and survey data measuring public interest in the top news stories of the week were collected July 7-10 from a nationally representative sample of 1,007 adults.