As Congress debates a bill to overhaul the nation’s immigration policy, much of the public has yet to form an opinion about the legislation. About as many say they favor (33%) as oppose 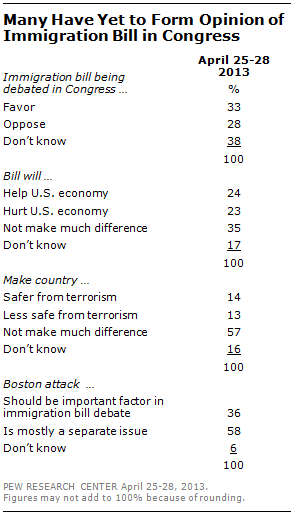 (28%) the immigration bill before Congress, but fully 38% say they don’t know what they think of the legislation.

Overall, the debate over immigration policy has drawn little public attention. Just 19% say they are following the story very closely. And most Americans are unaware of some of the legislation’s visible aspects.

Fewer than half (46%) know that the bill would allow unauthorized immigrants to stay in the country while applying for citizenship. And just 37% know that it was introduced by a bipartisan group of senators. 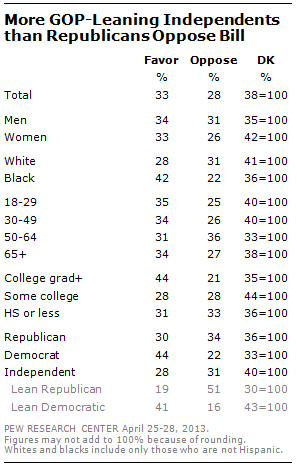 Twice as many Democrats favor (44%) as oppose (22%) the immigration bill currently being debated in Congress, while 33% do not offer an opinion. Republicans are divided with 30% in favor, 34% opposed and 36% not offering an opinion. Independents also are split (28% favor, 31% oppose, 40% don’t know).

Notably, independents who lean to the Republican Party express more opposition to the bill than do self-identified Republicans. About half of Republican-leaning independents (51%) oppose the immigration bill while just 19% favor it.

College graduates support the immigration bill by roughly two-to-one (44% to 21%). Those with lower levels of education are divided over the legislation.

The public does not think the immigration bill before Congress would have a major impact on the economy or the country’s safety from terrorism.

When asked how the immigration bill would impact the U.S. economy, as many say it would help the economy (24%) as hurt the economy (23%). A 35% plurality says the bill 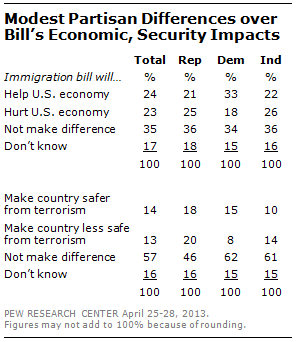 wouldn’t make much difference for the economy and 17% do not offer an opinion.

In addition, 57% do not think the bill would have an effect on the country’s safety from terrorism. Those who see a potential impact are divided over whether the bill would make the country safer (14%) or less safe (13%); 16% do not offer an opinion.

There are modest partisan differences in these opinions. Overall, somewhat more Democrats say the bill would help (33%) rather than hurt (18%) the U.S. economy, while about a third (34%) say it wouldn’t make much difference. About as many Republicans say the bill would hurt (25%) as help (21%) the economy, while 36% say it wouldn’t make much difference. Independents’ views are similar to those of Republicans.

While there has been discussion in Washington about whether the terrorist attack at the Boston Marathon should impact the debate over immigration, a majority of the public sees the 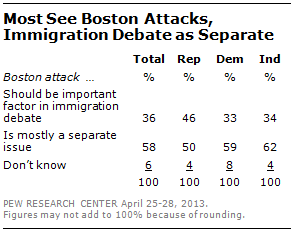 two as separate issues. Nearly six-in-ten (58%) say the bombings and debate over the immigration bill are mostly separate issues, while 36% say the Boston bombings should be an important factor in the debate.

Most independents (62%) and Democrats (59%) see the Boston bombings and immigration debate as separate. Republicans are somewhat more divided: 50% say they are separate issues, 46% say the bombings should be an important factor in the immigration debate. 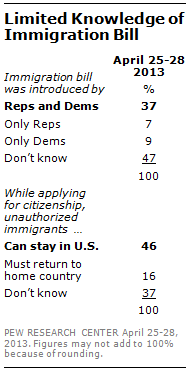 or that the bill stipulates that unauthorized immigrants be allowed to stay in the country while applying for citizenship.

Support for Bill among Knowledgeable 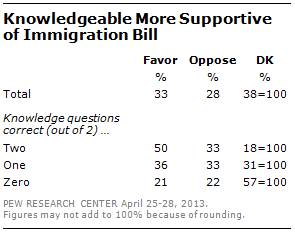 correctly – favor the legislation by 50% to 33%. Those less knowledgeable are more evenly divided. 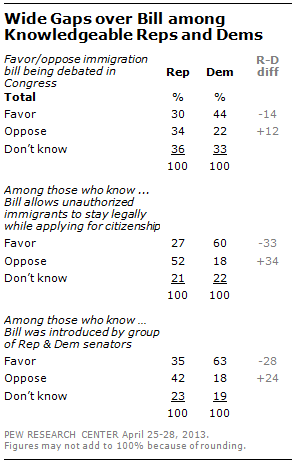 The partisan differences in views of the immigration bill are wider among those who are aware that the bill allows unauthorized immigrants to stay in the U.S while applying for citizenship.

Republicans who know that the bill allows unauthorized immigrants to stay in the U.S. oppose the legislation by nearly two-to-one (52% to 27%). By contrast, Democrats who know this support the bill by three-to-one (60% to 18%).