Even as public views of the federal government in Washington have fallen to another new low, the public continues to see their state and local governments in a favorable light. Overall, 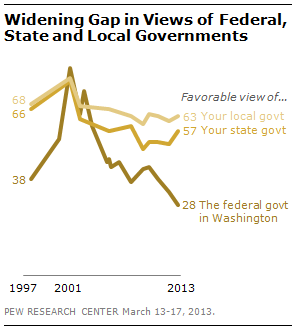 63% say they have a favorable opinion of their local government, virtually unchanged over recent years. And 57% express a favorable view of their state government – a five-point uptick from last year. By contrast, just 28% rate the federal government in Washington favorably. That is down five points from a year ago and the lowest percentage ever in a Pew Research Center survey.

Notably, politically divided state governments get positive ratings from members of both parties. In the 13 states with divided governments – those in which the governor and a majority of state legislators are from different parties – majorities of both Republicans and Democrats express favorable opinions of their state governments.

Currently, 41% of Democrats say they have a favorable opinion of the federal government, compared with 27% of independents and just 13% of Republicans. By contrast, state and local 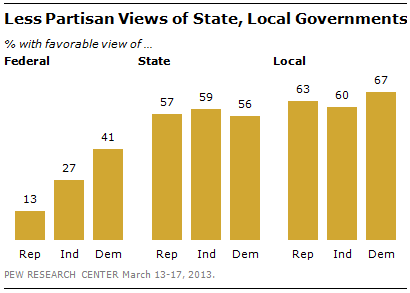 While there is partisan agreement in overall ratings of state governments, these opinions differ markedly depending on which party controls the government. 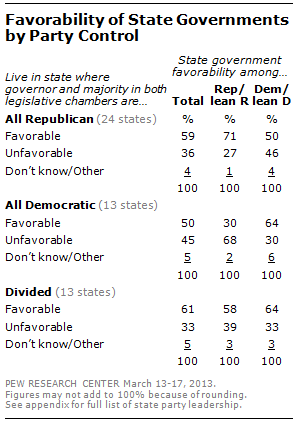 Politically divided state governments receive about the same ratings from Democrats and Democratic leaners (64% favorable) as from Republicans and Republican leaners (58% favorable). 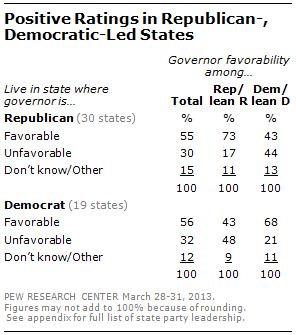 Unlike views of state governments, neither Republicans nor Democrats offer highly negative ratings of their governor, even in cases where the opposing party holds office. 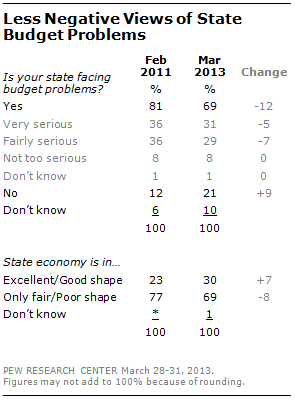 Nearly seven-in-ten Americans (69%) say their state is experiencing budget problems, down from 81% two years ago. The percentage saying their state does not face budget problems has nearly doubled, from 12% to 21%, during this period.

The percentage saying their state’s budget problems are very serious also has dipped, from 36% in February 2011 to 31% currently.

State economic ratings also have shown modest improvement. Three-in-ten (30%) say economic conditions in their state are excellent (3%) or good (27%), up from 23% two years ago. 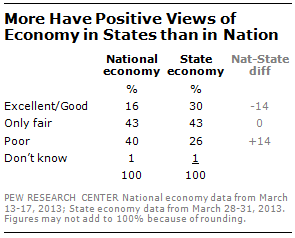 Positive opinions of the government declined through the remainder of George W. Bush’s presidency and have continued to fall during the Obama administration. Currently, 28% have a favorable impression of the federal government while 65% have an unfavorable view.

However, there has been a steep decline in the share of Democrats expressing a favorable opinion of the federal government since Obama took office, from 61% in July 2009 to 41% currently. Favorable opinions also have fallen among Republicans over this period, from 24% to 13% — the lowest ever favorable rating among members of either party.