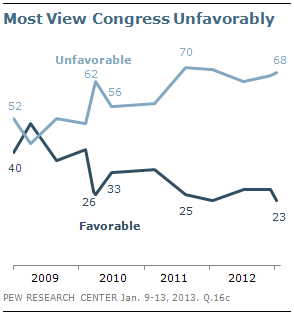 As the 113th Congress gets underway, the favorable ratings for the legislative branch match lows from more than two decades of Pew Research Center surveys. Just 23% of Americans say they have a favorable opinion of Congress. Nearly seven-in-ten (68%) have an unfavorable view.

Four years ago, as Obama came into office, 40% said they had a favorable opinion of Congress, while about half (52%) had an unfavorable one. Opinion improved somewhat in the spring of 2009 – 50% offered a favorable view of Congress that April – but has hovered near long-time lows for much of the past two years. The ratings have fluctuated only slightly in recent months, despite the prolonged standoff over the fiscal cliff. 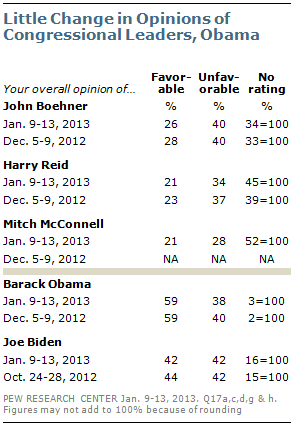 The favorability ratings for three top congressional leaders – John Boehner, Harry Reid and Mitch McConnell –also are on balance, negative. Opinions of these three leaders, like views of Obama and Joe Biden, are little changed following passage of legislation to avert the fiscal cliff.

Democrats also offer divided impressions of Reid; 29% have a favorable opinion of the majority leader and 20% have an unfavorable one. About half (51%) offer no opinion. 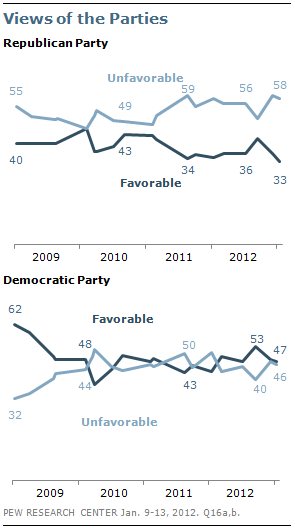 Just a third of Americans (33%) say they have a favorable opinion of the Republican Party, about the same as the lows recorded in August 2011 (34%). Nearly six-in-ten (58%) say they have an unfavorable view of the GOP. Four years ago, opinion was only slightly better. In January 2009, as Obama started his first term, 40% had a favorable opinion of the Republican Party, while 55% held an unfavorable one.

Views of the Democratic Party’s ideology also have remained fairly stable; 22% see it as very liberal, 31% say liberal and 27% say moderate. One-in-ten (11%) say it is conservative, while 2% say it is very conservative. 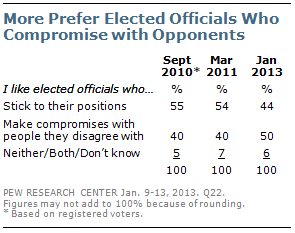 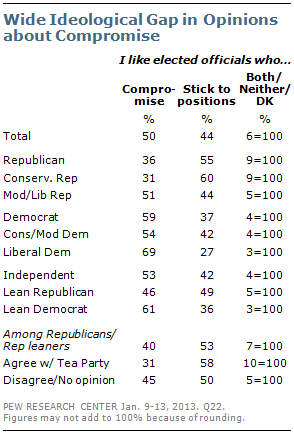 By a wide margin (69% to 27%), liberal Democrats prefer politicians who make compromises with those whom they disagree. By contrast, 60% of conservative Republicans like elected officials who stick to their positions, while just 31% like those who compromise.

Among independents, there are wide differences tied to party leaning. About six-in-ten independents who lean Democratic (61%) say they like those who compromise, compared with 46% of those who lean Republican. 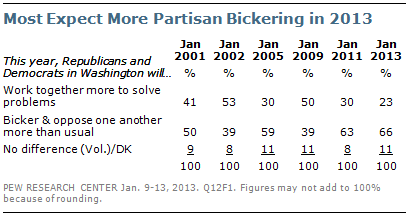 Just 23% of Americans say they expect Republicans and Democrats to work together to solve problems this year. That’s about half the number that said this as Obama took office in January 2009 (50%) and down 7 points since the start of 2011.

Two-thirds (66%) say Republicans and Democrats in Washington are likely to bicker and oppose one another more than usual. Just 39% said this in January 2009. Still, that number has changed little in the past two years. It stood at 63% in January 2011. 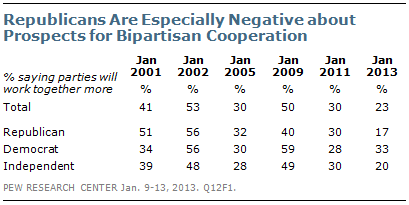 Views of Parties on Issues 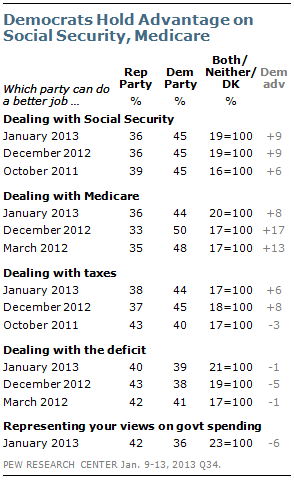 More than four-in-ten (44%) say the Democratic Party can do a better job dealing with Medicare, while 36% choose the Republican Party. The Democratic advantage is down slightly from December.

On the other issues tested, changes were modest. Democrats maintain a nine-point edge on dealing with Social Security (45% vs. 36%). On taxes, 44% say the Democrats can do a better job, while 38% say Republicans can.