As he heads into his second term as vice president, the public’s impression of Joe Biden is mixed: 42% have a favorable opinion, while the same percentage views him unfavorably. Opinions of Biden are little changed over the past year.

Biden’s current rating is somewhat less favorable than the rating for his predecessor, Dick Cheney, early in the Bush administration’s second term: In March 2005, 48% of the public had a 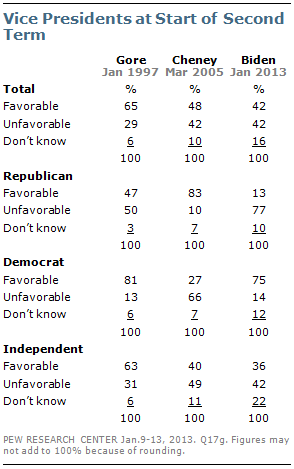 favorable opinion of Cheney. Al Gore’s favorability rating on the eve of his second term as Bill Clinton’s vice president was far more positive than either Biden’s or Cheney’s: in January 1997, 65% viewed Gore favorably while just 29% viewed him unfavorably.

Opinions of Biden are starkly divided along partisan lines. Views among the opposition party have become more negative with each successive vice president. Today, just 13% of Republicans view Biden favorably. That compares to 27% of Democrats who had a favorable opinion of Cheney in 2005, although Cheney’s favorable rating among Democrats would drop to 12% by the spring of 2006. In 1997, nearly half (47%) of Republicans viewed Gore positively; his rating among the GOP also dropped, to a low of 22% in September 1997.

Biden fares about as well among independents as Cheney did eight years ago, with opinions divided. Three-quarters of Democrats (75%) view Biden favorably today, comparable to Democrats’ ratings of Gore at this point in his term. Cheney performed somewhat better among Republicans in 2005. 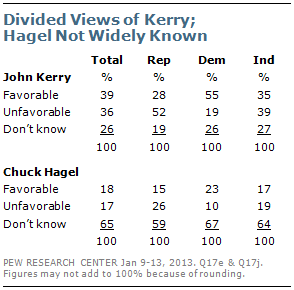 Barack Obama’s nominees for secretary of state and secretary of defense both receive mixed ratings from the public. John Kerry, the better known of the two, is viewed favorably by 39% of the public, while a comparable number (36%) view him unfavorably. Just 35% of the public offers an opinion of Chuck Hagel, Obama’s nominee to head the Department of Defense. Those that do rate Hagel are about equally likely to view him favorably (18%) as unfavorably (17%).

Despite his lower profile, the pattern of partisan opinion is similar for Hagel. By about two-to-one (23% vs. 10%), Democrats view Hagel favorably. Among Republicans, the balance of opinion about Hagel is negative (26% unfavorable, 15% favorable). Hagel receives mixed ratings from independents (17% favorable, 19% unfavorable). 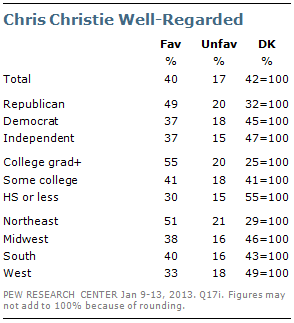 New Jersey governor, although about four-in-ten (42%) do not offer a rating.

While Christie’s ratings are highest in the northeast, where about half (51%) rate him favorably, this is largely due to his higher profile in his home region (northeasterners are more likely than others to offer a rating). The balance of opinion about Christie is consistently positive across regions, as well as most other demographic groups.

And Christie is an increasingly rare political figure today: He is viewed positively by both Republicans and Democrats. Although more Republicans than Democrats or independents offer a rating for Christie, among those who do, Christie’s ratings are comparably positive across all three groups. 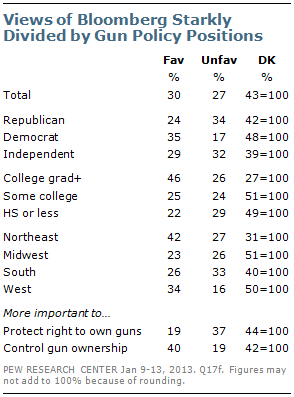 Despite his past Republican party affiliation and current independent status, Bloomberg is viewed positively among Democrats. By roughly two-to-one, more Democrats offer a favorable than unfavorable rating of Bloomberg (35% vs. 17%). Both Republicans and independents are more divided in their ratings.

Bloomberg’s ratings also vary by region and education. Bloomberg fares best in the Northeast, where he is best known, and the West. Midwesterners and Southerners are more divided in their assessments. College graduates rate Bloomberg positively (46% favorable vs. 26% unfavorable), while those with less education are less likely to provide a rating and more divided in their assessments.