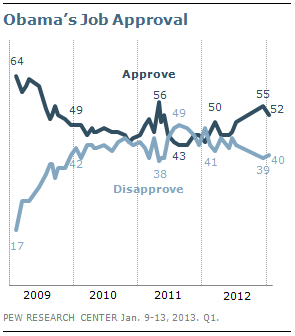 As he prepares for his second inauguration, Barack Obama is in a stronger position with the public than he was over much of his first term. At 52%, his job approval rating is among the highest since the early months of his presidency. His personal favorability, currently 59%, has rebounded from a low of 50% in the fall campaign. And increasing percentages describe him as a strong leader, able to get things done and as someone who stands up for his beliefs.

Obama’s political advantage is enhanced by the poor standing of his Republican counterparts. The latest national survey by the Pew Research Center for the People & the Press, conducted Jan. 9-13 among 1,502 adults finds that both House Speaker John Boehner and 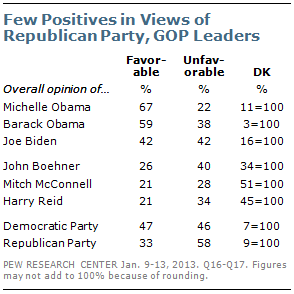 The Republican Party’s image, which reached a recent high of 42% favorable following the GOP convention this past summer, has fallen once again to a low of just 33%. Much of this decline has come among Republicans themselves. Favorable opinions of the GOP among Republicans have fallen 20 points since September (from 89% to 69%) and are now as low as at any point during the past 20 years. 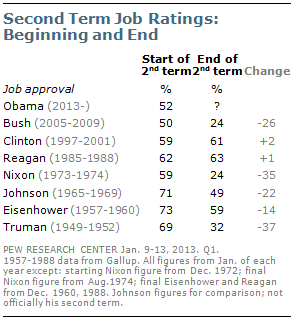 While his personal image is strong, Obama’s current j0b rating is not high compared with other two-term presidents since World War II. Among presidents dating back to Harry S. Truman, only George W. Bush began his second term with a rating about as low as Obama’s (50% approval in January 2005). To a degree, this reflects the partisan polarization in opinions about both Obama and Bush; Obama’s current rating among Republicans (14% approve) is about the same as Bush’s among Democrats eight years ago (17%).

Among recent two-term presidents, none has had a significantly better job approval mark at the end of his presidency than at the start of his second term. 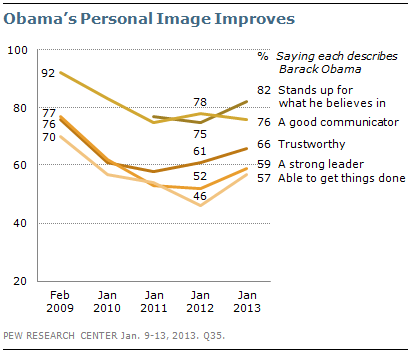 Since Obama entered the White House four years ago, his strongest ratings have typically been on his personal traits, and he has improved his standing on these measures over the past year.

Fully 82% say that Obama stands up for what he believes in; 75% said this a year ago. Nearly six-in-ten (57%) say Obama is able to get things done, up 11 points from a year ago, and 59% say he is a strong leader, up seven points since then.

Nonetheless, these personal ratings are all far lower than they were shortly after he took office four years ago. A few weeks after his inauguration, 70% said he was able to get things done and even higher percentages gave him positive ratings for other attributes. 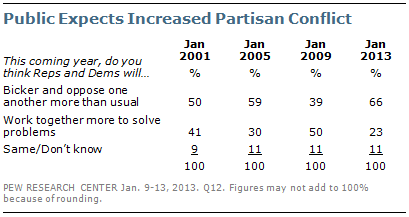 Obama also faces a far more skeptical and frustrated public today than he did four years ago. Just 33% expect economic conditions to get better over the coming year – that figure was 43% in December 2008. And the public is pessimistic about the prospects for bipartisan cooperation in Washington. Just 23% expect Republicans and Democrats will work together more in the coming year, less than half the percentage that expressed that view in January 2009 (50%).

After a series of bruising political battles over the 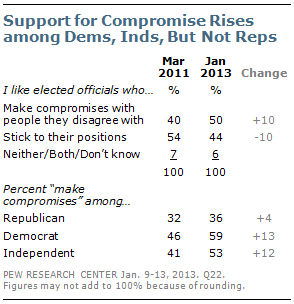 past few years, the public’s desire for political compromise in Washington has increased notably. In March 2011, soon after Republicans gained a majority in the House, 54% said they liked elected officials who stuck to their positions, while 40% liked politicians who made compromises with people they disagreed with. Today, 50% say they like leaders who compromise, and 44% like those who stick to their positions.

The percentages of Democrats and independents saying they prefer politicians who compromise has increased over the past two years. Currently, 59% of Democrats say they like elected officials who make compromises, up from 46% in March 2011. Similarly, there has been a 12-point increase in the percentage of independents expressing a preference for politicians who compromise (from 41% to 53%).

By contrast, Republicans’ opinions are largely unchanged from two years ago. Currently, 55% say they like elected officials who stick to their positions compared with 36% who like elected officials who make compromises. Among conservative Republicans, about twice as many prefer politicians who stick to their positions than those who compromise (60% vs. 31%).

Christie’s Crossover Appeal. Favorable opinions of the New Jersey governor outnumber unfavorable views by two-to-one – among Democrats. He is even more highly regarded among Republicans.

Obama’s Legacy – TBD. A third of Americans (33%) say that in the long run Obama will be a successful president, while 26% say he will be unsuccessful. But a plurality (39%) says it is too soon to tell. Views about Bush were similar at the start of his second term.

Michelle’s Strong Image. While Barack Obama’s favorability rating has improved, the first lady is still more popular than her husband. Currently, 67% view Michelle Obama favorably, while just 22% have an unfavorable opinion of her.