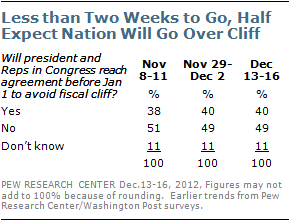 With less than two weeks to go before the nation goes over the fiscal cliff, the public remains pessimistic about the possibility that the president and Congress will reach an agreement by the Jan. 1 deadline. In fact, opinions about the likelihood of a deal remain largely unchanged since early November, when negotiations between the two sides began.

The latest survey by the Pew Research Center for the People & the Press, conducted Dec. 13-16 among 1,006 adults, finds that 40% expect that the president and congressional Republicans will reach an agreement to prevent automatic spending cuts and tax increases from taking effect Jan. 1. Nearly half (49%) say they will not get a deal.

The survey finds that, as was the case in early December, Democrats are more optimistic than Republicans or independents about the possibility of a fiscal cliff agreement. About half of Democrats (51%) expect an agreement to be reached by the Jan. 1 deadline. Majorities of Republicans (59%) and independents (53%) disagree.

Continued Pessimism about Fiscal Cliff Deal
Overview
About the Survey