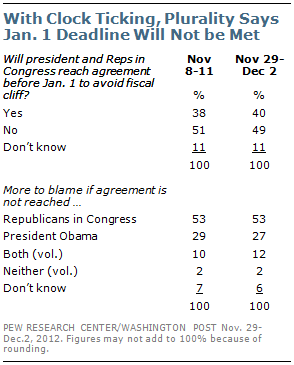 With Washington making little apparent progress in efforts to avoid going over the “fiscal cliff,” public opinion about the situation has changed little over the past three weeks.

The latest national survey by the Pew Research Center for the People & the Press and The Washington Post, conducted Nov. 29-Dec. 2 among 1,003 adults, finds continued pessimism over prospects for a deficit agreement.

Four-in-ten (40%) expect that the president and congressional Republicans will reach a deal by Jan. 1 to prevent automatic tax increases and spending cuts from taking effect; 49% say they will not. If no deal is reached, far more say congressional Republicans would be more to blame (53%) than President Obama (27%). These opinions are virtually unchanged since early November.

Democrats continue to be much more optimistic about prospects for a fiscal cliff compromise than either Republicans or independents. A majority of Democrats (55%) expect Obama and congressional Republicans will reach an agreement before Jan. 1 to prevent the automatic tax increases and spending cuts. Just 37% of independents and 22% of Republicans say an agreement will be reached. 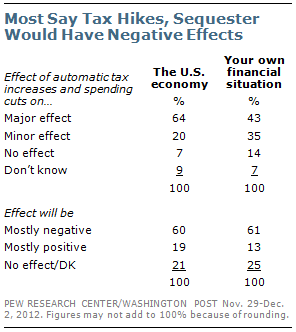 effect. Just 28% say they understand the consequences very well, while 29% understand them fairly well. These impressions also have changed little over the past three weeks.

Nonetheless, the public continues to see dire consequences – both for the nation’s economy and themselves – if the government goes over the fiscal cliff. While more say the nation’s economy (64%) than their own finances (43%) would be greatly affected, roughly six-in-ten say the impact would be negative for both the economy generally (60%) and their own personal finances (61%). 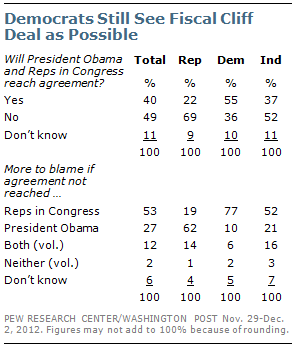 Republicans and Democrats continue to have starkly different expectations for the negotiations aimed at forestalling the automatic spending cuts and tax increases. Fully 69% of Republicans and 52% of independents say Obama and Republicans will not reach agreement in time to prevent the automatic measures from going into the effect. Yet Democrats remain optimistic – 55% predict an agreement will be reached while 36% do not. 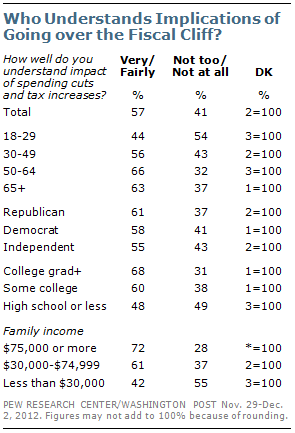 In particular, people with lower family incomes, as well as those with less education and those younger than 30, feel like they have a dim understanding of what might happen if the spending and tax changes kick in. A majority (55%) of those with family incomes of less than $30,000 and 49% of those who have not attended college say they understand the possible implications not too well or not at all well; 54% of Americans younger than 30 say the same.

There are only modest partisan differences in how well people understand the effects of automatic spending cuts and tax increases: 61% of Republicans, 58% of Democrats and 55% of independents say they understand the impact of possible tax and spending changes very or fairly well. 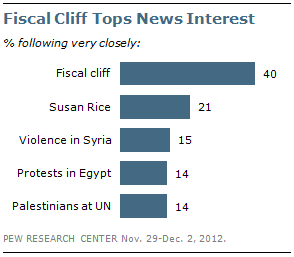 The debate in Washington over the fiscal cliff is the public’s top story this week: 40% paid very close attention to news about the debate over the automatic spending cuts and tax increases that will take effect Jan. 1 unless the president and Congress act.

Only about half as many (21%) followed news about another Washington story very closely – the debate over whether U.N. Ambassador Susan Rice should become secretary of state. Notably, there are only slight partisan differences in interest in the debate over Rice. A quarter of Republicans (25%), 21% of Democrats and 18% of independents followed this story very closely.

Three foreign stories attracted less public interest than news about Susan Rice or the fiscal cliff. Just 15% of Americans say they followed news about violence in Syria very closely; about as many very closely tracked news about political turmoil and protests in Egypt (14%) and the debate at the U.N. over the Palestinian territories (also 14%).