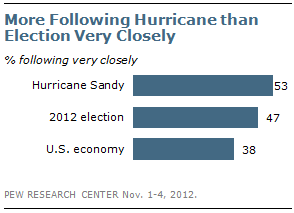 Just over half of the public (53%) say they followed news about Hurricane Sandy and the storm’s impact very closely last week, outpacing interest in the 2012 presidential election (47% very closely) and news about the U.S. economy (38% very closely).

The latest national survey by the Pew Research Center for the People & the Press, conducted Nov. 1-4, 2012, among 1,011 adults, finds that interest in the storm is 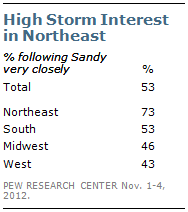 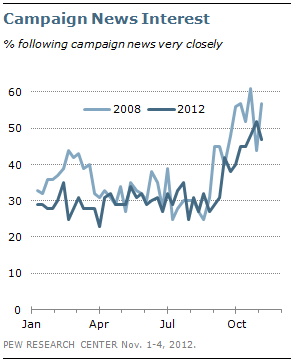 Overall, 47% say they have been following news about the candidates for the 2012 presidential election very closely, down modestly from 52% a week ago. Campaign news interest has lagged behind measures from comparable points in 2008 in four out of the past five weeks. And the high mark for campaign interest measured in 2012 (52% in the Oct. 25-28 survey) is lower than the high measured in 2008 (61% in the Oct. 17-20, 2008 survey).

As has been the case throughout 2012, most Americans 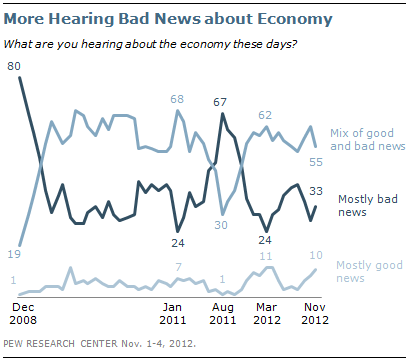 The percentage of independents who say they are hearing mostly bad news about the economy has risen over the past month. In the current survey, 38% of independents say the economic news they have been hearing is mostly bad, up from 29% at the start of October. Views of Republicans and Democrats are little changed.

News about real estate and financial markets remains mixed, with little change in views from October.