Just as the presidential race is deadlocked in the campaign’s final days, the candidates are also running about even when it comes to the ground game. Voters nationally, as well those in the closely contested battleground states, report being contacted at about the same rates by each of the campaigns. And with a fifth of likely voters reporting already having cast their ballots, neither Barack Obama nor Mitt Romney has a clear advantage among early voters. This is in sharp contrast to early voting at this point four years ago, which favored Obama by a wide margin. 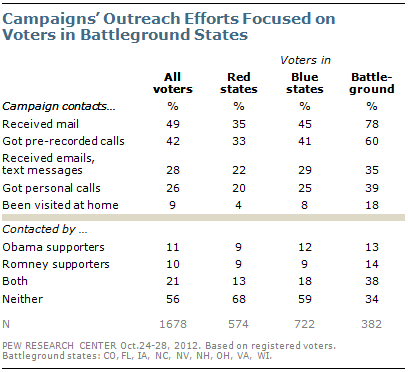 Clearly, both campaigns are concentrating their efforts in the nine battleground states: Fully 78% of registered voters in those states say they have received something in the mail from one or more of the presidential candidates, while 60% have gotten pre-recorded calls about the campaign. Nationwide, 49% have received mail from the candidates and 42% have gotten campaign robocalls.

The latest national survey by the Pew Research Center for the People & the Press, conducted Oct. 24-28 among 1,678 registered voters, including 1,495 likely voters, finds that about a third of all voters (32%) say they have been contacted by the Obama campaign (11%) or both campaigns (21%), while about as many (31%) say they have been contacted by the Romney campaign (10%) or both (21%). The survey was conducted before Hurricane Sandy hit the U.S.

Similarly, among voters in the nine battleground states, nearly identical percentages say they have been contacted by both campaigns (51% by Obama or both, 52% by Romney or both.) 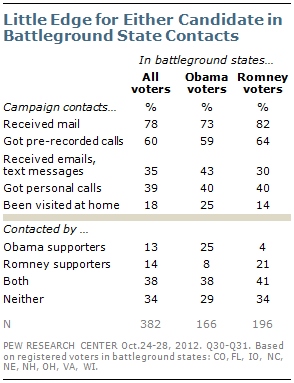 have received mail from the candidates and pre-recorded campaign calls. And identical percentages of both groups say they have received personal phone calls from someone about the campaign (40% each).

However, Obama voters in the battleground states are more likely than Romney voters to say that they have received emails or text messages about the campaign (43% vs. 30%) or have been visited at home by someone talking about the campaign (25% vs. 14%).

Both campaigns have made efforts to increase early voting, particularly in the battleground states. Overall, about a quarter of registered voters (26%) who have been contacted by either the Obama campaign, the Romney campaign, or both, say they have been encouraged to vote before Election Day. Among voters in the battleground states who have been contacted by the campaigns, 36% have been encouraged to vote early. 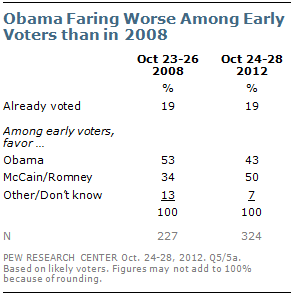 The Pew Research Center survey found that the race is even among all likely voters nationwide (47% Obama, 47% Romney). Unlike the last campaign, the race also is close among voters who say they have already voted.

The poll finds that Romney’s supporters are more likely than supporters of Obama to say they are highly engaged and certain to vote. But on other measures of campaign activism there is little difference between supporters of the two candidates. 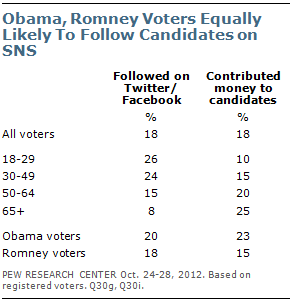 There are age differences in the percentages of voters who follow the candidates on social networks. About a quarter (26%) of voters younger than 30 follow candidate updates on Twitter or Facebook. That compares with 24% of voters 30-to-49, 15% of those 50-to-64 and 8% of those 65 and older. 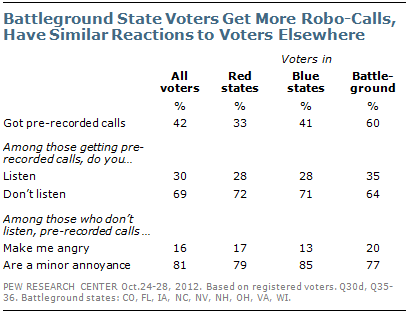 less contested states. But their reactions are similar: 64% of voters in battleground states who get such calls do not listen to them. Similar percentages of voters in red states (72%) and blue states (71%) hang up on robocalls.

Politics from the Pulpit

While many regular churchgoers say they have been encouraged to vote by their clergy, relatively few say church leaders are discussing the candidates directly or favoring one candidate over the other. Black Protestants are far more likely than white Protestants or Catholics to say they are hearing about the candidates and the importance of voting, and the messages they are hearing overwhelmingly favor Barack Obama.

Among those who attend religious services at least once or twice a month, about half (52%) say their clergy have spoken out about the importance of voting over the past few months. Just one-in-five (19%) 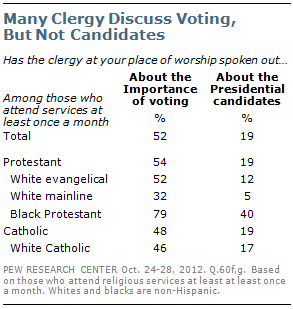 say their clergy have spoken about the candidates themselves, according to the survey, conducted by the Pew Forum on Religion & Public Life and the Pew Research Center for the People & the Press. 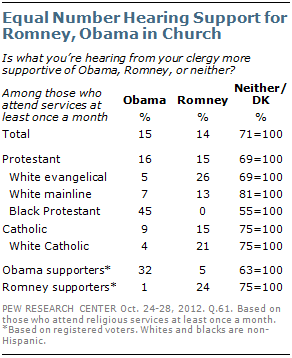 Most regular churchgoers say the messages they are hearing in church are neutral when it comes to the 2012 election – whether or not they mention the candidates directly. Only about three-in-ten say what they are hearing at church is more supportive of one candidate or the other. Among those who feel their clergy’s messages favor a candidate, roughly equal numbers say the messages support Obama (15%) as Romney (14%).

Clergy Discussion of the Issues 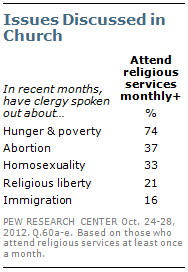 Large majorities of churchgoers in all major religious groups say their clergy have spoken out about hunger and poverty, including 83% of white Catholics, 74% of black Protestants, 73% of white mainline Protestants and 69% of white evangelicals. 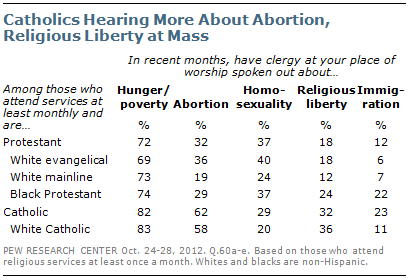 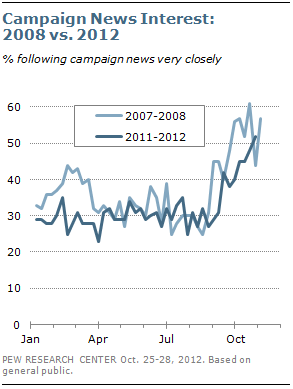 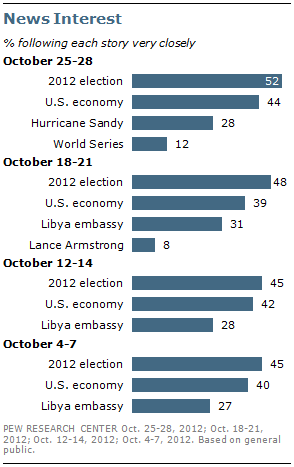 The news interest survey finds that the election and the nation’s economy were the public’s top stories in October.

The current survey finds relatively modest interest in Hurricane Sandy; 28% tracked news about the hurricane very closely. The survey was conducted before the hurricane hit the East Coast on Oct. 29.

In Deadlocked Race, Neither Side Has Ground Game Advantage
OverviewEarly Voting 2008-2012Campaign ActivismRobo-Calls: Most Don’t ListenPolitics from the PulpitClergy Discussion of the IssuesCampaign News InterestOctober News Interest
About the Surveys