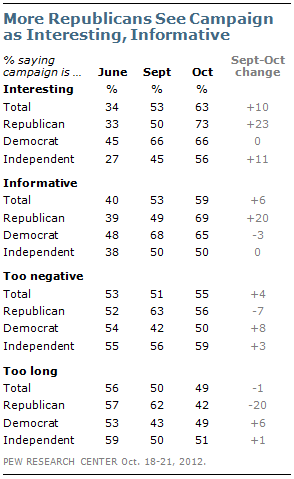 The new survey by the Pew Research Center for the People & the Press, conducted Oct. 18-21 among 1,005 adults, finds that 63% of the public says the campaign is interesting, while 28% say it is dull. Last month, 53% found the campaign interesting. From January through June, majorities said the campaign was dull, and no more than about four-in-ten found it interesting.

The percentage of Democrats who say the campaign is interesting, which jumped 19 points between June and September, is unchanged since then (66%).

Democrats’ and independents’ views about whether the campaign is informative and too long are little changed since September. On both measures, opinions among Democrats turned much more positive between June and September. (For more, see “Democrats Now More Positive on Campaign 2012,” Sept. 12, 2012.)

The new survey also finds no substantial partisan differences in opinions about whether the presidential campaign is too negative: 59% of 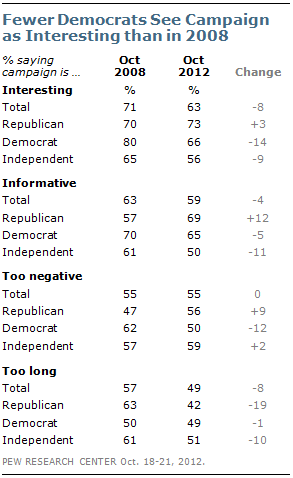 There is broad agreement that the presidential campaign is important: 86% say it is important compared with just 13% who say it is unimportant. Democrats (91%) and Republicans (90%) are more likely than independents (81%) to view the campaign as important. 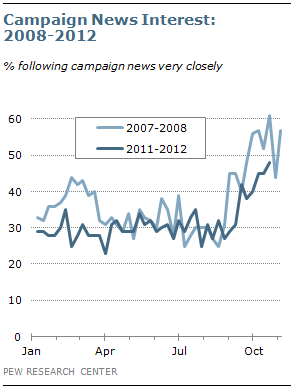 Public interest in news about the campaign is lower than it was in October 2008. Currently 48% say they are following news about the election very closely. That is the highest percentage this year, though not significantly different from the previous two weeks, (45% in Oct. 12-14 and Oct. 4-7).

At a comparable point in mid-October 2008 (Oct. 17-20), 61% said they were following campaign very closely – the highest percentage of the campaign. Interest fell to 44% the following week, before rebounding to 57% the weekend before the election.