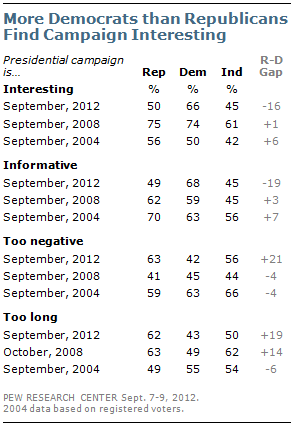 In the wake of the party conventions, Democrats express increasingly positive views of the presidential campaign. And today, substantially more Democrats than Republicans view the campaign as interesting and informative.

The latest national survey by the Pew Research Center for the People & the Press, conducted Sept. 7-9 among 1,012 adults, finds that 66% of Democrats say the presidential campaign is interesting while just 27% say it is dull. Among Republicans 50% say it is interesting while nearly as many (45%) describe it as dull. The gap is about as wide in opinions about whether the presidential campaign is informative – 68% of Democrats say it is informative, compared with 49% of Republicans. 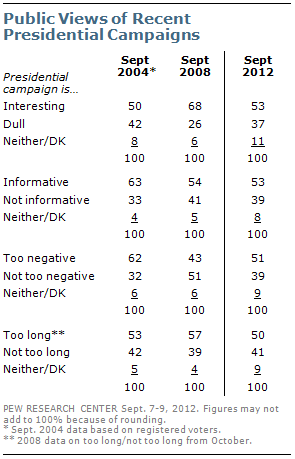 How Opinions Have Changed This Year

Over the course of the current campaign, views of the race have changed substantially. Far more people find the campaign interesting and informative than did so in June or March.

But virtually all of the increase in positive campaign evaluations has come among Democrats and independents. Republicans currently express about the same opinions about the campaign as they did in March, during the GOP primaries, with one exception: More Republicans now say the campaign is too negative than did so then. 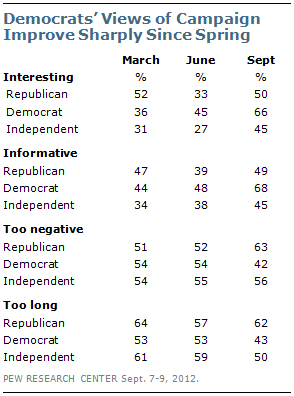 No Spike in Campaign Interest after Conventions

Following the Republican and Democratic conventions, there has been no increase in interest in news about the election. Overall, 31% say they have been following news about candidates for the 2012 presidential election very closely. Interest was about as high in the week before the Republican convention. In a survey conducted August 23-26, 27% said they 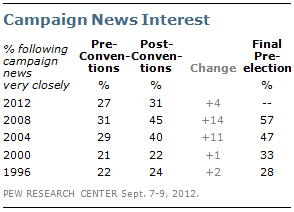 were following news about the presidential election very closely.

Republicans and Democrats are about equally likely to have been following election news. In the current survey, 40% of Democrats and 37% of Republicans say they followed news about candidates for the 2012 presidential election very closely; somewhat fewer independents (25%) say the same. 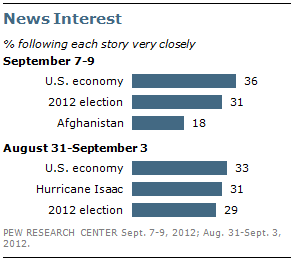