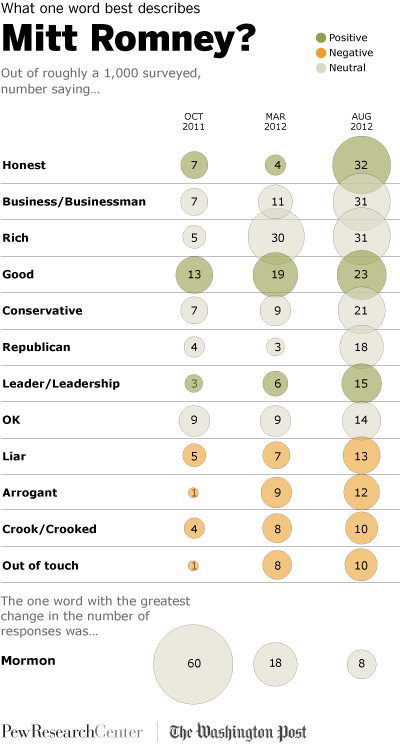 As the American public has learned more about Mitt Romney over the course of the past year, his image has changed substantially. Last fall, the one word that came to mind most frequently when people were asked to describe Romney was Mormon. The same question this spring elicited the words rich and no more frequently than any other. While Romney’s wealth remains a defining feature, today it is joined by the words honest and businessman, two terms that were offered by relatively few as recently as March.

The new national survey by the Pew Research Center and the Washington Post, conducted August 23-26, 2012 among 1,010 adults nationwide, finds that while many people are now using different words to describe Romney, the words remain on balance more negative than positive. Romney elicits far more positive reactions from Republicans now than in the spring, but both Democrats and independents continue to say more negative than positive things about him. 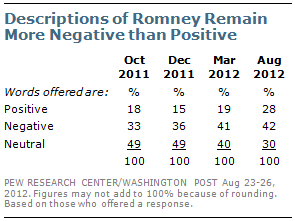 Overall, 42% of the words volunteered by respondents are clearly negative, most commonly liar, arrogant, crook, out of touch, distrust and fake. Fewer (28%) offer words that are clearly positive in tone, such as honest, good, leadership, and capable. The remaining 30% of words are more descriptive and neutral in their tone, including businessman, rich, conservative, and Republican. As the campaign progresses, fewer Americans are offering neutral descriptions of Romney, but people continue to have more negative than positive things to say about him.

The tone of these responses is in line with the favorability ratings in both Pew Research Center and Washington Post polling. The Pew Research Center for the People & the Press’s most recent measure of Romney’s favorability in late July found more voters expressing an unfavorable than favorable view of Mitt Romney by a 52% to 37% margin. The most recent update of candidate favorability by the Washington Post/ABC News, conducted just this past weekend, also remains in negative territory with no improvement in recent months.

While the tone remains negative, the substance of what people say about Romney is substantially different. The words honest and businessman are now among the most common words people associate with Romney, with 32 and 31 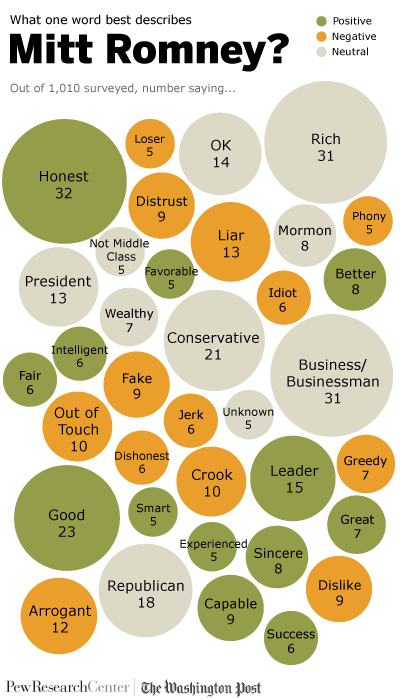 The survey also finds the word conservative rising as a description of Romney. Today, it is among a handful of words volunteered by 20 or more people. It was used by fewer than 10 people in each previous survey. About as many Republicans, Democrats and independents use this term to describe Romney. Romney’s running mate, Paul Ryan, is also frequently described as conservative in the same survey.

Equally telling are the words that do not come up as often when people think of Romney. Most notable is his religion. Last October, the word Mormon was far and away the most common word associated with Romney, mentioned by 60 people. By March, just 18 people mentioned Romney’s religion, and in the current survey, only 8 people say Mormon is the first word they associate with him.

On a smaller scale is a drop in references to Romney’s Massachusetts health care record. Last October, that was the second most common idea associated with Romney after his faith. Not a single respondent in the current survey made mention of this part of his record. Another term that has become less common is flip-flopper, mentioned by more than 10 people in every previous survey, but by just four people in the current survey. 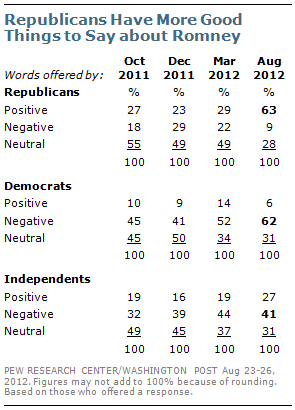 On the eve of his nominating convention, Mitt Romney elicits a much more positive response from within his party than in the past. Currently, 63% of Republicans who offer a response describe Romney in clearly positive terms, up from just 29% as recently as March. The words honest and leadership are among the most common positive Republican descriptors. Just 28% of Republicans offer a negative description of Romney.

At the same time as positive one word descriptions of Romney have risen among Republicans, Democrats have been using more negative words. Today, 62% of Democrats use a clearly negative term to describe Romney, with liar, arrogant, and distrust among the most common. The single most frequent word Democrats offer is rich, coded here as neutral in tone.