In the final two weeks of July, Americans kept a close watch on news about a deadly shooting rampage at a Colorado movie theater, but they also closely tracked news about two long-running stories – the condition of the nation’s economy and the 2012 presidential campaign.

News about the shootings, which left 12 dead and dozens injured, topped the News Interest Index for the month and the story is among the most closely followed so far in 2012. 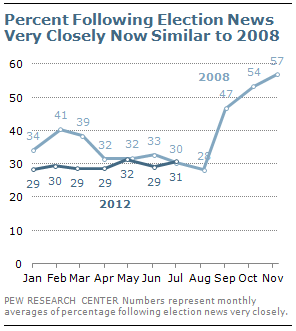 Interest in news about the presidential election is now at a level comparable to interest at about the same point in the 2008 campaign. Looking at monthly averages, 30% said they followed election news very closely in July 2008; this July, 31% say this.

The public’s interest in the 2012 campaign has fluctuated only slightly so far this year. In 2008, interest rose early in the year as Barack Obama and Hillary Clinton engaged in a primary fight for the Democratic nomination. Interest subsided somewhat mid-year but then climbed as the fall campaign got underway. In October and November, more than half of the public said they were following news about the 2008 campaign very closely.

Looking at other news last month, nearly three-in-ten (28%) said in the July 19-22 survey that they very closely followed news about drought conditions across much of the country and its impact on farms and crops. Those in the Midwest (34%) and the South (32%) were somewhat more likely to say they followed this news very closely than those in the Northeast (21%) and those in the West (22%). Earlier in the month in the July 5-8 survey, 27% said they very closely followed news about strong storms in the Midwest and the East and continued power outages.

In the July 12-15 survey, 25% say they very closely followed news about the report on the sex abuse scandal at Penn State University that faulted senior officials for failing to protect children from abuse. Interest in this news was comparable across most demographic groups.

One week later, about a quarter (23%) very closely followed news about the debate in Washington over automatic spending cuts and tax increases that will take effect in January unless Congress acts. Republicans and Democrats expressed similar levels of interest in this story (30% of Republicans and 25% of Democrats said they followed this news very closely).

These findings are based on the most recent installments of the weekly News Interest Index, an ongoing project of the Pew Research Center for the People & the Press, building on the Center’s longstanding research into public attentiveness to major news stories. Survey data measuring public interest in the top news stories of the past week were collected July 26-29 from a nationally representative sample of 1,010 adults.