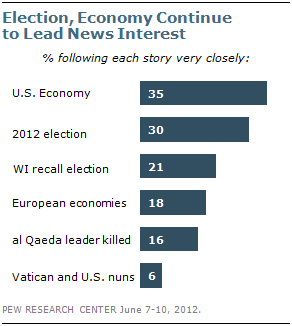 The public continued to track news about the economy and the presidential election, while paying less attention to another important political story – Wisconsin Gov. Scott Walker’s victory in a hard-fought recall election.

The latest weekly News Interest Index, conducted June 7-10 among 1,000 adults by the Pew Research Center for the People & the Press, finds that 35% say they followed reports about U.S. economic conditions very closely while 30% tracked news about the presidential election very closely.

The public expressed less interest in news about the Wisconsin recall election (21% very closely), European economic problems (18%) and the CIA killing of an al Qaeda leader in a drone strike in Pakistan (16%).

The Wisconsin recall election attracted more interest among Republicans (31% very closely) than Democrats or independents (20% each). 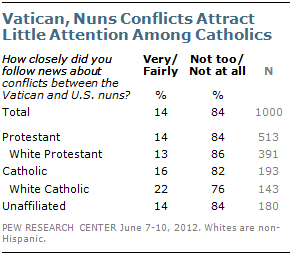 Just 6% of Americans say they very closely followed news about recent conflicts between the Vatican and U.S. nuns. Fewer than one-in-five (14%) followed this story either very or fairly closely; 84% say they followed this news not too closely or not at all closely.

Even among Catholics, this story attracted little interest. In fact, nearly identical percentages of Catholics (16%), Protestants (14%) and the religiously unaffiliated (14%) paid very close attention to the conflicts between the Vatican and American nuns. White Catholics are somewhat more interested than are white Protestants (22% very closely vs. 13% very closely).

These findings are based on the most recent installment of the weekly News Interest Index, an ongoing project of the Pew Research Center for the People & the Press, building on the Center’s longstanding research into public attentiveness to major news stories.