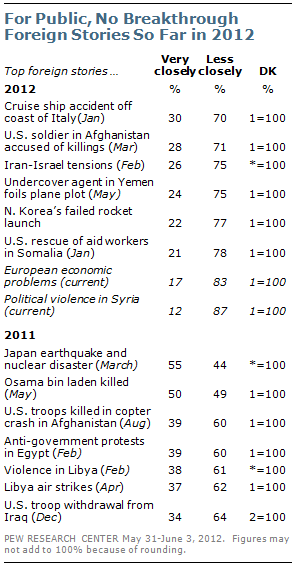 Public interest in foreign news stories has been modest so far this year, in stark contrast to 2011 when several overseas news stories, from the Japanese tsunami and nuclear disaster to the “Arab spring,” attracted substantial attention.

The latest weekly News Interest Index, conducted May 31 to June 2 among 1,012 adults, is fairly typical in this regard. Just 17% tracked news about the ongoing economic problems in Europe very closely. And despite reports of a recent massacre of civilians in Syria, just 12% followed political violence in that country very closely.

That is relatively consistent with interest in the European economic crisis and events in Syria since the beginning of the year.

The most closely followed foreign stories this year have been the deadly crash of a cruise ship off of the coast of Italy and allegations a U.S. soldier killed a number of civilians in Afghanistan. About three in-ten followed each of these stories very closely (30% cruise ship, 28% Afghan killings).

In 2011, several foreign news stories attracted high levels of public interest. In fact, two of the year’s three top stories were overseas events – the Japanese tsunami and nuclear disaster (55% very closely) and bin Laden’s killing (50%). The third was a run-up in gas and oil prices last year, which 53% followed very closely. (For more, see “2011: A Year of Big Stories Both Foreign and Domestic”, Dec. 21, 2011.)

The dramatic changes unfolding in several Middle Eastern countries also drew considerable public attention. In February 2011, nearly four-in-ten Americans (39%) followed anti-government protests in Egypt and the resignation of Hosni Mubarak very closely. And even before the United States and its allies launched airstrikes in support of anti-government rebels in Libya in late March, 38% tracked news about violence in Libya very closely.

This year, violence in Syria and other events in the Middle East have drawn far less interest. They also have drawn far less press coverage than did the standoff in Cairo’s Tahrir Square and other events in the region last year. The Syrian government has placed severe restrictions on foreign press coverage of the conflict in the country. Reports by the Project for Excellence in Journalism (PEJ) have found that over the past year events in Syria have generally accounted for no more than 3%-4% of news coverage per month. (For more, see PEJ’s “What Happened to Coverage of the Arab Spring,” April 13, 2012.) 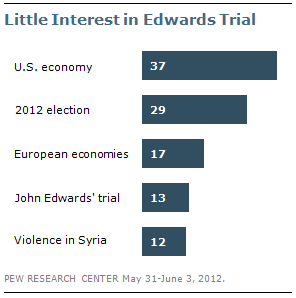 Nearly three-in-ten (29%) say they are following news about the presidential candidates very closely, which also is little changed from the past few months. And while there is scant public interest in news about Europe’s economic problems and political violence in Syria, interest in the conclusion of the John Edwards trial also attracted little interest. Just 13% say they followed news about the Edwards verdict very closely. Edwards was acquitted on one campaign fraud charge, while the jury deadlocked on five other charges.

These findings are based on the most recent installment of the weekly News Interest Index, an ongoing project of the Pew Research Center for the People & the Press, building on the Center’s longstanding research into public attentiveness to major news stories. Survey data measuring public interest in the top news stories of the week were collected May 31-June 3 from a nationally representative sample of 1,012 adults.