Unlike a landline phone, a cell phone is assumed in Pew Research polls to be a personal device. Interviewers ask if the person who answers the cell phone is 18 years of age or older to determine if the person is eligible to complete the survey. This means that, for those in the cell sample, no effort is made to give other household members a chance to be interviewed. Although some people share cell phones, it is still uncertain whether the benefits of sampling among the users of a shared cell phone outweigh the disadvantages.

In the standard survey, people reached on cell phones were offered $5 compensation for the minutes used to complete the survey on their cell phone. In the high-effort survey, a $10 monetary incentive was initially offered to everyone, regardless of what phone they were reached on. After the first five weeks of the field period, the monetary incentive was increased to $20 and all noncontacts and refusals in the landline frame for whom we could match an address to were sent a letter with a $2 incentive. Incentives and mailed letters were used in the high-effort survey because they have been shown to boost participation in many types of surveys. In the high-effort survey, interviewers also left voicemails when possible for both landlines and cell phones that introduced the study and mentioned the incentive. After the first five weeks of the high-effort survey, all calls were made by elite interviewers, who are experienced interviewers that have a proven record of persuading reluctant respondents to participate.

The sample is then weighted to population parameters using an iterative technique that matches gender, age, education, race, Hispanic origin and nativity, region, population density and telephone status and usage. The population parameters for age, education, race/ethnicity, and region are from the Current Population Survey’s March 2011 Annual Social and Economic Supplement and the parameter for population density is from the Decennial Census. The parameter for telephone status and relative usage (of landline phone to cell phone for those with both) is based on extrapolations from the 2011 National Health Interview Survey. The specific weighting parameters are: gender by age, gender by education, age by education, race/ethnicity (including Hispanic origin and nativity), region, density and telephone status and usage; non-Hispanic whites are also balanced on age, education and region. The weighting procedure simultaneously balances the distributions of all weighting parameters at once. The final weights are trimmed to prevent individual cases form having too much influence on the final results.

The following table shows the survey dates, sample sizes, design effects and the error attributable to sampling that would be expected at the 95% level of confidence for the total sample:

In addition to sampling error, one should bear in mind that question wording and practical difficulties in conducting surveys can introduce error or bias into the findings of opinion polls

Comparisons were made to benchmarks from several government surveys throughout the report. Many of the comparisons are from the Current Population Survey, including the March 2011 Annual Social and Economic Supplement, the September 2011 Volunteering Supplement, the November 2010 Voting Supplement and the Civic Engagement Supplement, as well as the October 2010 Computer and Internet Use Supplement. Comparisons are also made to the 2010 National Health Interview Survey. For most comparisons, an effort was made to match the question wording used in the survey to that used in the government survey. See the topline for full details about which survey a benchmark is from and whether there are any differences in the question wording. 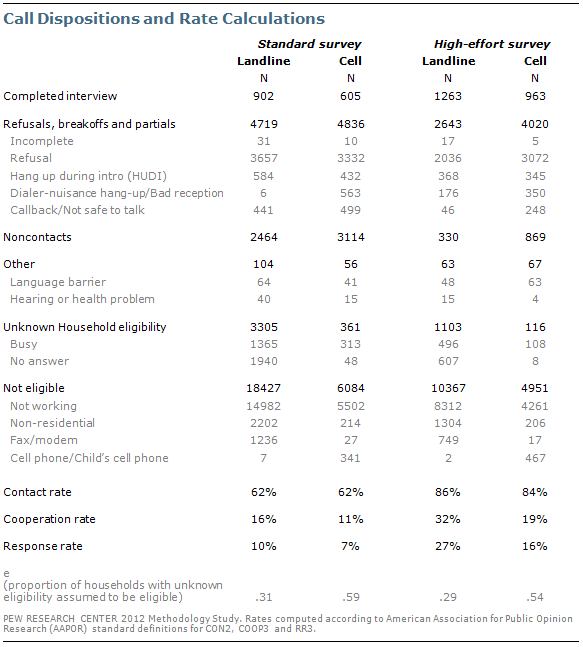