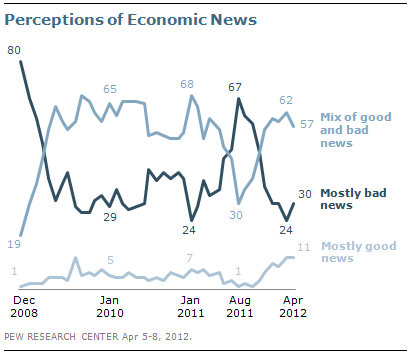 Most Americans continue to say they are hearing a mix of good and bad news about the nation’s economy, though the percentage hearing mostly bad news has ticked up since last month.

Public perceptions of the tone of economic news are not much different than they were one year ago. Now, though, the number hearing mostly good news – while still small – is double what it was last April (11% vs. 5%). Views of economic news turned much more negative last August, amid fears that the economy could be slipping back into recession. At that point, 67% said they were hearing mostly bad news about the economy

Majorities of each partisan group say they are hearing a mix of good and bad economic news, but Democrats are much more 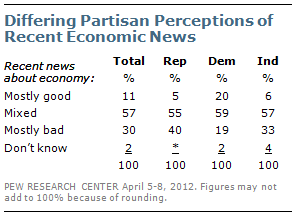 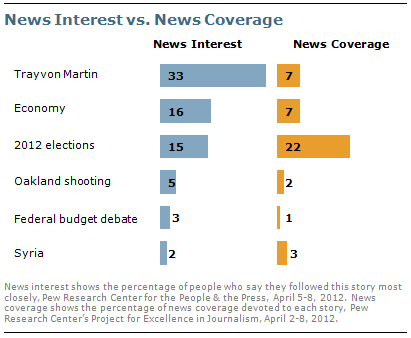 For the third straight week, the controversy over the shooting death of Trayvon Martin was the public’s top story, though coverage dropped considerably. A third of the public (33%) say they followed news about the death of the African American teenager in Florida more closely than any other news, about twice the percentage citing the economy (16%) or the 2012 elections (15%). News about the controversy made up 7% of coverage, down from 18% one week earlier, according to a separate analysis by the Pew Research Center’s Project for Excellence in Journalism (PEJ).

African Americans continue to follow news about the controversy more closely than whites. About seven-in-ten blacks (72%) say they followed Trayvon Martin developments more closely than any other story, compared with 26% of whites. Looking at partisans, 45% of Democrats say this was their top story last week, three times the 15% of Republicans that say this. Among independents more than a third (36%) say this was their top story. 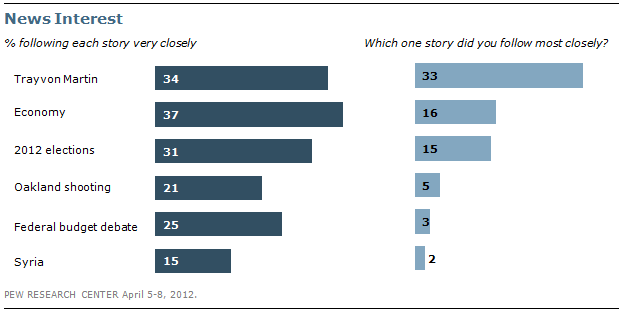 About three-in-ten (31%) say they very closely followed news about the candidates for president in 2012. Republicans are more likely to say they followed this news very closely (43%) than are Democrats (32%) or independents (26%). With several primaries last week, election news topped coverage, accounting for 22% of the newshole.

Just 15% say they very closely followed news about international efforts to stop the political violence in Syria; 2% say this was the news they followed most closely. News about Syria accounted for 3% of coverage.

These findings are based on the most recent installment of the weekly News Interest Index, an ongoing project of the Pew Research Center for the People & the Press. The index, building on the Center’s longstanding research into public attentiveness to major news stories, examines news interest as it relates to the news media’s coverage. The weekly survey is conducted in conjunction with The Project for Excellence in Journalism’s News Coverage Index, which monitors the news reported by major newspaper, television, radio and online news outlets on an ongoing basis. In the most recent week, data relating to news coverage were collected April 2-8, and survey data measuring public interest in the top news stories of the week were collected April 5-8, 2012, from a nationally representative sample of 1,000 adults.