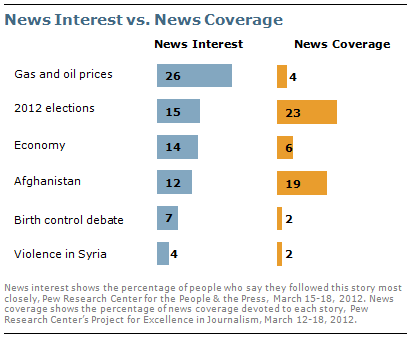 About a quarter (26%) say they followed news about rising gas and oil prices more closely than any other story, according to the latest weekly News Interest Index survey, conducted March 15-18 among 1,009 adults by the Pew Research Center for the People & the Press.

Despite the strong interest, news about rising fuel prices made up a modest 4% of the week’s coverage analyzed by the Pew Research Center’s Project for Excellence in Journalism. More general economic stories accounted for 6% of coverage, but the week’s top stories were the 2012 elections (23% of coverage) and the situation in Afghanistan (19%).

Fully 12% say they followed news about the situation in Afghanistan most closely last week, comparable to the 15% that say news about the election was their top story or the 14% who say this about economic news. 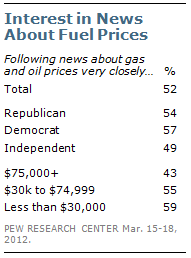 The numbers following news about rising gas and prices are high across demographic and partisan groups, though there is a gap between the most affluent households and other income levels.

With so much focus on rising fuel prices, a separate Pew Research Center survey this week found that the public continues to see development of alternative energy sources as a higher priority than increased production of oil, coal and natural gas, though the gap has narrowed since a year ago (See: “As Gas Prices Pinch, Support for Oil and Gas Production Grows”).

While news about rising fuel prices grabbed the public’s attention, Americans also kept a close watch on news about the economy more generally. Four-in-ten (40%) say they followed news about the condition of the U.S. economy very closely, a level little changed in recent weeks; 14% say this was the news they followed most closely.

Nearly three-in-ten (28%) say they followed news about the candidates for president very closely amid the continuing fight for the Republican nomination. Republicans (36%) and Democrats (32%) are about equally likely to say this, while interest is lower among independents (19% very closely). Election news accounted for 23% of the newshole, more than any other story. 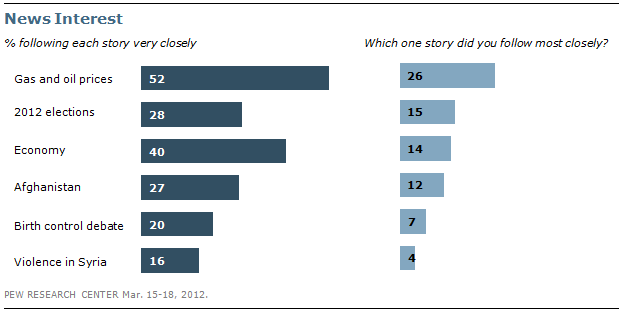 Two-in-ten (20%) say they very closely followed the ongoing debate over insurance coverage for contraceptives and the federal health care reform law enacted in 2010; 7% say this was the story they followed most closely. The debate over the Affordable Care Act made up 3% of the newshole, with most of that (2% of overall coverage) tied to the specific debate over contraceptives. Women are nearly twice as likely as men to say they followed news about this debate very closely (26% vs. 14%). Partisans express comparable interest in this story.

Fewer than two-in-ten (16%) say they very closely followed news about the ongoing political violence in Syria; 4% say this was the news they followed most closely. Interest in the situation in Syria has been at about the same level since early this year. News about Syria made up 2% of coverage.

These findings are based on the most recent installment of the weekly News Interest Index, an ongoing project of the Pew Research Center for the People & the Press. The index, building on the Center’s longstanding research into public attentiveness to major news stories, examines news interest as it relates to the news media’s coverage. The weekly survey is conducted in conjunction with The Project for Excellence in Journalism’s News Coverage Index, which monitors the news reported by major newspaper, television, radio and online news outlets on an ongoing basis. In the most recent week, data relating to news coverage were collected March 12-18, and survey data measuring public interest in the top news stories of the week were collected March 15-18, 2012 from a nationally representative sample of 1,009 adults.