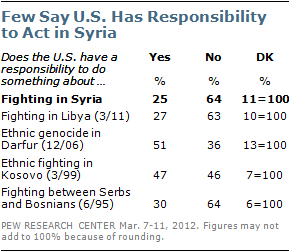 There is strong public sentiment against the United States intervening in the fighting in Syria between government forces and anti-government groups. Nearly two-thirds (64%) say the United States does not have a responsibility to do something about the conflict in Syria. Similar percentages oppose the U.S. and its allies bombing Syrian military forces to protect anti-government groups, as they did in Libya, and sending arms and military supplies to those fighting the government of President Bashar al-Assad.

The public also continues to support withdrawing U.S. forces from Afghanistan as soon as possible. But when it comes to Iran’s nuclear program, there is greater concern that the United States will wait too long to act than that it will act too quickly.

The latest national survey by the Pew Research Center for the People & the Press, conducted March 7-11 among 1,503 adults finds that opposition to U.S. involvement in Syria crosses party lines. Majorities of Republicans and Democrats say the U.S. does not have a responsibility to get involved, and reject airstrikes or the shipment of arms to anti-government forces.

There are much wider partisan differences over whether or not to maintain U.S. forces in Afghanistan and in concerns about Iran. Overall, 57% say U.S. forces in Afghanistan should be removed as soon as possible while 35% say the troops should remain until the situation there is stable. In dealing with Iran, more Americans say their greater concern is that the United States will wait too long to take action, rather than it will take action too quickly (54% to 34%).

Current views about possible U.S. involvement in Syria are similar to opinions about the prospect of U.S. military action in Libya last year, shortly before the U.S. and its allies launched air strikes in support of anti-government rebels. 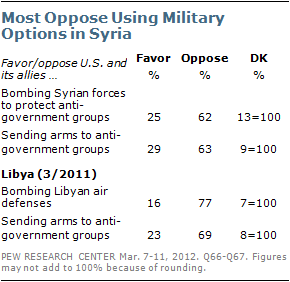 There also is strong opposition to using military options in dealing with Syria. Fully 62% oppose bombing the Syrian military and 63% are against sending arms to anti-Assad groups. Last year, prior to the allied military mission in Libya, 69% opposed arming anti-government rebels and 77% opposed bombing Libyan air defenses.

After the allies launched air strikes against Libya last year, there was modest public support for the military operation; 47% said the airstrikes were the right decision while 36% said they were the wrong decision. (See “Modest Support for Libya Airstrikes, No Clear Goal Seen,” March 28, 2011). In September, even after the rebels took control of Tripoli and Gadhafi went into hiding, fewer than half (44%) said that the airstrikes were the right decision. (See “Libya: Steady Views, Declining Interest,” Sept. 8, 2011). 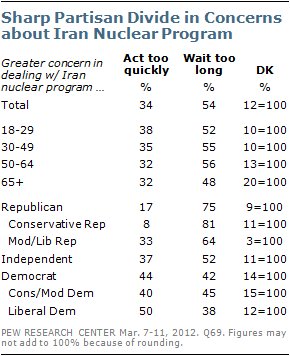 A majority (54%) of Americans say they are more concerned that the U.S. will take too long to act in dealing with Iran’s nuclear program, while 35% are concerned that it will act too quickly. This is similar to public opinion in 2006 and 2007. 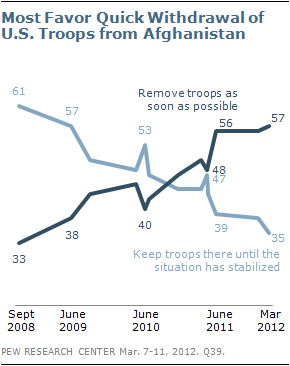 A majority (57%) of Americans favor removing U.S. troops from Afghanistan as soon as possible, while 35% say that U.S. troops should remain until the situation there is stabilized. These opinions are little changed since June 2011, but support for an immediate troop withdrawal continues to be much higher than it was two years ago (40% in June 2010). (Note: This survey was conducted before the killing of 16 Afghanistan civilians by a U.S. Army soldier was reported on March 11.) 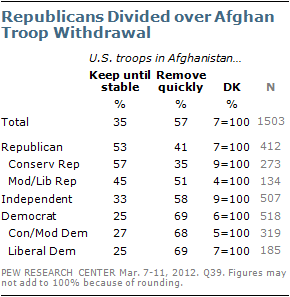 Majorities of Democrats (69%) and independents (58%) continue to favor removing U.S. troops from Afghanistan as soon as possible. About half of Republicans (53%) favor keeping U.S. forces there until the situation is stabilized while 41% support removing the troops as soon as possible. Republican support for maintaining U.S. forces in Afghanistan has remained fairly steady over the past year. As was the case last June, moderate and liberal Republicans are more likely to favor an expeditious troop withdrawal than are conservative Republicans (51% vs. 35%).

A plurality (46%) of Americans believe the level of U.S. support for Israel is about right, with 22% saying the U.S. is too supportive and 20% that it is not supportive enough. But as in past surveys on Israel, there are wide partisan and ideological differences. 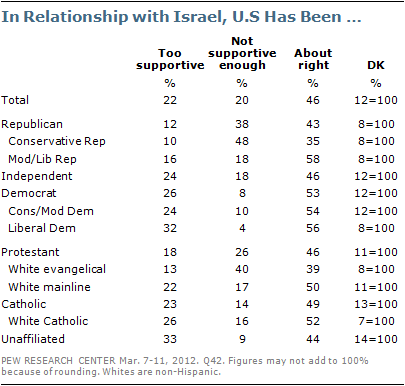 Nearly four-in-ten Republicans (38%) – and 48% of conservative Republicans –say that the United States is not supportive enough of Israel. Among other political groups, no more than about one-in-five say the U.S. is insufficiently supportive.

White evangelical Protestants are far more likely than other religious groups to say that the U.S. has not been supportive enough of Israel. Four-in-ten (40%) say the U.S. is not supportive enough while about as many (39%) say the level of support is about right. Among other religious groups, majorities of pluralities say U.S. support for Israel is about right.

Partisan differences over Israel were evident in a February survey that asked whether the U.S. should support Israel if it decided to attack Iranian nuclear facilities. The possibility of Israel launching such an attack was reported to be a matter of discussion when Obama met with Israeli President Benjamin Netanyahu on March 5.