The Republican nomination battle is rallying Democrats behind Barack Obama. Currently, 49% of Democrats say that as they learn more about the GOP candidates, their impression of Obama is getting better. Just 36% of Democrats expressed this view in December, before the Republican primaries began.

In contrast, there has been virtually no change in Republicans’ views of the GOP field during this period. Just 26% of Republicans say their impression of the GOP field has improved as they have learned more about the candidates. That is largely unchanged from December (30%).

The latest national survey by the Pew Research Center for the People & the Press and The Washington Post, conducted March 1-4 among 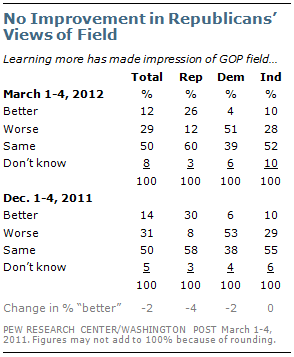 1,009 adults, finds that the overall balance of opinion about the GOP field remains more negative than positive. About three-in-ten (29%) Americans say as they learn more about the field their impression of the Republican candidates has gotten worse, while just 12% say it has gotten better. Half (50%) say their impression has been staying about the same. That is little changed from December.

A Pew Research Center/Washington Post survey in late January found that ratings of the Republican field are lackluster even among Republican and Republican-leaning independent voters: At that time, 52% said the field of candidates was only fair or poor while 46% said it was excellent or good.