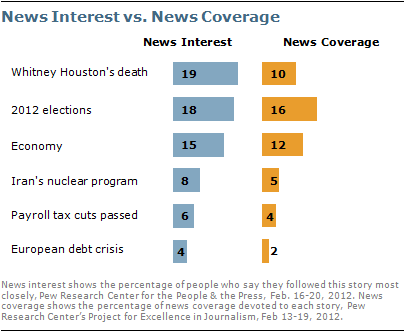 The death of singer Whitney Houston, the presidential campaign and the state of the economy topped the public’s news interest last week.

About two-in-ten (19%) say Houston’s sudden death at 48 was their top story of the week; 18% say they followed news about candidates for the presidential election most closely, while 15% say their top story was news about the economy, according to the latest weekly News Interest Index survey, conducted Feb. 16-20 among 1,006 adults by the Pew Research Center for the People & the Press.

Though a plurality continues to say that Mitt Romney is the Republican candidate they have heard most about in the news recently, Romney and Rick Santorum are about equally visible among 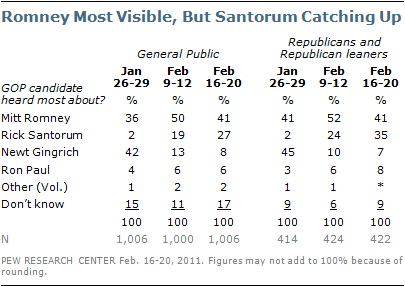 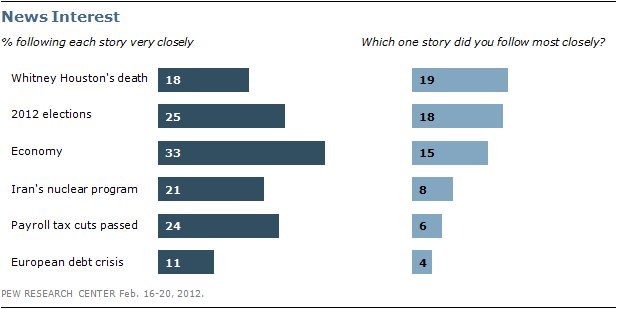 About a quarter of the public (24%) say they very closely followed news about Congress passing legislation to extend payroll tax cuts and unemployment benefits that otherwise would have expired. This was the top story for 6%. News about the legislation accounted for 4% of coverage. Partisans are about equally likely to say they followed last week’s congressional action very closely.

Public attention was greater last summer when lawmakers agreed to raise the federal debt limit. At the start of August, nearly half (46%) said they had closely followed that news.

About two-in-ten (21%) say they very closely followed news about international tensions over Iran’s nuclear program; 8% say this was the news they followed most closely. News about Iran accounted for 5% of coverage.

These findings are based on the most recent installment of the weekly News Interest Index, an ongoing project of the Pew Research Center for the People & the Press. The index, building on the Center’s longstanding research into public attentiveness to major news stories, examines news interest as it relates to the news media’s coverage. The weekly survey is conducted in conjunction with The Project for Excellence in Journalism’s News Coverage Index, which monitors the news reported by major newspaper, television, radio and online news outlets on an ongoing basis. In the most recent week, data relating to news coverage were collected Feb. 13-19, and survey data measuring public interest in the top news stories of the week were collected Feb. 16-20, 2012 from a nationally representative sample of 1,006 adults.