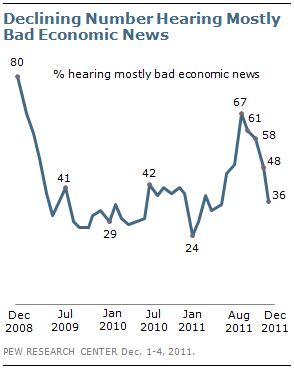 The number of Americans hearing mostly bad news about the economy has fallen 12 points over the past month and 31 points since fears of a new recession intensified in August.

Despite the improving perceptions of economic news, however, somewhat more say they are hearing mostly bad economic news today than did so at the start of the year (24% in January).

The economy was the public’s top story last week, according to the latest News Interest Index survey, conducted Dec. 1-4 among 1,008 adults by Pew Research Center for the People & the Press. Three-in-ten (30%) say they followed news about the economy more closely than any other story. Somewhat fewer (23%) cited the presidential campaign as their top story. 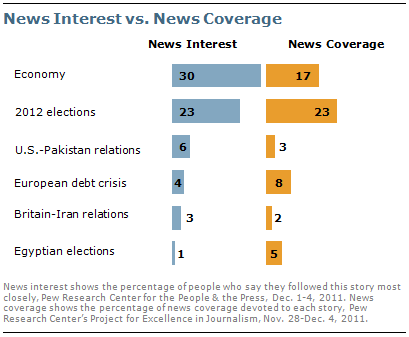 News about the presidential election – much of it focused on the final days of Herman Cain’s bid for the Republican nomination – topped news coverage, accounting for 23% of the newshole. News about the economy made up 17%, according to the Pew Research Center’s Project for Excellence in Journalism (PEJ).

The survey was in the field on Dec. 3 when Cain announced he was suspending his campaign. And, in a week that started with a Georgia woman alleging that she and Cain had had a lengthy affair, Cain was by far the most prominent candidate in the GOP field. 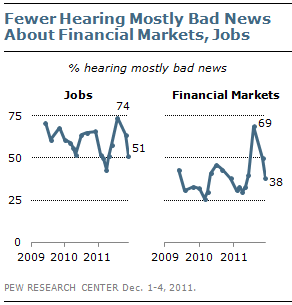 As views of overall economic news have become less negative, perceptions of news from economic sectors have improved as well. Following a week of large stock market gains, about as many say they are hearing mixed news about financial markets (43%) as say they are hearing mostly bad news (38%). Last month, more said the news was mostly bad rather than mixed (by 50% to 41%). In August, more than twice as many were hearing mostly bad news than mixed news (69% vs. 25%). 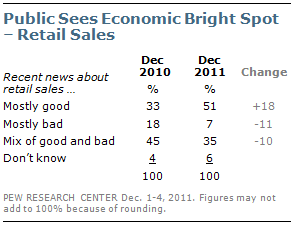 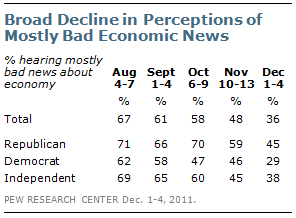 Perceptions of overall economic news, as well as news about jobs, financial markets and retail sales, continue to be divided along partisan lines. Nonetheless, there have been across-the-board declines in the percentages saying they are hearing mostly bad news about the economy. 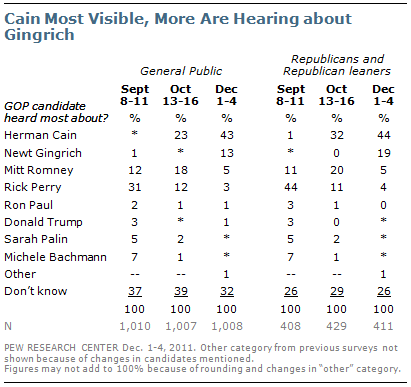 As might be expected, more Americans (43%) say they heard about Herman Cain in the news recently than any other Republican candidate.

By contrast, just 5% of the public – and the same percentage of Republicans and GOP leaners – name Romney as the candidate they are hearing most about. That is down from 18% among the public and 20% among GOP and GOP leaners in October. In a sign of the volatility of the GOP campaign, five different Republican candidates or possible candidates – including Rick Perry, Michele Bachmann and Donald Trump – have led the list of most visible candidates since April.

With Herman Cain’s troubles getting extensive press coverage, most Americans are able to identify him as the candidate accused of sexually harassing several women in the 1990s. In an open-ended question, 60% offer Cain’s name when asked which candidate confronted these allegations.

Fewer are able to connect other GOP candidates to events or news about them that have become part of the campaign. Just more than a third (36%) offer Rick Perry’s name when asked which candidate had a memory lapse during a presidential debate. While some offer other names, most (52%) say they do not know.

About three-in-ten (29%) offer Mitt Romney’s name when asked which candidate has been called a flip-flopper. No other candidate is mentioned by more than 4%. Close to six-in-ten (58%) offer no response.

Just 20% offer Newt Gingrich’s name when asked which candidate had an extensive line of credit at the Tiffany jewelry story. About three-quarters (74%) say they do not know. The credit line briefly became news in May just after Gingrich’s rocky entrance into the GOP race. In awareness of this story, as well as of other campaign events, there are only modest partisan differences.

Four-in-ten (40%) say they followed reports about the condition of the economy very closely last week, a level that has changed little throughout much of 2011. Three-in-ten (30%) say this was the news they followed most closely.

A quarter (25%) say they followed news about the 2012 campaign very closely, about the same level of interest as the previous week; 23% say this was the news they followed most closely.

Just under two-in-ten (18%) say they followed news about the latest conflict betweenthe U.S. and Pakistan very closely. This was the top story for 6% and accounted for 3% of coverage,according to PEJ.

Interest continued to be modest in the economic crisis in Europe; 14% say they followed news about efforts to deal with the debt crisis very closely; 4% say this was the news they followed most closely. News about the situation accounted for 8% of coverage. 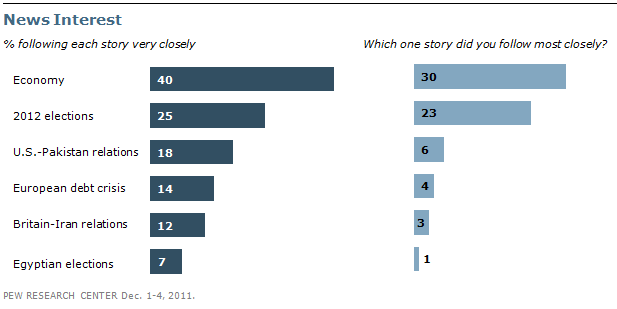 About one-in-ten (12%) say they very closely followed news about tensions between Great Britain and Iran following an attack on the British embassy by Iranian protesters; 3% say this was the news they followed most closely. News about the situation in Iran accounted for 2% of coverage.

These findings are based on the most recent installment of the weekly News Interest Index, an ongoing project of the Pew Research Center for the People & the Press. The index, building on the Center’s longstanding research into public attentiveness to major news stories, examines news interest as it relates to the news media’s coverage. The weekly survey is conducted in conjunction with The Project for Excellence in Journalism’s News Coverage Index, which monitors the news reported by major newspaper, television, radio and online news outlets on an ongoing basis. In the most recent week, data relating to news coverage were collected Nov. 28-Dec. 4, and survey data measuring public interest in the top news stories of the week were collected Dec. 1-4 from a nationally representative sample of 1,008 adults.