Barack Obama was elected president in 2008 in large part because of the overwhelming support he received from young people. And in early 2012 matchups, Obama holds substantial leads among Millennials over both Mitt Romney and Rick Perry. However, since early in his presidency, Obama’s job approval rating has fallen substantially across all age cohorts, Millennials included. 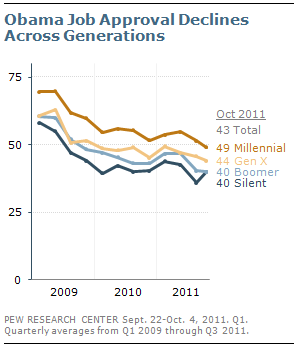 Only about half of Millennials (49%) approve of the way Obama is handling his job as president, down 24 points from February 2009. Obama’s job approval is little different among Gen Xers (44% approve), and somewhat lower among Boomers and Silents (40% each).

Throughout much of his presidency, Obama’s job rating has been higher among Millennials than among older age cohorts. In February 2009, shortly after he took office, 73% of Millennials, 63% of Boomers, and 62% each of Gen Xers and the Silent Generation approved of the way Obama was handling his job as president. 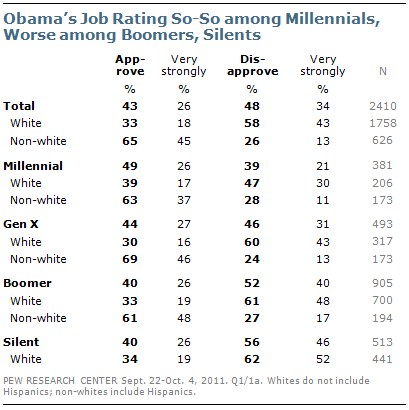 Age and race are factors in the positive opinion of Obama among Millennials. Non-whites generally are much more approving of Obama’s job performance than are whites and Millennials are by far the most racially and ethnically diverse age cohort. In addition, white Millennials have less negative views of Obama than do older whites.

There is little difference in views of Obama among non-white Millennials, Gen Xers and Boomers. About six-in-ten or more in all three cohorts approve of his job performance. And substantially more in each age cohort strongly approve than disapprove of the way Obama is handling his job. Among the predominantly white Silents, there are too few non-whites to analyze. 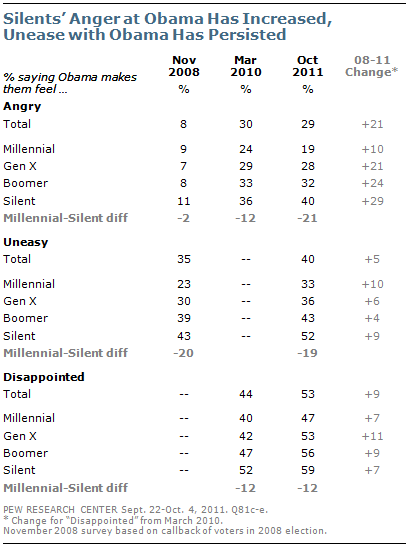 There are sharp generational differences in negative personal reactions toward Obama, particularly when it comes to feelings of anger and unease. Overall, when asked if Obama makes them feel angry, 29% say yes while 70% say no. Four-in-ten (40%) say Obama makes them feel uneasy, while 53% say they have been disappointed by Obama.

Silents are more likely than those in younger age cohorts to say that Obama makes them feel angry: 40% of Silents say Obama makes them feel this way, compared with 32% of Boomers, 28% of Gen Xers and just 19% of Millennials. In a callback survey of voters shortly after the 2008 presidential election, just 11% of Silents, and comparable percentages of voters in other age cohorts, said Obama made them feel angry.

Even in the afterglow of Obama’s victory, Silents and Boomers were more likely than Gen Xers or Millennials to express unease with Obama, and these differences have persisted. In the current survey, Silents are the only age cohort in which a majority (52%) says Obama makes them feel uneasy; 43% of Boomers, 36% of Gen Xers and 33% of Millennials say Obama makes them feel uneasy.

Overall, there are more modest generational differences in views of whether people feel disappointed by Obama: 59% of Silents express this view, as do 56% of Boomers, 53% of Gen Xers and 47% of Millennials. 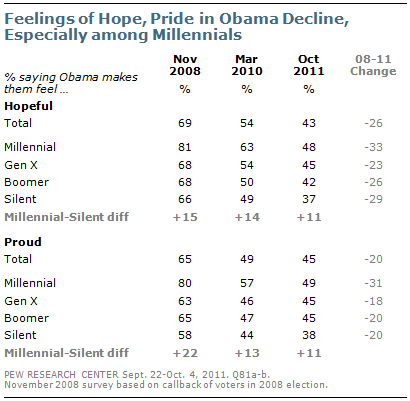 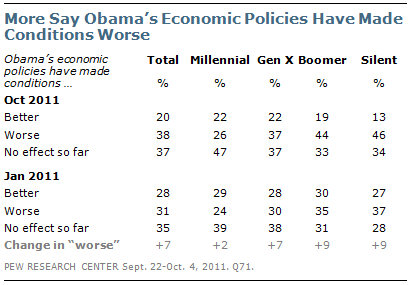 The balance of opinion among Silents, already tilting negative at the start of the year, has grown more so. Millennials, however, continue to express mixed views of the impact of Obama’s economic policies: 26% say his policies have made conditions worse, the lowest percentage of any age cohort, while 22% say they have made conditions better.

Views of the Political Parties 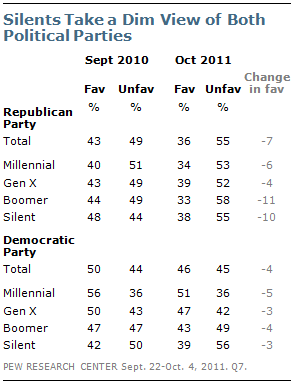 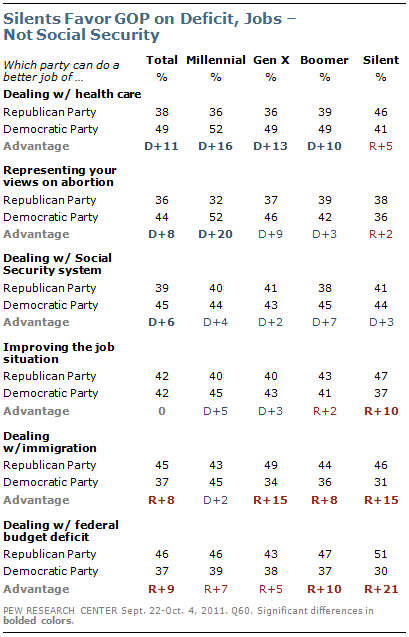 While most Silents view the GOP unfavorably, they prefer the Republicans on several key issues. By 51% to 30%, more Silents say Republicans can better handle the budget deficit than Democrats; Silents also favor the GOP on immigration (by 15 points) and improving the job situation (10 points).

But Silents are divided over which party can better handle health care, abortion and Social Security. More than four-in-ten (44%) say the Democratic Party can do a better job in dealing with the Social Security system while about the same percentage (41%) favors the Republicans.

Millennials have a much more favorable opinion of the Democratic Party than the Republican Party, but they clearly prefer the Democrats on only two issues – representing their views on abortion (by 52% to 32%) and dealing with health care (52% to 36%). Millennials are split over which party can better deal with the Social Security system, improve the job situation, deal with immigration and deal with the federal budget deficit.

Boomers are conflicted in evaluating which party can better handle major issues. By 49% to 39%, more Boomers say the Democratic Party can do better on health care. Boomers also prefer the Democrats on Social Security (45% to 38%). Notably, older Boomers – those ages 56 to 65 – favor the Democrats on Social Security by 13 points (48% to 35%), while younger Boomers (ages 47 to 55) are divided over which party can better handle this issue. By contrast, Boomers are more likely to say that Republicans can do a better job than Democrats dealing with the federal deficit (47% vs. 37%) and dealing with immigration (44% vs. 36%). 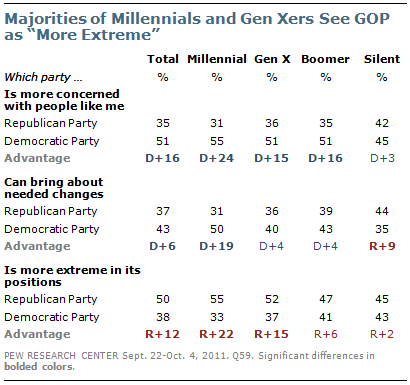 By 50% to 31%, Millennials see the Democrats as better able to bring about the kind of changes the country needs. By contrast, slightly more Silents say the GOP can bring about needed changes (44% to 35%). Gen Xers and Boomers are split over which party can better bring needed change.

Roughly half of Millennials (55%) and Gen Xers (52%) view the Republican Party as “more extreme in its positions,” and 47% of Boomers agree. About as many Silents see the Democrats (43%) as the Republicans (45%) as having more extreme positions.

How Generations View the Tea Party 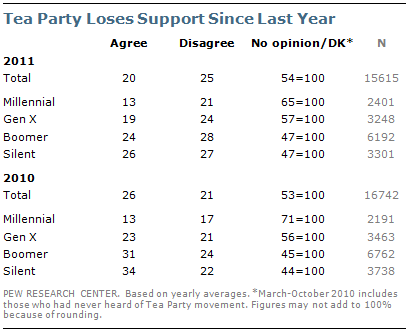 In 2010, Boomers and Silents, on balance, were more likely to say they agreed than disagreed with the Tea Party movement. But that is no longer the case.

Among Boomers, the balance among those who offer an opinion has shifted from positive to negative. In 2010, 31% of Boomers said they agreed with the new movement, while 24% said they disagreed; 45% offered no opinion. This year, 24% agree, 28% disagree and 47% offer no opinion.

Opinion among Gen Xers also has turned more negative. In 2010, 23% said they agreed with the Tea Party, while 21% disagreed. In 2011, 19% say they agree with the movement, while 24% disagree. In both years, almost six-in-ten offered no opinion.

Next: Section 4: Views of the Nation
← Prev Page
Page1Page2Page3You are reading page4Page5Page6Page7Page8Page9Page10
Next Page →