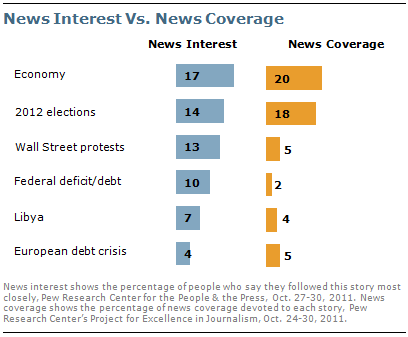 No single story dominated Americans’ attention. Nearly two-in-ten (17%) say reports about the condition of the economy was their top story, while 14% cite news about the candidates for president in 2012 as the story they followed most closely.

Another 13% cite the anti-Wall Street protests in New York and other cities, while 10% cite the discussions in Washington about how to address the federal budget deficit and the national debt.

According to the latest weekly News Interest Index survey, conducted Oct. 27-30 among 1,002 adults by the Pew Research Center for the People & the Press, fewer say their top story was either the events unfolding in Libya (7%) or efforts by European nations to deal with the debt crisis in Greece (4%), another major economic story.

About four-in-ten (38%) say they followed reports about the condition of the U.S. economy very closely last week. That is unchanged from one week earlier and consistent with strong interest in economic news throughout this year, first as the recovery struggled to take hold and then when it become clear the recovery had stalled.
By this measure, partisans show comparable levels of interest: 42% of Democrats, 37% of Republicans and 37% of independents say they followed news about the economy very closely. 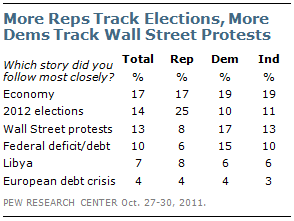 The partisan divide is larger when people are asked which story they followed most closely. A quarter of Republicans (25%) – more than for any other story – say this was their top news of the week. Another 17% say the economy was the story they followed most closely. This marks the third week in a row that the campaign has been the top story for Republicans.

About as many Democrats (19%) as Republicans say the economy was their top story, but just 10% say they followed election news most closely.

Democrats show greater interest than Republicans in the anti-Wall Street protests in New York and other cities. Nearly two-in-ten Democrats (17%) say news about the protests was their top story, compared with 8% of Republicans. Independents fall in between (13%).

Overall, 19% of the public say they followed the protests very closely, matching the number that said this one week earlier. Slightly more Democrats say this than Republicans (21% vs. 14%). News about the protests – which last week included confrontations with police in Oakland and Atlanta – accounted for 5% of the newshole. That’s down from the week of Oct. 10-16, when the story accounted for 10% of coverage.

Democrats also are more likely than Republicans to say their top story last week was the debt and deficit deliberations in Washington; 15% of Democrats say this was the news they followed most closely, compared with 6% of Republicans. One-in-ten independents (10%) say this as well. However, partisans are about equally likely to say they followed this news very closely (28% of Republicans, 27% of Democrats and 24% of independents). 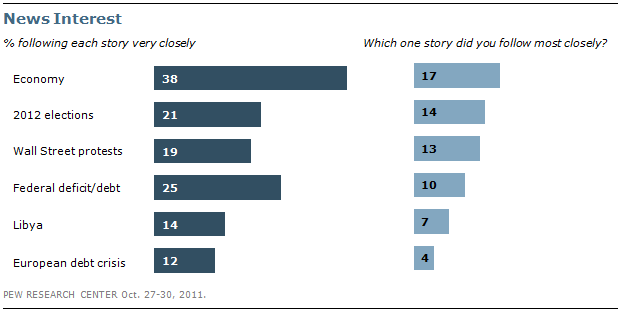 The top foreign stories attracted less interest. Overall, 7% say their top story was the situation in Libya after the death of that country’s ousted leader, Moammar Gadhafi; 14% say they followed this news very closely. On both measures, there is little difference among partisans. News about Libya accounted for 4% of coverage, down sharply from 17% one week earlier when Gadhafi was captured and killed.

Interest in the ongoing financial crisis in Europe remains limited. Just 4% say the efforts to deal with the debt crisis in Greece and other European countries was their top story; 12% say they followed this news very closely. Partisans showed comparable interest on both measures. News about the debt crisis accounted for 5% of coverage.

These findings are based on the most recent installment of the weekly News Interest Index, an ongoing project of the Pew Research Center for the People & the Press. The index, building on the Center’s longstanding research into public attentiveness to major news stories, examines news interest as it relates to the news media’s coverage. The weekly survey is conducted in conjunction with The Project for Excellence in Journalism’s News Coverage Index, which monitors the news reported by major newspaper, television, radio and online news outlets on an ongoing basis. In the most recent week, data relating to news coverage were collected Oct. 24-30, and survey data measuring public interest in the top news stories of the week were collected Oct. 27-30 from a nationally representative sample of 1,002 adults.