The Tea Party has emerged as a political force on domestic issues, especially the national debt and the size and role of the federal government. Republican supporters of the Tea Party movement also have a distinct approach to national security and America’s role in the world. Tea Party Republicans favor an assertive foreign policy, are strong supporters of Israel and take a hard line against illegal immigration, according to surveys conducted this year by the Pew Research Center for the People & the Press: 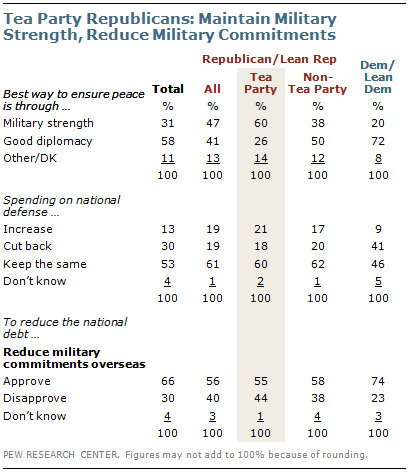 Among all Republicans and Republican-leaning independents, 40% agree with the Tea Party movement. For more on the demographics of GOP Tea Party supporters see “Obama Loses Ground in 2012 Reelection Bid,” July 28, 2011.

Yet a majority of Tea Party Republicans and Republican leaners (55%) also approve of reducing military commitments overseas to reduce the budget deficit and the size of the nation’s debt. On this issue, their opinions differ little from Republicans and leaners who do not agree with the Tea Party movement (58%). Among Democrats and Democratic leaning independents, 74% approve of cutting back on military commitments to reduce the national debt. 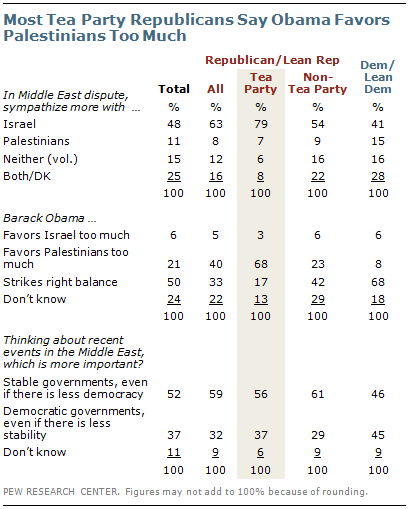 There has been greater partisan agreement in opinions about the political changes that are affecting many countries in the Middle East. In early March, amid pro-democracy protests in several Middle Eastern countries and shortly after Hosni Mubarak stepped down as Egypt’s president, 52% of the public said it was more important to have stable governments in the Middle East, even if there were less democracy; 37% said democratic governments are more important even if there were less democracy. 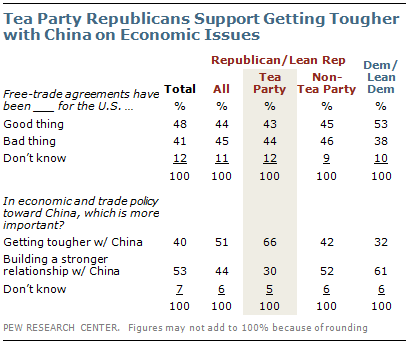 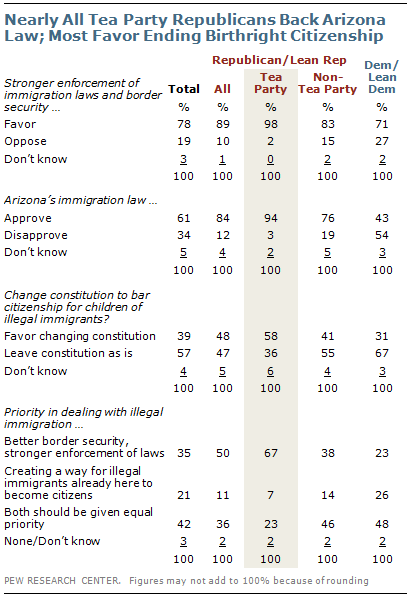 Nearly as many (94%) favor Arizona’s tough immigration law, which is tied up in court. The law requires police to verify the legal status of someone they have already stopped or arrested if they suspect that the person is in the country illegally.
Nearly six-in-ten Tea Party Republicans (58%) favor changing the constitution to bar citizenship for children born in the United States to illegal immigrants. Majorities of Democrats (67%) and non-Tea Party Republicans (55%) oppose changing the constitution for this purpose.

The public generally supports a two-fold approach to illegal immigration: a 42% plurality says the priority should be both better border security and stronger enforcement of immigration laws and creating a way for illegal immigrants who are already here to become citizens if they meet certain requirements. Nearly half of Democrats (48%) and non-Tea Party Republicans (46%) say that better border security and finding a way for people here illegally should be given equal priority.

But a substantial majority of Tea Party Republicans (67%) say better border security and stronger enforcement of existing laws should be the primary priority; just 23% favor a dual focus, with equal priority given to tougher security measures and a path to citizenship.

Afghanistan: Support for Troop Presence, Doubts about the Future

In June, shortly before President Obama announced his timetable for withdrawing U.S. troops from Afghanistan, a majority of Tea Party Republicans (55%) favored maintaining U.S. troops in the country until the situation has stabilized. 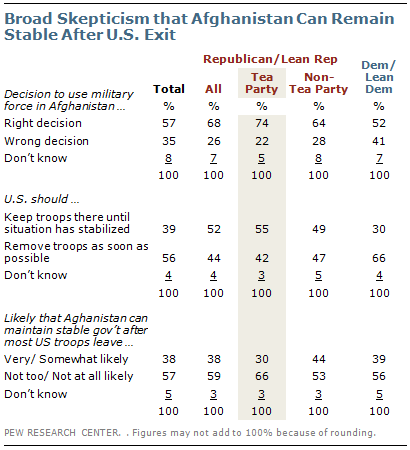 Across the political spectrum, there was little optimism that Afghanistan can maintain a stable government after most U.S. troops leave the country.

After Obama’s announcement, the Pew Research Center and The Washington Post conducted a survey about the pace of troop withdrawal from Afghanistan. A plurality of Americans (44%) said Obama was handling the withdrawal of combat troops from Afghanistan about right, while 29% said he was not removing them quickly enough, and 14% thought he was removing them too quickly.

The survey had no measure of Tea Party support, but Republicans generally were divided over Obama’s plan for drawing down U.S. forces: 32% said Obama was not removing the troops quickly enough, 28% said he was removing them too quickly, and 25% said he was handling this about right.

Much of the data in this report came from Pew Research’s political typology, which sorts Americans into cohesive groups based on values, political beliefs, and party affiliation. For more, see “Beyond Red vs. Blue: The Political Typology” May 4, 2011.