Major events in the Middle East –including tensions between the U.S. and Israel, growing political unrest in many Arab countries, and the death of Osama bin Laden – have had little effect on public attitudes toward the region.

Regarding the Israeli-Palestinian dispute, far more Americans continue to say they sympathize with Israel rather than the Palestinians (by 48% to 11%). These opinions are little changed from recent years.

The latest national survey by the Pew Research Center for the People & the Press, conducted May 25-30 among 1,509 adults, finds that the public continues to cast a wary eye on the turmoil sweeping the Middle East. 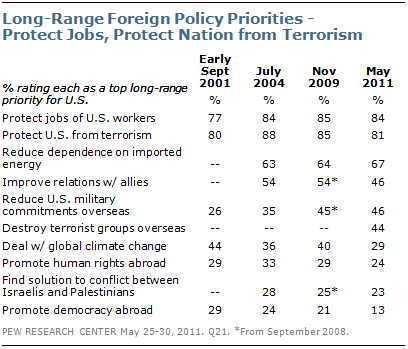 The survey also finds few changes in the public’s overall foreign policy goals. As in the past, protecting the jobs of American workers and taking measures to protect the United States against terrorism are cited by substantial majorities as top long-range policy priorities; 84% say protecting U.S. jobs should be a top priority and 81% say the same about protecting the U.S. against terrorism.

Consistent with other trend measures about dealing with global climate change, the percentage rating this objective as a top foreign policy priority has declined since 2009 (from 40% to 29%). And the goal of promoting democracy abroad – which was not widely viewed as a top priority even when former President Bush made it a centerpiece of his administration’s foreign policy – draws even less support today. Just 13% say promoting democracy abroad should be a top priority, down from 21% two years ago and 24% in 2004.

More generally, the public continues to express reservations about the United States taking an active role in the world. A separate survey, conducted May 26-29, finds a nearly even division of opinion over whether the U.S. should “mind its own business internationally” – 46% say that it should, while 50% disagree.

These opinions are little changed since the Pew Research Center’s major foreign policy study –America’s Place in the World – was conducted in the fall of 2009. At that time, 49% agreed that the U.S. should mind its own business internationally and 44% disagreed. 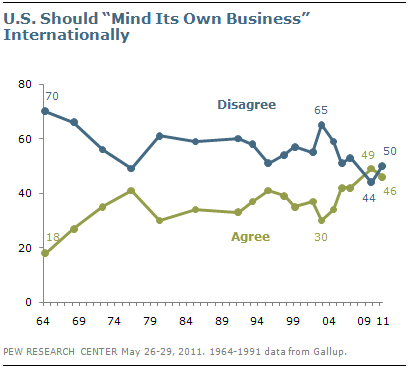 Nonetheless, the current measure of isolationist sentiment is among the highest recorded in the more than half-century that the Pew Research Center and Gallup Org. have been tracking this question. In August 2004, just 34% said the U.S. should mind its own business internationally and in December 2002 just 30% expressed this sentiment.

There are other indications of the public’s reticence about U.S. global engagement. Fully 77% say that it is more important for President Obama to focus on domestic policy compared with just 9% who say Obama should focus more on foreign policy. This is little changed from January, but far higher than the percentage that said Bush should focus more on domestic policy than at any point during his presidency.

And in a report released on June 7, 65% approved of reducing overseas military commitments as a way to cut the budget deficit. Majorities of independents (72%), Democrats (63%) and Republicans (56%) approve of this proposal. (See “More Blame Wars than Domestic Spending or Tax Cuts for Nation’s Debt,” June 7, 2011.) 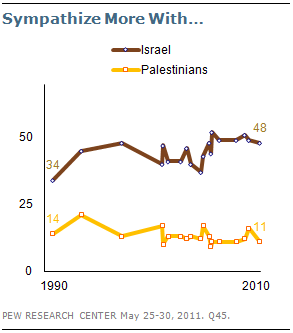 There continue to be substantial partisan, ideological and religious differences in views of the Israel-Palestinian dispute. Fully 75% of conservative Republicans sympathize more with Israel – by far the highest percentage of any partisan group. At the other end of the 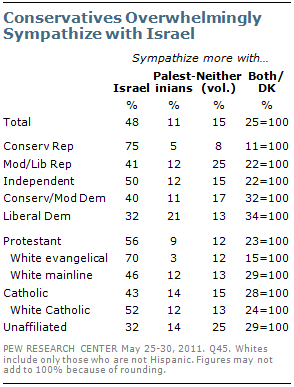 Members of other religious groups also side with Israel by less lopsided margins. About half of white Catholics (52%) sympathize more with Israel, as do 46% of white mainline Protestants; just 12% in each group sympathizes more the with Palestinians.

Tensions between the United States and Israel rose last month after Obama called for Israel and the Palestinians to negotiate a two-state solution based on 1967 borders. But there is 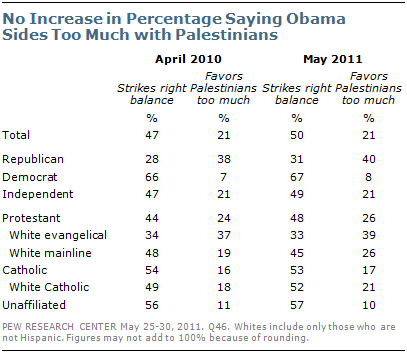 no evidence that the flap is affecting public views of Obama’s handling of the situation.

Far more Americans say Obama is striking the right balance in the Middle East (50%) than say he favors the Palestinians too much (21%). Just 6% say he favors Israel too much. These opinions are virtually unchanged from April 2010.

Even among Republicans and white evangelicals – who already were more likely to say that Obama tilts too much toward the Palestinians – there has been no significant increase in the percentages expressing this view since last year.

No Consensus about Impact of Middle East Upheaval

There continues to be no public consensus about what the protests and calls for change in the Middle East will mean for the people in the region, or for the United States. Slightly more say the upheaval affecting the Middle East will not lead to lasting improvements for the region’s peoples than say it will (45% vs. 37%). In early April, opinion on this issue was evenly divided (43% will not lead to improvements, 42% will lead to improvements).

Republicans continue to be far more pessimistic than Democrats about the likely impact of changes in the region. Only about a quarter of Republicans (24%) say the changes sweeping the region will lead to lasting improvements for 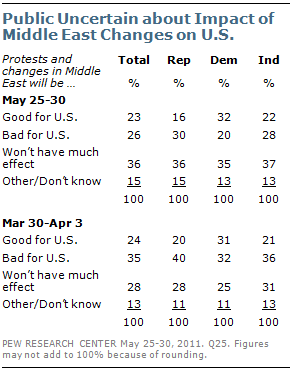 its people; nearly twice as many Democrats (46%) express this view. Four-in-ten independents (40%) say the changes will result in lasting improvements for people in the Middle East.

Republicans also take a more negative view of what the changes in the region will mean for the United States: just 16% say they will be good for the U.S. compared with 32% of Democrats.

There is broad partisan agreement about what the country’s top long-term foreign policy objectives should be: Protecting the jobs of American workers and protecting the country from terrorist attacks rank highest for Republicans, Democrats and independents alike. Protecting U.S. jobs is seen as a top priority by more than eight-in-ten Republicans (85%), Democrats (87%) and independents (81%); taking measures to protect the U.S. from terrorist attacks ranks similarly high. 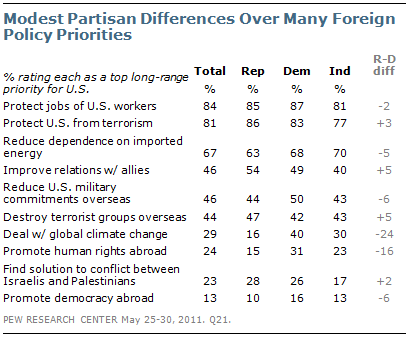 Smaller majorities of all three groups also prioritize reducing American dependence on foreign energy sources. And about half of Republicans, Democrats and independents say that improving relationships with our allies should be a top policy priority.

Far more Americans rate protecting the U.S. from terrorism as a top priority than say that about destroying terrorist groups overseas (84% vs. 44%). There are virtually no partisan differences in views of the importance of destroying overseas terrorist groups – 47% of Republicans rate this as a top priority as do 43% of independents and 42% of Democrats.

This is consistent with findings from the Pew Research Center’s political typology, released May 4. The typology found that partisan differences in opinions about foreign assertiveness, which largely distinguished Republicans from Democrats during the Bush administration, have decreased as foreign policy issues have declined in importance.

Finding a solution to the Israeli-Palestinian conflict is a top priority for just 23% of the public, and Republicans (28%) and Democrats (26%) are about equally likely to say it should be (independents are less likely than either partisan groups to view this as a top priority). All three groups are in agreement that promoting democracy in other nations ranks as the lowest priority of the ten listed. Just 10% of Republicans, 16% of Democrats and 13% of independents say promoting democracy abroad should be a top priority. 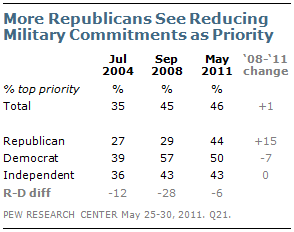 No Partisan Gap in Views of Global Engagement

As was the case in 2009, the public is divided about whether the United States should scale back its international involvement. 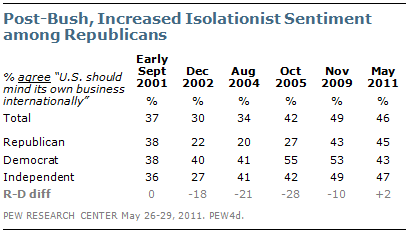 Currently, 46% agree with the statement “The U.S. should mind its own business internationally and let other countries get along the best they can on their own.” Half (50%) disagree with that statement.

By contrast, the proportion of Democrats who say the U.S. should mind its own business internationally has fallen. Currently, 43% agree, down from 53% in 2009 and 55% in 2005. As a result, for the first time in a decade there is no partisan gap in isolationist sentiment.

Fewer Say U.S. Should Go Its Own Way 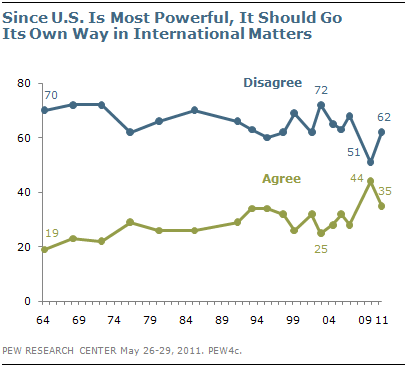 Two years ago, Pew Research Center also found an increase in the proportion of Americans who agreed that “since the U.S. is the most powerful nation in the world, we should go our own way in international matters, not worrying too much about whether other countries agree with us or not.” The percentage agreeing jumped to 44%, from just 28% in 2006.

But in the new survey, the number saying the U.S. should go its own way in the world has fallen back to 35%, which is 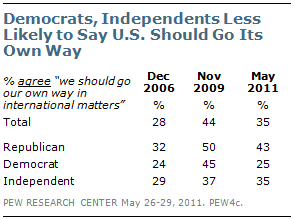 Democrats are less likely to agree that the U.S. should go its own way internationally: 25% of Democrats favor this approach, down from 45% in 2009. By contrast, there has been little change in these opinions among both independents and Republicans.

Continued Division over Cooperating with U.N. 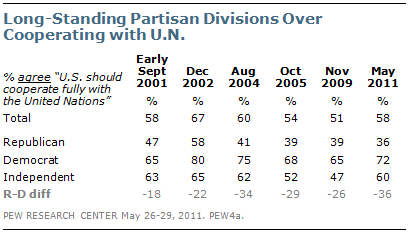 In the new survey, twice as many Democrats as Republicans say the United States should cooperate fully with the United Nations (72% vs. 36%). These opinions are little changed from 2009. Independents are much more likely to favor full cooperation with the U.N. than they were two years ago (60% today, 47% then).

Republicans have long been more skeptical of the U.N. than either Democrats or independents. Only once in the past decade – in December 2002 – has a majority of Republicans (58%) agreed that the U.S. should cooperate fully with the U.N. In that survey, even higher percentages of Democrats (80%) and independents (65%) favored full cooperation with the U.N.