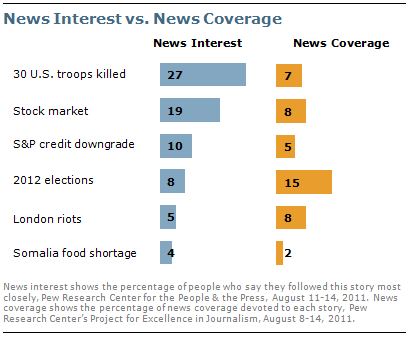 News about the crash of a military helicopter in Afghanistan that killed 30 Americans last week refocused public attention on the long-running war there.

About a quarter of the public (27%) says they followed news about the troop deaths in Afghanistan – which included members of the elite force that killed Osama bin Laden – more closely than any other news last week, according to the latest weekly News Interest Index survey by the Pew Research Center for the People & the Press, conducted Aug. 11-14 among 1,005 adults.

Economic story lines also captured the public’s attention. About two-in-ten (19%) say they followed news about the ups and downs in the stock market most closely, while another 10% say news about the downgrade in the government’s credit rating was their top story.

Together, the economic stories garnered significantly more coverage than the helicopter crash. News about Afghanistan accounted for 7% of coverage, according to the Pew Research Center’s Project for Excellence in Journalism (PEJ). News about the economy made up 32% of coverage; 8% of the total dealt with the dramatic swings in world stock markets, 5%% dealt specifically with Standard & Poor’s decision to downgrade the U.S. credit rating and the remainder dealt with the economy’s troubles more generally. 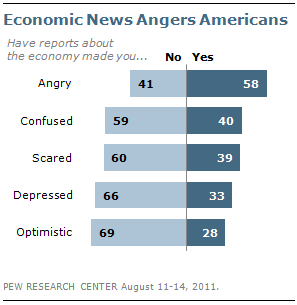 Nearly six-in-ten Americans (58%) say reports about the economy make them feel angry, higher than the 49% that said this in November 2008 as the economic crisis worsened. Much larger numbers of independents and Republicans say this than in 2008; the percentage of Democrats who feel this way is largely unchanged.

In recent years, the public has paid relatively modest but steady attention to developments in the long-running war in Afghanistan. Between 20 and 30 percent typically say they are following news about Afghanistan very closely. However, interest tends to spike at critical points, such as last week’s deadly downing of a Chinook helicopter by Taliban forces.

About four-in-ten (39%) say they very closely followed news about the 30 Americans killed in the helicopter attack. That is the highest level of interest in news about Afghanistan since President Obama announced in late 2009 that he would boost troop levels there and then start a drawdown in 2011.

Comparable numbers of Republicans (42%), Democrats (37%) and independents (40%) say they followed news about last week’s deaths very closely. There also is little difference in attentiveness based on gender, education or household income level.

About three-in-ten each say they very closely followed news about recent ups and downs in the stock market (32%) and S&P credit rating downgrade (31%). Partisans are about equally likely to say they followed both stories very closely. 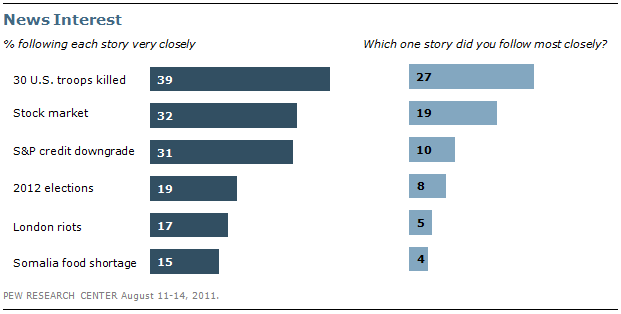 About two-in-ten (19%) say they followed news about candidates for 2012 presidential election very closely. That is little changed from recent weeks despite increased coverage as the Iowa straw poll approached and Texas Gov. Rick Perry prepared to enter the race. Fewer than one-in-ten (8%) cited campaign news as their top story. There are only slight partisan differences in attentiveness to news about the 2012 candidates. News about the candidates accounted for 15% of coverage, up sharply from 2% the previous week.

The riots in London and other parts of Great Britain attracted modest attention, with 17% saying they followed this news very closely and 5% saying this was the news they followed most closely. The unrest accounted for 8% of coverage.

About six-in-ten (58%) say that when they hear news about the economy, it makes them angry. That’s up from 49% in mid-November 2008, as the economic downturn worsened and shortly after Barack Obama won the presidential election.

Six-in-ten Republicans (61%) say news about the economy makes them angry, up 12 points from when the question was asked in late 2008. That jumps to 72% among Republicans and Republican-leaning independents who agree with the Tea Party. 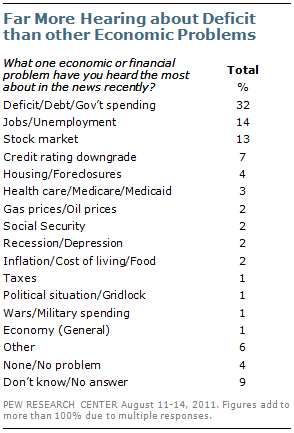 Though the stock market gyrations and the government credit rating were major stories last week, the standoff in Washington over the national deficit and the debt limit dominated media coverage for much of the past month. In the week leading up to a possible government default on Aug. 2, the debate accounted for almost half of news coverage (47%).

The poll finds few differences among Republicans, Democrats and independents on this question. A third or more in each group mentions the federal budget deficit as the problem that have the most about recently. Far more Republicans and GOP leaners who agree with the Tea Party say they have heard the most about the deficit recently than those who do not agree with the movement (54% vs. 29%).

These findings are based on the most recent installment of the weekly News Interest Index, an ongoing project of the Pew Research Center for the People & the Press. The index, building on the Center’s longstanding research into public attentiveness to major news stories, examines news interest as it relates to the news media’s coverage. The weekly survey is conducted in conjunction with The Project for Excellence in Journalism’s News Coverage Index, which monitors the news reported by major newspaper, television, radio and online news outlets on an ongoing basis. In the most recent week, data relating to news coverage were collected August 8-14, and survey data measuring public interest in the top news stories of the week were collected August 11-14 from a nationally representative sample of 1,005 adults.