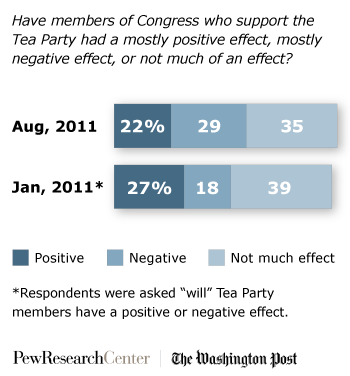 More Americans now think that members of Congress who support the Tea Party are having a negative effect than said that in January, at the start of the new Congress. Currently, 29% judge the impact of Tea Party supporters as mostly negative compared with 22% who see their impact as mostly positive. At the beginning of the year, the balance of opinion was just the opposite: 27% said that Tea Party members in Congress would have a positive impact, while 18% expected a negative effect. 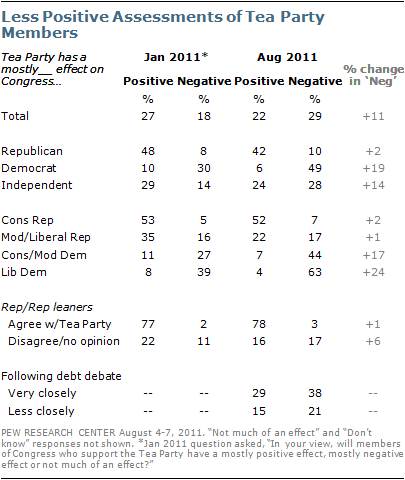 The latest survey by the Pew Research Center for the People & the Press and The Washington Post, conducted August 4-7, 2011 among 1,001 adults, finds that views of Tea Party members fall along partisan and ideological lines.

The balance of opinion has changed the most among political independents. In January, by a margin of 29% to 14% independents expected that Tea Party members would have a positive effect. Currently, about as many independents say Tea Party members in Congress are having a negative effect (28%) as a positive effect (24%). The new poll also finds that those who followed the debt ceiling debate very closely have more negative views about the impact of the Tea Party than those who followed the issue less closely.