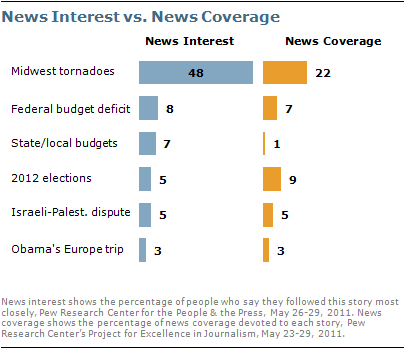 The devastating tornadoes that ripped through the Midwest last week dominated the public’s news interest and received much more coverage than any other story.

About half of the public (48%) says they followed news about the powerful tornadoes that struck Joplin, Mo., more closely than any other news last week. None of the week’s other top stories comes close, according to the latest weekly News Interest Index survey conducted May 26-29 among 1,000 adults by the Pew Research Center for the People & the Press.

A Year of Major Breaking Stories

The public showed only modest interest in the week’s other top stories, continuing a trend seen throughout much of 2011. A series of major breaking news stories – including the shootings in Tucson, the upheaval in the Middle East, the disasters in Japan and the killing of Osama bin Laden – has dominated the news agenda for both the media and the public this year. And that has routinely resulted in less public attention to other news, such as the debate in Washington over how to address the federal deficit and long-term debt and the early stages of the 2012 presidential campaign. 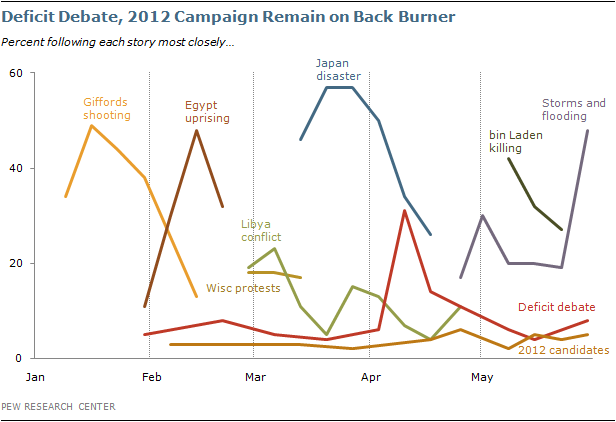 A quarter of the public (25%) says they very closely followed the ongoing discussions in Washington last week over how to handle the federal budget deficit and reduce the national debt; just 8% say this was the news they followed most closely. The only week this year when the deficit debate drew substantial public interest was in early April, when a government shutdown loomed. In the April 7-10 News Interest survey, 47% followed news about the threat of a shutdown very closely and 31% followed this story most closely.

Two-in-ten say they followed news about the 2012 presidential campaign very closely last week, up slightly from a week earlier (15%) and matching the high for the year hit in mid-April. Still, just 5% say this was the news they followed most closely. News about the campaign, focused on the potential Republican candidates, made up 9% of coverage. 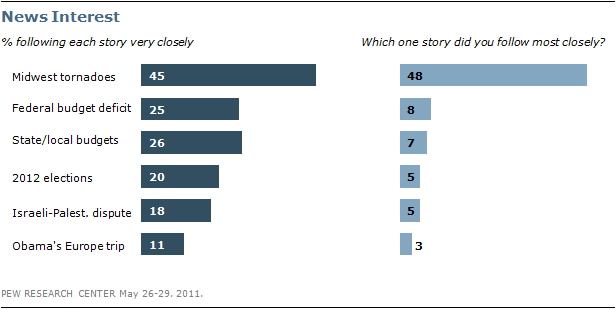 Meanwhile, about one-in-ten (11%) say they followed news about Obama’s trip to Europe last week very closely. Just 3% say this was the news they followed most closely. The president’s trip made up 3% of coverage.

Most Aware of Oprah’s Final Show 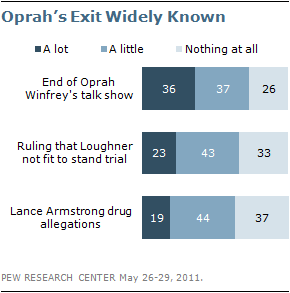 These findings are based on the most recent installment of the weekly News Interest Index, an ongoing project of the Pew Research Center for the People & the Press. The index, building on the Center’s longstanding research into public attentiveness to major news stories, examines news interest as it relates to the news media’s coverage. The weekly survey is conducted in conjunction with The Project for Excellence in Journalism’s News Coverage Index, which monitors the news reported by major newspaper, television, radio and online news outlets on an ongoing basis. In the most recent week, data relating to news coverage were collected May 23-29, and survey data measuring public interest in the top news stories of the week were collected May 26-29, from a nationally representative sample of 1,000 adults.