The new political typology provides further evidence of deep and enduring partisan divisions over political attitudes and preferences. Yet an analysis of the typology groups’ fundamental political values also shows significant cleavages within both parties’ core groups and their broader coalitions over attitudes toward business, immigration, religion, the environment and other issues.

Looking at the broad Republican coalition, the core GOP groups and Republican-oriented independent groups are strongly critical of government. But the core Republican groups – Staunch Conservatives and Main Street Republicans – differ sharply in their opinions about business, the environment and foreign assertiveness. Republican-leaning Libertarians hold much more tolerant views on immigration and homosexuality, while Disaffecteds stand out for their support for government aid to the poor. 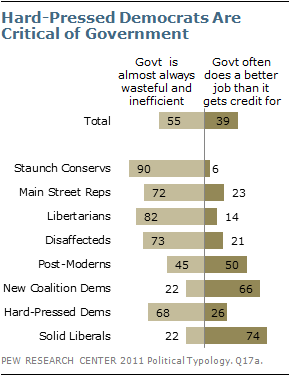 On the Democratic side, Solid Liberals and Post-Moderns are less religious than the Hard-Pressed and New Coalition Democrats and are more accepting of homosexuality. Hard-Pressed Democrats stand out for their critical views of government and negative attitudes about immigrants. The Democratic-leaning Post-Moderns are far less supportive of government help for the poor and of making more changes to give blacks equal rights with whites. 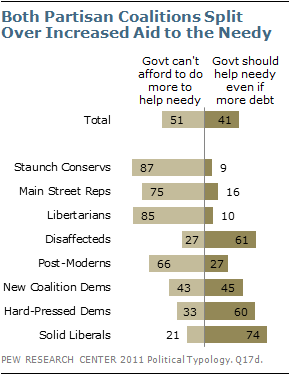 All four groups in the broad GOP coalition express overwhelmingly negative opinions about government performance. While the Republican groups agree on the government’s performance, they differ over government’s role – specifically when it comes to aiding the poor and needy. On this issue, the Disaffecteds – by far the lowest-income group in the GOP coalition – break with other Republican and Republican-oriented groups.

Moreover, Post-Moderns are the only group within the broad Democratic coalition in which a majority (54%) thinks that poor people today have it easy because they can get government benefits without doing anything in return. And just as Disaffecteds break from other groups in the Republican coalition in their support for increased aid to the needy, so too do they diverge in their view of the poor’s reliance on the government. Large majorities in the two core Republican groups, as well as among the GOP-leaning Libertarians, say the poor have it easy, but just 22% of Disaffecteds agree. 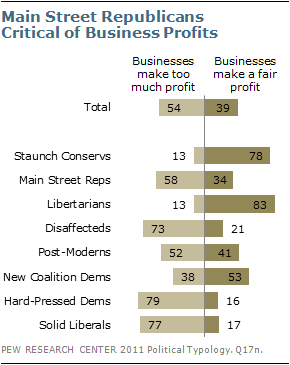 Solid Liberals and Hard-Pressed Democrats overwhelmingly say that business corporations make too much profit. On the right, large proportions of Staunch Conservatives and Libertarians disagree.

New Coalition Democrats differ with other Democratic groups in opinions about corporate profits. A majority (53%) says corporations make a fair and reasonable amount of profit, while 38% say profits are too high. 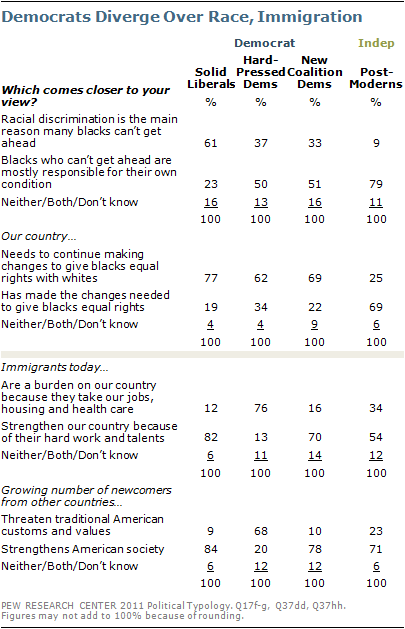 The Democratic coalition is deeply divided over political values relating to race. Solid Liberals and Post-Moderns – both mostly white and relatively upscale – have very different attitudes about the factors limiting black progress and whether further efforts are needed to achieve racial equality.

Most Solid Liberals (61%) say that racial discrimination is the main reason why many black people can’t get ahead these days; they are the only typology group in which a majority expresses this view.

By contrast, Post-Moderns overwhelmingly reject the idea that racial discrimination is the main barrier to black progress (just 9% say this). Nearly eight-in-ten (79%) say that blacks who can’t get ahead in this country are mostly responsible for their own condition. On this measure, the opinions of Post-Moderns are close to those of the four groups in the GOP coalition, where majorities say that blacks who cannot get ahead are responsible for their own condition.

Hard-Pressed Democrats and New Coalition Democrats also say on balance that blacks who are unable to get ahead are responsible for their fate. About half in each group expresses this view, while fewer think racial discrimination is the biggest reason that many blacks cannot get ahead.

Post-Moderns are the only group in the Democratic coalition who reject the idea that the country needs to continue making changes to give blacks equal rights with whites. Nearly seven-in-ten Post-Moderns (69%) say the country has made the changes needed to give blacks equal rights with whites. By contrast, clear majorities of Solid Liberals (77%), New Coalition Democrats (69%) and Hard-Pressed Democrats (62%) say that more changes are needed in order to achieve racial equality. 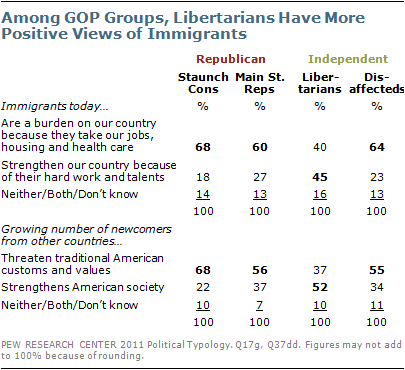 Opinions about immigrants and their impact on the country divide both partisan coalitions. On the Democratic side, Hard-Pressed Democrats are the only group in which a majority views immigrants as a “burden” because of their impact on jobs and social services, and says that the growing number of newcomers to the U.S. threaten traditional customs and values. The three other groups in the Democratic coalition express much more positive views of immigrants’ impact on the country.

Among GOP-oriented groups, Libertarians express more positive opinions about immigrants. A majority (52%) of Libertarians say the growing number of newcomers strengthen American society; Libertarians are divided over whether immigrants strengthen the United States or are a burden. Majorities in the other GOP groups express more negative views of immigrants; most say that the increasing number of newcomers threaten traditional customs and values, and that immigrants are a burden because of their impact on jobs, housing and health care.

As was the case in 2005, social and religious issues continue to divide the core Democratic groups more sharply than the core Republican groups. But looking at the broader GOP coalition, Libertarians stand out for their more moderate views on social issues and relatively low level of religiosity.

About half (53%) of Libertarians say that religion is a very important part of their life. That compares with 91% of Main Street Republicans, 90% of Staunch Conservatives and 84% of Disaffecteds, the other group of GOP-leaning independents. 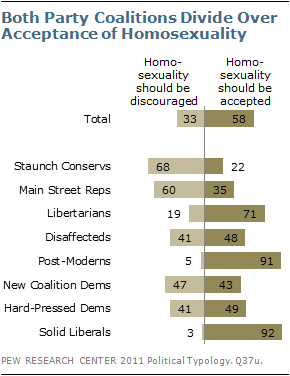 The core Democratic groups are split over the importance of religion and in their acceptance of homosexuality. Nine-in-ten New Coalition Democrats (92%) and nearly as many Hard-Pressed Democrats (86%) say religion is very important personally, compared with just 38% of Solid Liberals. Democratic-oriented Post-Moderns are closer to Solid Liberals than the other two groups – 42% say religion is very important in their life. 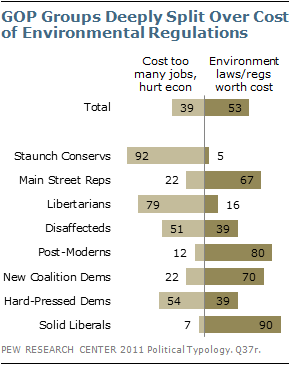 In three of the four groups in the broad Democratic coalition, large majorities say that tougher environmental laws are worth the economic cost. But just 39% of Hard-Pressed Democrats agree, while 54% say such laws and regulations cost too many jobs and harm economic growth. 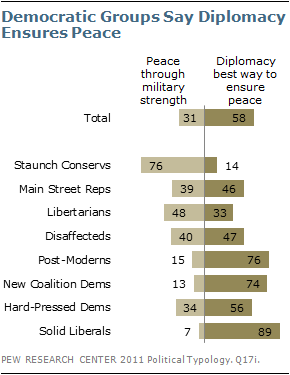 The 2005 typology survey, which was conducted amid contentious debates over the Iraq war, found greater differences between the partisan coalitions in opinions about military assertiveness than within them. But today, the Republican groups in the political typology differ over a fundamental precept in security policy – whether military strength or good diplomacy is the best way to ensure peace.

Democrats are more unified in their belief that good diplomacy provides the best way to ensure peace. Majorities in the three core Democratic groups – as well as 76% of Post-Moderns – say that peace is best ensured through effective diplomacy rather than military strength.

As is often the case, Solid Liberals express the opposite view from Staunch Conservatives: 90% say that relying too much on the use of force creates hatred that leads to more terrorism. Smaller majorities of Post-Moderns (69%), New Coalition Democrats (57%) and Hard-Pressed Democrats (52%) express this view.