The Great Recession has had a major impact on certain segments of the political typology. The varying levels of financial stress that different groups face play a role in shaping their views on issues and policy debates. Beyond the recession’s tangible impact, there are differences in the economic outlook of different segments of the electorate. New Coalition Democrats were hit hard by the recession, but remain fundamentally upbeat about their personal financial situation and future. Others, like the Disaffecteds and Hard-Pressed Democrats, have a far more skeptical outlook.

Financial Stress and the Recession 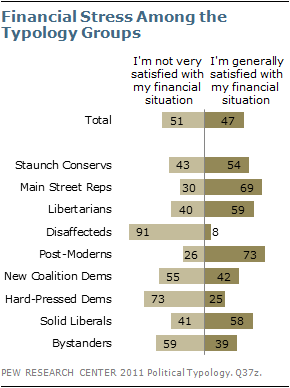 Disaffecteds, Hard-Pressed Democrats and New Coalition Democrats stand out from the other groups in their level of personal financial stress. Fully 83% of Disaffecteds, 68% of Hard-Pressed Democrats, and 57% of New Coalition Democrats say they often don’t have enough money to make ends meet. The other groups do not generally struggle to make ends meet. Two-thirds or more in the five other typology groups say paying the bills is generally not a problem.

Two of the groups were hit particularly hard by the recession and are still struggling. Majorities of Disaffecteds (63%) and Hard-Pressed Democrats (53%) say the recession had a major effect on their personal economic situation and their finances have still not recovered. Further evidence of the recession’s impact on these typology groups is in their reported experiences with unemployment; 71% of Disaffecteds and 63% of Hard-Pressed Democrats say they or someone else in their household has been out of work and looking within the past year.

While most New Coalition Democrats live on tight budgets, and more than half have faced unemployment in their household this past year, they are far less likely than these other financially pressed groups to see the recession as a major factor. Just 41% – about the national average – say the economy had a major effect on their finances that they haven’t recovered from. Most say they either got through the recession unscathed (40%) or were hit hard but have recovered (16%). 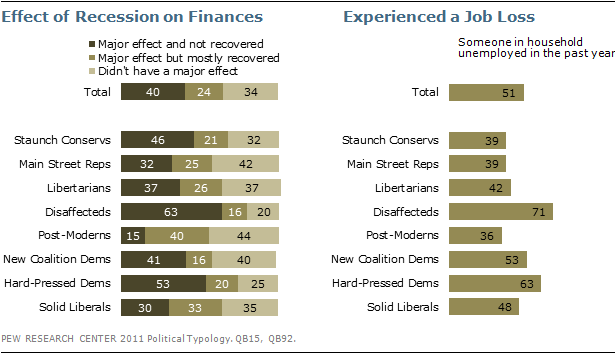 Roughly half of Disaffecteds, New Coalition Democrats and Hard-Pressed Democrats have household incomes below $30,000 a year. Fewer than a quarter in any of the other five groups are in this income range.

But the employment situation across the three lower-income groups differs widely. Just 36% of Hard-Pressed Democrats are currently employed – fewer than in any other typology group; one-in-five (21%) are currently unemployed and looking for work. By comparison, roughly half in the other financially stressed typology groups – the New Coalition Democrats and Disaffecteds – are working. Libertarians and Post-Moderns have the highest employment levels among typology groups, with roughly two-thirds of each group currently working. 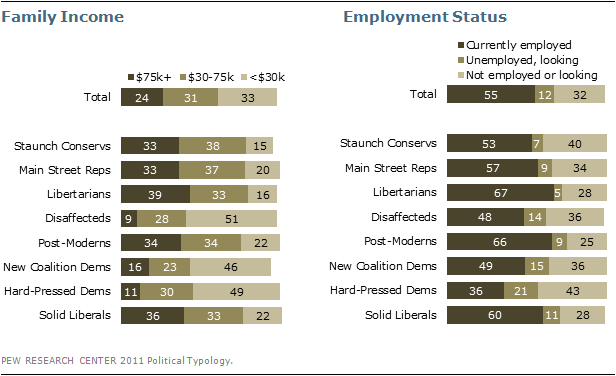 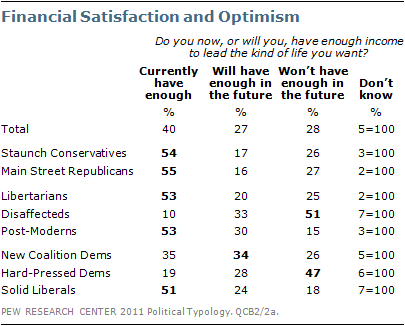 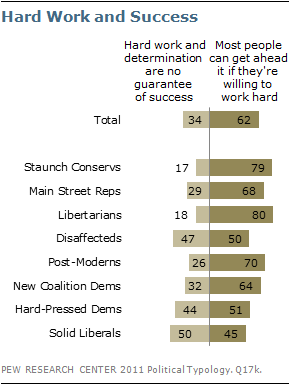 Solid Liberals are among the most skeptical that everyone has it in their power to succeed in life. Half say hard work and determination are no guarantee of success, while 45% say most people can get ahead if they are willing to work hard.