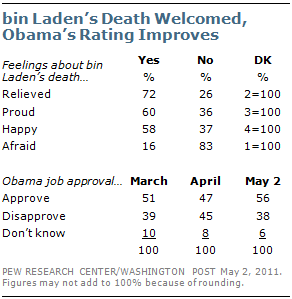 The public is reacting to the killing of Osama bin Laden with relief, happiness and pride. And Americans overwhelmingly credit the U.S. military and the CIA for the success of the operation.

An overnight survey of 654 adults, conducted by the Pew Research Center for the People & the Press and The Washington Post finds that 72% say they feel “relieved” by Osama bin Laden’s death, while 60% feel “proud” and 58% say they are “happy.” Far fewer, just 16%, say the news of bin Laden’s death make them feel “afraid.”

Barack Obama’s job approval rating has jumped in the wake of bin Laden’s killing. In the one-day survey, 56% say they approve of the way Obama is handling his job as president while 38% disapprove. Last month, Obama’s job rating was about evenly divided – 47% approved, 45% disapproved. Obama has gotten about the same boost in job approval as did former President Bush in the days after the U.S. military’s capture of Saddam Hussein in December 2003. Following Saddam’s capture, Bush’s rating rose from 50% to 57%. (A more comprehensive survey will be conducted May 5-8 to follow up on these preliminary reactions to the death of bin Laden and Obama’s job performance.)

However, while Obama’s ratings for dealing with the situation in Afghanistan and the threat of terrorism have improved dramatically – by 16 points and 14 points, respectively, since January – opinions about his handling of the economy have not. Just 40% approve and 55% disapprove of his job performance on the economy, which is little changed from April. 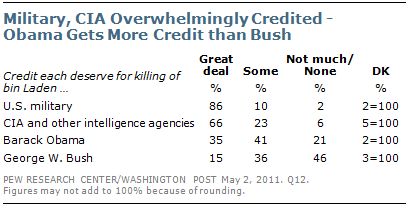 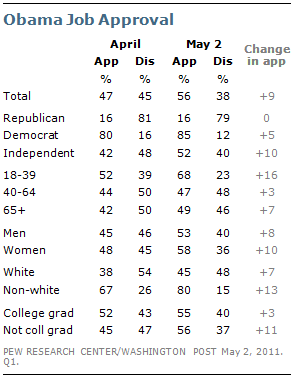 Since early April, Obama’s job approval rating has risen by 10 points among independents (42% then, 52% now) but is unchanged among Republicans at 16%. Approval among Democrats is relatively steady (85% now, 80% last month).

Obama’s job rating has improved more among groups that have been a part of his political base, in particular young people and non-whites. His rating among adults 18 to 39 has climbed 16 points, from 52% to 68%. The change among adults 40 and older has been more modest. Obama also has gained ground among non-whites (up 13 points from 67% to 80%).

While the killing of Osama bin Laden influenced judgments about Obama’s handling of Afghanistan and terrorism, views of his handling 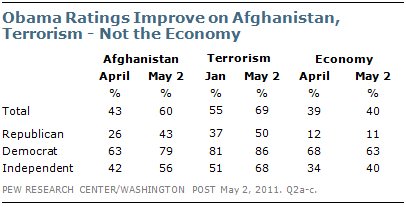 of the economy have not changed. Since last month, Obama’s rating on Afghanistan has risen 17 points among Republicans, 16 points among Democrats and 14 points among independents.

The president also made gains in approval of his handling of terrorism among Republicans (from 37% approval in January to 50% now) and independents (from 51% to 68%). On the economy, a majority of Americans (55%) continues to disapprove, with only 40% approving.

Military and Intelligence Agencies Get Most of the Credit

The public has high praise for the U.S. military’s role in the killing of bin Laden, with 86% saying they deserve a great deal of the credit. Two-thirds (66%) also give a great deal of credit to the CIA and other intelligence agencies who tracked the al Qaeda leader and located his hideout. Both the military and the intelligence agencies receive high marks across the political spectrum. Nearly all Republicans (96%), as well as 82% of Democrats and 88% of independents give the military a great deal of credit. Similarly, 75% of Republicans, 64% of 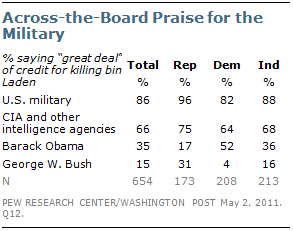 Democrats and 68% of independents give the intelligence agencies a great deal of credit.

Where Did You First Hear… 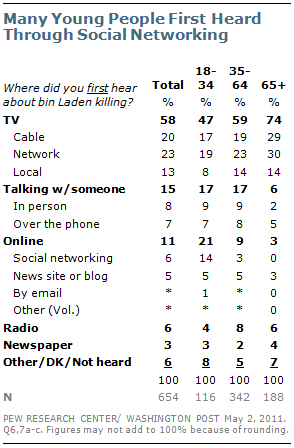 News of bin Laden’s killing by U.S. forces first broke on Sunday evening. Most Americans – 58% overall –say they first heard the news from television, but a substantial proportion of young people first learned of this extraordinary news through social networking.

Among older age groups, far more people heard about bin Laden’s death from television; 59% of those 35 to 64 heard the news this way compared with 9% who heard from the internet. Among those 65 and older, 74% first heard from television and just 3% from any online news source.

Obama Bump Recedes a Bit
Obama: Weak Job Ratings, But Positive Personal Image
Death of bin Laden: More Coverage than Interest
Pessimism About National Economy Rises, Personal Financial Views Hold Steady
Americans are divided by party in the sources they turn to for political news
5 facts about presidential and vice presidential debates
The 2020 Trump-Biden matchup
An examination of the 2016 electorate, based on validated voters
Science and Scientists Held in High Esteem Across Global Publics